Why Nigeria topped the list of African countries for Diaspora remittances - Homestrings. Nigeria got a total of $21 billion as home remittances flows from Nigerians living abroad in 2013. 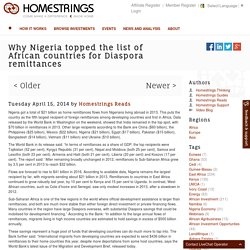 This puts the country as the fifth largest recipient of foreign remittances among developing countries and first in Africa. Data released by the World Bank in Washington on the weekend, showed that India remained in the top spot, with $70 billion in remittances in 2013. Other large recipients according to the Bank are China ($60 billion), the Philippines ($25 billion), Mexico ($22 billion), Nigeria ($21 billion), Egypt ($17 billion), Pakistan ($15 billion), Bangladesh ($14 billion), Vietnam ($11 billion) and Ukraine ($10 billion). Beyond remittances, diaspora and development. Diaspora remittances can spur development WASHINGTON DC, 8 January 2014 (IRIN) - The African diaspora and migrants have for years been instrumental in helping family and friends at home get by, as huge annual remittance flows illustrate, but their contributions beyond remittances could have a significant impact on development, if tapped into. 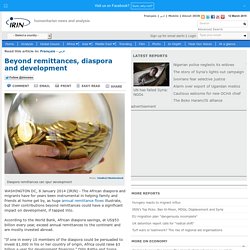 According to the World Bank, African diaspora savings, at US$53 billion every year, exceed annual remittances to the continent and are mostly invested abroad. “If one in every 10 members of the diaspora could be persuaded to invest $1,000 in his or her country of origin, Africa could raise $3 billion a year for development financing,” Dilip Ratha and Sonia Plaza write in the World Bank’s 2011 report, Diaspora for Development in Africa.

Non-traditional private equity financing can be a win-win solution for SMEs. (Credit: Elis Alves, Flickr Creative Commons) The difficulties faced by Small and Medium-sized Enterprises (SMEs) in getting finance, especially in the developing world, have been well documented. 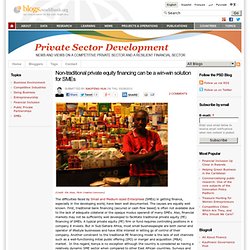 The causes are equally well known. First, traditional bank financing (secured or cash-flow based) is often not available due to the lack of adequate collateral or the opaque modus operandi of many SMEs. Also, financial markets may not be sufficiently well developed to facilitate traditional private equity (PE) financing of SMEs. A typical private equity (PE) firm or fund requires controlling positions in a company it invests.

Supported by the Kenya Ministry of Industrialization, the World Bank financed Kenya Micro, Small and Medium Enterprise Competitiveness Project piloted a new SME risk capital financing model. Those investments were tailored to the financing and cash flow needs of the investees on a case-by-case basis. Dear African VC, angel: international investors are stealing your lunch. Is there a shortage of VC and angel funding in Africa? 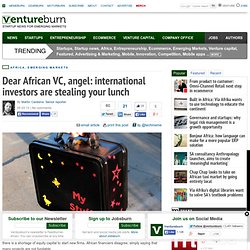 Pose the question to entrepreneurs and the answer is bound to be yes. Joining forces to advocate for a more affordable Internet. Cross-posted from the Public Policy blog Imagine a world where you spent 30% of your monthly income on basic Internet service. 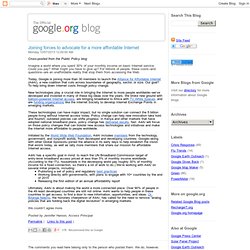 Could you pay? What might you have to give up? For billions of people, these costs--and questions--are an unaffordable reality that stop them from accessing the Web. Today, Google is joining more than 30 members to launch the Alliance for Affordable Internet (A4AI), a new coalition that cuts across boundaries of geography, sector, or size. New technologies play a crucial role in bringing the Internet to more people worldwide--we’ve developed and invested in many of these big ideas over the years. These technologies can have major impact, but no single solution can connect the 5 billion people living without Internet access today. Initiated by the World Wide Web Foundation, A4AI includes members from the technology, government, and nonprofit worlds, from developed and developing countries. 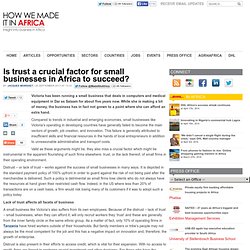 While she is making a bit of money, the business has in fact not grown to a point where she can afford an extra hand. Compared to trends in industrial and emerging economies, small businesses like Victoria’s operating in developing countries have generally failed to become the main vectors of growth, job creation, and innovation. This failure is generally attributed to insufficient skills and financial resources in the hands of local entrepreneurs in addition to unreasonable administrative and transport costs. The East African startup landscape: everything you need to know. Growth first, returns later, says African e-commerce group. Africa Internet Holding, an e-commerce business that has a vision to “accelerate the online shift in Africa” is betting on the continent’s internet revolution to build sustainable online businesses. 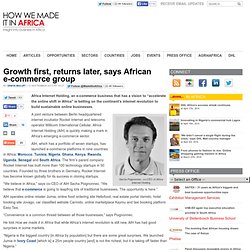 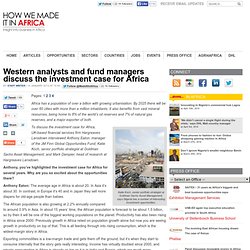 By 2025 there will be over 60 cities with more than a million inhabitants. It also benefits from vast mineral resources, being home to 8% of the world’s oil reserves and 7% of natural gas reserves, and a major exporter of both. Pricing for Business Video Sharing. What's the deal with bandwidth? 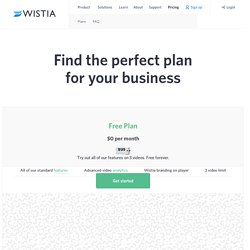 Bandwidth can sometimes be confusing when it comes to video hosting. It’s difficult to anticipate how much you’ll need, and how much it might end up costing you. We've set our bandwidth limits so high, that most Wistia users will never need to worry about it. In fact, 99% of our customers don’t even come close. Google chairman Eric Schmidt shares his thoughts on Africa. Nigerians are a nation of entrepreneurs; while the Kenyan capital of Nairobi has established itself as a technology hub. 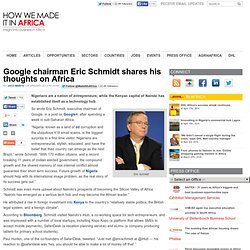 Eric Schmidt So wrote Eric Schmidt, executive chairman of Google, in a post on Google+, after spending a week in sub-Saharan Africa. “Nigeria, known as a land of oil corruption and the ubiquitous 419 email scams, is the biggest surprise to a first time visitor. Nigerians are entrepreneurial, stylish, educated, and have the belief that their country can emerge as the next Brazil,” wrote Schmidt.

12 young African entrepreneurs who will blow your mind, seriously. What where you doing at 15? What about at 19? Or 22? If you are one of these 12 entrepreneurs, the answer is: changing the world. Examining Cameroon’s unique business environment. Following independence, many sub-Saharan African countries adopted the language of their colonisers as the official national language.

English, French and Portuguese are therefore still widely spoken across the continent. Ousmanou Kouotou The Central African country of Cameroon is, however, unique in that it has both English and French as official languages. This is a result of its colonial past where one part of the country was under French control and the other under British rule.

Get Started. Banque mobile : et si les banques tiraient enfin leur épingle du jeu ? The Economist explains: Why does Kenya lead the world in mobile money? PAYING for a taxi ride using your mobile phone is easier in Nairobi than it is in New York, thanks to Kenya’s world-leading mobile-money system, M-PESA. Launched in 2007 by Safaricom, the country’s largest mobile-network operator, it is now used by over 17m Kenyans, equivalent to more than two-thirds of the adult population; around 25% of the country’s gross national product flows through it. M-PESA lets people transfer cash using their phones, and is by far the most successful scheme of its type on earth. Innovation in Africa: Upwardly mobile. Busting the myths about doing business in Africa. Africa needs to deal with the misconceptions around the continent’s size, risks and opportunities by branding and marketing itself better.