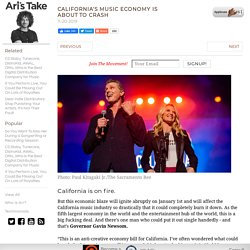 /The Sacramento Bee California is on fire. But this economic blaze will ignite abruptly on January 1st and will affect the California music industry so drastically that it could completely burn it down. As the fifth largest economy in the world and the entertainment hub of the world, this is a big fucking deal. TV Advert Music – Find TV Commercial Songs. Yellowbrick Music. What Is a Needle Drop License and Why Would You Need One? Right now, the site is dominated by transcripts of interviews with music business folk with stories to tell. I conducted these 15-20 years ago, but the history remains. Careful readers will note not only another long gap in posting, but a change of interviewee. 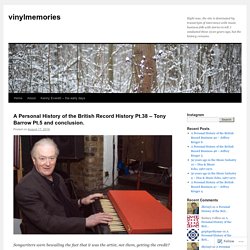 The recent death of Tony Barrow, a name known to everyone if only for one famous client, prompts his replacement for Brian Gibson, who will follow….promise. N.B. About Gaglini Law Group & Gaglini Law Group History. Sally R. 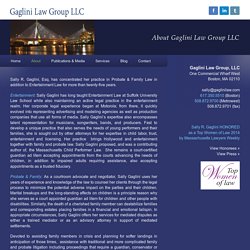 Gaglini, Esq. has concentrated her practice in Probate & Family Law in addition to Entertainment Law for more than twenty-five years. Entertainment: Sally Gaglini has long taught Entertainment Law at Suffolk University Law School while also maintaining an active legal practice in the entertainment realm. Her corporate legal experience began at Motorola; from there, it quickly evolved into representing advertising and modeling agencies as well as production companies that use all forms of media.

Sally Gaglini’s expertise also encompasses talent representation for musicians, songwriters, bands, and producers. Fast to develop a unique practice that also serves the needs of young performers and their families, she is sought out by other attorneys for her expertise in child labor, trust, entertainment and licensing. "The Secret Meeting that Changed Rap Music and Destroyed a Generation" Hello,After more than 20 years, I've finally decided to tell the world what I witnessed in 1991, which I believe was one of the biggest turning point in popular music, and ultimately American society. 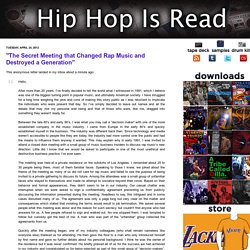 I have struggled for a long time weighing the pros and cons of making this story public as I was reluctant to implicate the individuals who were present that day. So I've simply decided to leave out names and all the details that may risk my personal well being and that of those who were, like me, dragged into something they weren't ready for.Between the late 80's and early 90’s, I was what you may call a “decision maker” with one of the more established company in the music industry.

I came from Europe in the early 80’s and quickly established myself in the business. Average Income of a Musician. There are a lot of different ways to make a living as a modern musician, and it’s fair to say that most professional musicians make their living from not just one job, but from many different jobs. 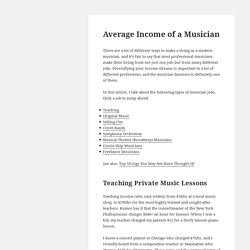 Diversifying your income streams is important to a lot of different professions, and the musician business is definitely one of them. In this article, I talk about the following types of musician jobs. Click a job to jump ahead. See also, Top 10 Gigs You May Not Have Thought Of. Teaching Private Music Lessons Teaching income rates vary widely, from $18/hr at a local music shop, to $150/hr for the most highly trained and sought after teachers. I knew a concert pianist in Chicago who charged $75/hr, and I recently heard from a composition teacher in Manhattan who charges $100 for 50 minutes. A full-time teacher can have upwards of 50 students a week. Say you have 30 students, with 25 of them in 30-minute lessons and the rest in 60-minute lessons. 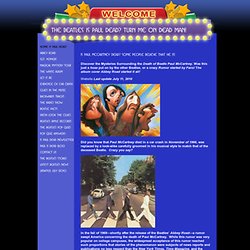 Was this just a hoax put on by the other Beatles, or a crazy Rumor started by Fans! The album cover Abbey Road started it all! Website Last update July 11, 2010. CTI RECORDS: A DISCOGRAPHY. Race Records: the Good, the Bad and the Ugly [Truths] “I am what is known…as a ‘race man’.” 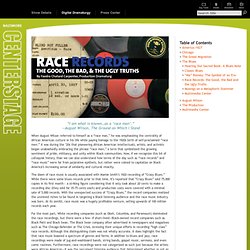 —August Wilson, The Ground on Which I Stand When August Wilson referred to himself as a “race man,” he was emphasizing the centrality of African American culture in his life while paying homage to the 1920s birth of self-proclaimed “race men.” It was during the ’20s that pioneering African American intellectuals, artists, and activists began unabashedly embracing the phrase “race men,” a term that symbolized the growing sentiment of pride, militancy, and unity within Black communities. Now, if we recognize this bit of colloquial history, than we can also understand how terms of the day such as “race records” and “race music” were far from pejorative epithets, but rather were coined to capitalize on Black America’s increasing sense of solidarity and cultural vivacity. The dawn of race music is usually associated with Mamie Smith’s 1920 recording of “Crazy Blues.” All-In-Music Service.