How to Succeed in (the Public Library Online Local Music Collection) Business: Care   Posters in Edmonton’s Capital City Records by Kelly Hiser Rabble is a startup based in Madison, Wisconsin that builds online local music collections with public libraries. 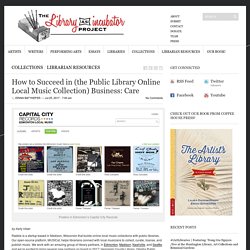 Our open-source platform, MUSICat, helps librarians connect with local musicians to collect, curate, license, and publish music. We work with an amazing group of library partners, in Edmonton, Madison, Nashville, and Seattle, and we’re excited to bring several new partners on board in 2017: Hennepin County Library, Omaha Public Library, and Multnomah County Library. Minneapolis, Omaha, and Portland are home to incredible and distinctive music communities, and we’re excited to listen to their collections later this year. Devo's Brilliant Use of Irony.

Today, Devo is known as a boundary-pushing New Wave band who urged audiences to “whip it good” and poked fun at consumer culture. 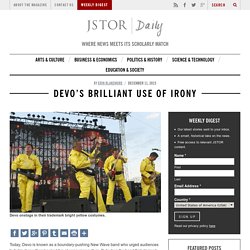 But when the band first stormed the American music scene, writes Theo Cateforis, it confused people with its robotic image. Cateforis explores the idea of the musical man machine—and Devo’s role in exposing the whiteness of the New Wave “robot.” The 7 Aussie Music Industry Events You Should Attend. This Week’s 7 Awesome Jobs In Music That Could Be Yours. Some of the Australian music world’s biggest names often leave doors of opportunity ajar, just waiting for the right kind of professional music fan to come knocking. 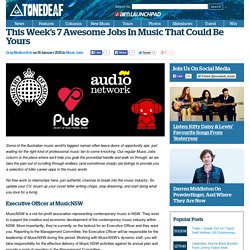 Our regular Music Jobs column is the place where we’ll help you grab the proverbial handle and walk on through, as we take the pain out of scrolling through endless (and sometimes shady) job listings to provide you a selection of killer career opps in the music world. No free work or internships here, just authentic chances to break into the music industry. So update your CV, brush up your cover letter writing chops, stop dreaming, and start doing what you love for a living. Executive Officer at MusicNSW MusicNSW is a not-for-profit association representing contemporary music in NSW. For more details and info on how to apply, head on over to Pedestrian.tv.

Receptionist at Ministry of Sound For more details and info on how to apply, head on over to Pedestrian.tv. Music search. Music search. Why International Cassette Store Day Is Stupid. Trends in music styles much like fashion have the ability to change as fast as the seasons roll by. 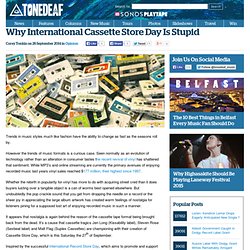 However the trends of music formats is a curious case. Seen normally as an evolution of technology rather than an alteration in consumer tastes the recent revival of vinyl has shattered that sentiment. While MP3’s and online streaming are currently the primary avenues of enjoying recorded music last years vinyl sales reached $177 million, their highest since 1997. Whether the rebirth in popularity for vinyl has more to do with acquiring street cred than it does buyers lusting over a tangible object is a can of worms best opened elsewhere. But undoubtedly the pop crackle sound that you get from dropping the needle on a record or the sheer joy in appreciating the large album artwork has created warm feelings of nostalgia for listeners pining for a supposed lost art of enjoying recorded music in such a manner.

Long declares in a recent piece for NME that the event is “not all nostalgic cool”. Another 7 Amazing Music Docos You Can Watch For Free Right Now. We love a good music doco ’round here at team Tone Deaf, whether it’s of the homegrown variety or the world-travelling film festival kind. 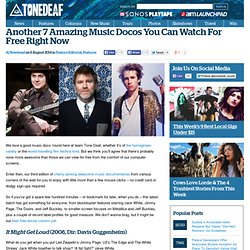 But we think you’ll agree that there’s probably none more awesome than those we can view for free from the comfort of our computer screens. Enter then, our third edition of cherry-picking awesome music documentaries from various corners of the web for you to enjoy with little more than a few mouse clicks – no credit card or dodgy sign-ups required. So if you’ve got a spare few hundred minutes – or bookmark for later, when you do – this latest batch has got something for everyone, from blockbuster features starring Jack White, Jimmy Page, The Doors, and Jeff Buckley, to smaller-screen focuses on Metallica and Jeff Buckley, plus a couple of record label profiles for good measure.

We don’t wanna brag, but it might be our best free docos column yet. It Might Get Loud (2008, Dir: Davis Guggenheim) YouTube To Block Indie Music Videos "In A Matter Of Days" Enjoy the likes of Radiohead, Arctic Monkeys, Vampire Weekend, Adele, and Franz Ferdinand on YouTube while you can. 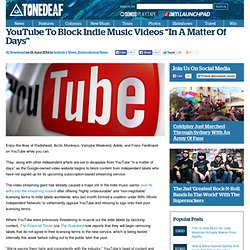 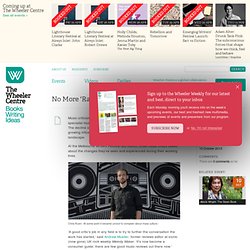 The decline of the ‘long-form takedown’, in favour of positive press. The growing influence of public relations in a cash-strapped media landscape. At the Melbourne Writers Festival last month, three music critics talked about the changes they’ve seen and experienced during their working lives. Chris Ruen: ‘At some point it became uncool to complain about mass culture.’ ‘A good critic’s job in any field is to try to further the conversation the work has started,’ said Andrew Mueller, former reviews editor at iconic (now gone) UK rock weekly Melody Maker. Music Victoria - Melbourne Music City Guide. Videos featuring 22 Melbourne music landmarks including venues, recording studios, and the sites where AC/DC recorded their early albums and ‘Dogs in Space’ was filmed are some of the new features on Victoria’s first dedicated live music guide digital app, Melbourne Music City. 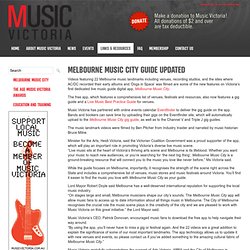 The free app, which features a comprehensive list of venues, festivals and resources, also now features a gig guide and a Live Music Best Practice Guide for venues. Music Victoria has partnered with online events calendar Eventfinder to deliver the gig guide on the app. Bands and bookers can save time by uploading their gigs on the Eventfinder site, which will automatically upload to the Melbourne Music City gig guide, as well as to the Channel V and Triple J gig guides.