The Ugly Numbers Behind Unbundled Cable TV. If you’re a cable TV subscriber who grumbles about paying for dozens of channels your family never watches, a media analyst has a message: That cable bundle carries all sorts of unseen benefits. 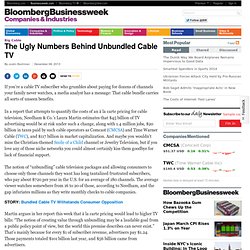 In a report that attempts to quantify the costs of an à la carte pricing for cable television, Needham & Co.’s Laura Martin estimates that $45 billion of TV advertising would be at risk under such a change, along with 1.4 million jobs, $20 billion in taxes paid by such cable operators as Comcast (CMCSA) and Time Warner Cable (TWC), and $117 billion in market capitalization. 15 Technologies The Legacy Content Companies Have Sued In The Past 15 Years.

Many are familiar with the Sony Betamax case, the landmark Supreme Court decision which nearly 30 years ago ruled that selling videocassette recorders to consumers was not copyright infringement. 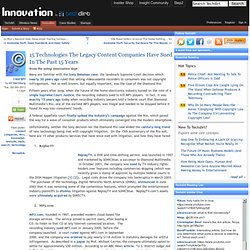 Not as well known, but equally important, was the case of the Diamond Rio. Fifteen years after Sony, when the future of the home electronics industry turned on the vote of a single Supreme Court Justice, the recording industry sued to kill MP3 players. In fact, it was exactly 15 years ago today when recording industry lawyers told a federal court that Diamond Multimedia’s Rio, one of the earliest MP3 players, was illegal and needed to be stopped before it found its way into consumers’ hands. A federal appellate court finally spiked the industry’s campaign against the Rio, which paved the way for a wave of consumer products which ultimately converged into the modern smartphone.

Roseanne Barr: "MK ULTRA Mind Control Rules in Hollywood" Roseanne Barr is an outspoken actress and comedienne who never shied away from tackling difficult and controversial issues, even if that meant being unpopular or being tagged as “crazy” by mass media. 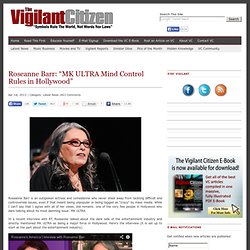 While I can’t say that I agree with all of her views, she remains one of the very few people in Hollywood who dare talking about its most damning issue: MK ULTRA. In a recent interview with RT, Roseanne talked about the dark side of the entertainment industry and directly mentioned MK ULTRA as being a major force in Hollywood. New Study: Megaupload Shutdown May Have Hurt Box Office For Smaller Movies. 'Innocence of Muslims' Actress Attacks Google in New Attempt to Pull Down Trailer. Picture People. 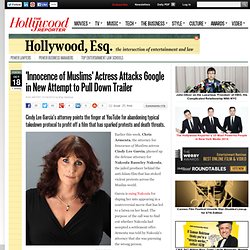 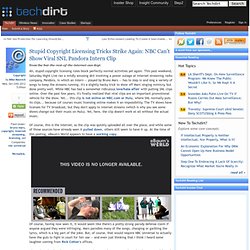 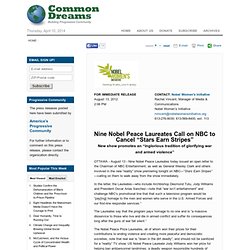 In the letter, the Laureates—who include Archbishop Desmond Tutu, Jody Williams and President Oscar Arias Sanchez—note that “war isn’t entertainment” and challenge NBC’s promotional line that that such a television program would be “pay[ing] homage to the men and women who serve in the U.S. DirecTV Forced to Drop All Viacom Channels Over Fee Dispute. A Big Victory For Fair Use Via South Park, What What (In The Butt), Numa Numa, Afro Ninja, Et Al. A couple years ago, we wrote about the bizarre case filed by Brownmark Films, who produced the "viral" video "What, What (In The Butt)," against South Park for doing a parody of the video. 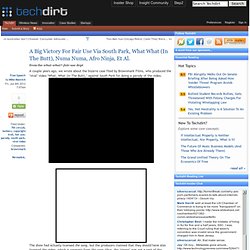 The show had actually licensed the song, but the producers claimed that they should have also licensed the video, which is separate from the song (thus, the "singer" was not a part of the lawsuit). Viacom and South Park argued that this was clear parody and fair use and the district court not only agreed, but dumped the lawsuit without a trial on the fair use claim. Why Hollywood Is Losing the Public Relations War on Piracy (Analysis) Getty Images On Wednesday, to protest President Barack Obama’s decision to withhold unilateral support for a new anti-piracy law, Hollywood has decided to suspend all film productions for a day. 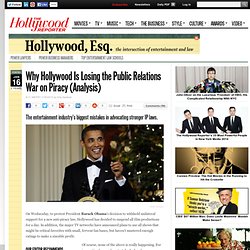 In addition, the major TV networks have announced plans to axe all shows that might be critical favorites with small, fervent fan bases, but haven’t mustered enough ratings to make a sizeable profit. Emma Roberts Responds To Talk Of Nepotism. Boycott "The Grey" For Its Harmful Depictions of Wolves. Public Interest Groups Speak Out About Next Week's Secret Meeting In Hollywood To Negotiate TPP (Think International SOPA) While You Were Searching For Kim Kardashian, Tim Tebow, And Lady GaGa... Why Is NBCUniversal Threatening To Report Commenters They Disagree With To Their Employers? This one is a little bizarre. 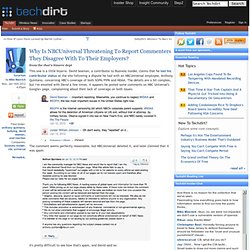 David Seaman, a contributor to Business Insider, claims that he lost his contributor status at the site following a dispute he had with an NBCUniversal employee, Anthony Quintano, concerning NBC's coverage of both SOPA/PIPA and NDAA. Hollywood: SOPA/PIPA DNS Blocking "Off The Table" The Motion Picture Association of America (MPAA), Hollywood's lobbying group, has been one of the strongest supporters of the Stop Online Piracy Act (SOPA) and the Protect IP Act. 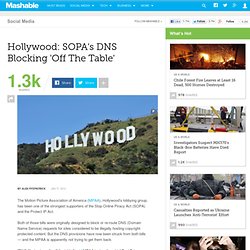 Both of those bills were originally designed to block or re-route DNS (Domain Name Service) requests for sites considered to be illegally hosting copyright-protected content.