The Jazz Standards Progressions Book (PDF version) BUNDLE UP AND SAVE BIG The Ultimate Jazz Harmony Workbook C Bundle $24.99 (SAVE $35) PAY SAFELY WITH PAYPAL You will be immediately redirected to the download page after your payment has been processed. 1300+ Jazz Standard Progressions with Full Harmonic Analysis, Chords, Chord-scales and Arrows & Brackets Analysis in four volumes. 1300+ Jazz Harmony Worksheets to master harmonic progressions in the Jazz Vocabulary. 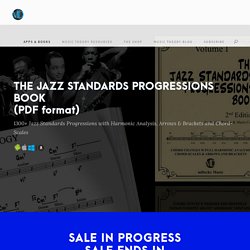 Each worksheet contains the full harmonic analysis of a jazz tune in which you must provide the chord changes. This is an invaluable resource for all Jazz Harmony teachers and students. All ready and set to go worksheets with complete and detailed Harmonic Progressions, Harmonic Analysis, Chord Scales and Arrows & Brackets Analysis. Now you can see the logic behind all those chord-changes and hear jazz standard chord progressions by simply following the Symbology in this Collection.

If humans could hear up to 1 million hertz what would happen? - Quora. The Jazz Standards Progressions Book (PDF version) What Is the Nashville Number System? + Hey there! 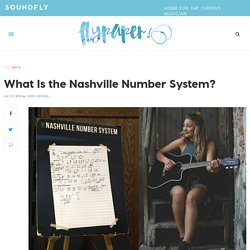 Don’t forget to sign up for our exciting new email magazine, Soundfly Weekly, and learn a new musical skill every single Tuesday! By Soundfly Mentor Andre Madatian If you ask almost any Broadway Street musician in downtown Nashville, they will tell you that the Nashville number system has gotten them through at least a song or two, if not an entire set, on a honky tonk stage at some point in their career. Some don’t even leave the house without their iPad filled with hundreds, if not thousands, of Nashville-style notated charts before heading to work or a weekend run of shows out of town.

But there is something quite definitive and unique about the way Nashville creates their charts — almost like a universal language amongst all of the musicians in the local community. But how are these charts read and understood? HOME - For Bass Players OnlyFor Bass Players Only. 2019 Starbucks Nitro Commercial Song – Can’t Feel The Heat – TV Advert Music. August 19, 1972 (Pilot) Host: John Denver --John Denver - "(Take Me Home) Country Roads" & "Goodbye Again" --John Denver and 'Mama' Cass Elliott - "Leaving on a Jet Plane" duet --Argent - "Hold Your Head Up" & "Tragedy" --Harry Chapin - "Taxi" --David Clayton-Thomas - "Yesterday's Music" & "Nobody Calls Me Prophet" --The Everly Brothers - "All I Have to Do Is Dream" & "Stories We Could Tell" --The Isley Brothers - "Pop That Thang" --Helen Reddy - "I Don't Know How to Love Him" --Linda Ronstadt - "Long Long Time" & "The Fast One" --War - "Slippin' into Darkness" February 2, 1973 February 9, 1973 Host: Johnny Rivers --Johnny Rivers (host) - "Blue Suede Shoes," "Rockin' Pneumonia, Boogie Woogie Flu" & "Got My Mojo Workin'" --The Ace Trucking Company (comedy troupe) - routines about an airplane flight; 2 old friends and a prayer meeting. 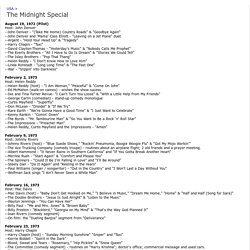 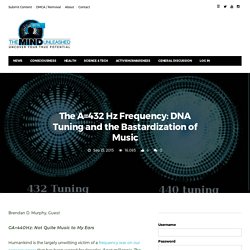 Murphy, Guest GA=440Hz: Not Quite Music to My Ears Humankind is the largely unwitting victim of a frequency war on our consciousness that has been waged for decades, if not millennia. The goal has clearly been to keep us as gullible and subservient as possible, through multifarious means. In modern history in particular, there has been what Dr. The American Federation of Musicians had already accepted the A440 as standard pitch in 1917, and the U.S. government followed suit in 1920. Taggy MATCHER Devil s Pie vinyl at Juno Records. Adobe Just Debuted a ‘Photoshop’ for Audio and It’s Kind of Terrifying. Nov 10, 2016 Adobe, the tech company at the forefront of photo manipulation (and creators of Photoshop), recently debuted VoCo (voice conversion), a ‘Photoshop’ for audio and speech that’s both impressive and alarming. 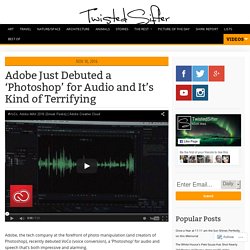 The software was unveiled at the company’s recently completed Adobe Max 2016 conference, which you can see above. Channels: AMAZING, INFORMATIVE, STRANGE Tags: · adobe, audio, demonstration, future, music, photoshop, science, software, sound, tech. Spotify. Log in with Facebook or Forgot your username or password? 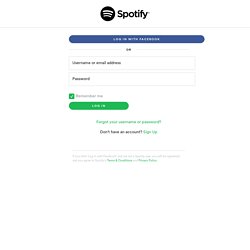 Don't have an account? Sign Up. Quilter Performance Amplification. List Shows By Band. Fan TV - Where to watch The Midnight Special S2 (1973) Listen to Free African Music Online. Features. Features Shoegaze: An Oral History By Ian Gittins on 02.13.15 Members of Ride, Slowdive, Lush, Chapterhouse, Cocteau Twins, Swervedriver and Moose look back at the scene that celebrated itself. 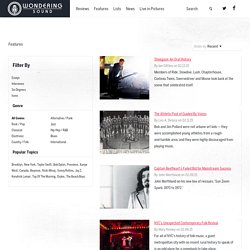 The Athletic Past of Guided By Voices By Leo A. Bob and Jim Pollard were not urbane art kids — they were accomplished young athletes from a rough-and-tumble area, and they were highly discouraged from playing music. 13 1/3: The REAL 500 Best Albums Of All Time - Part 22 of 100 (5 More Incredible Snubs By Rolling Stone) I found this 3 record 1972 release in a box in a corner of an old thrift store with a 25 cent price tag on it some forty years ago! 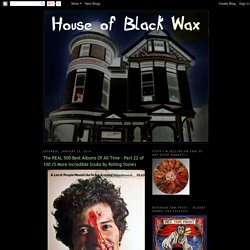 I've still got it! "A Lot Of People Would Like To See Armand Schaubroeck...DEAD" is one of the oddest records you'll ever hear, AND a scathing commentary on society!! I'm not a big Bob Segar fan, but his first album from 1969 was great! Peter King - Jo Jolo. A bit about Black Rock Bands out of Detroit. It was interesting that one refrain in particular was repeated throughout the documentary: black people in Detroit just weren’t doing rock. 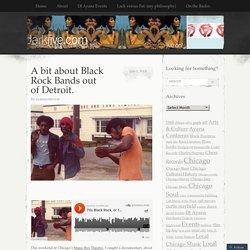 Sure, it wasn’t the norm; but I think that the idea that black people weren’t doing rock is an over-generalization. I would argue that early Funkadelic (especially the album “Maggot Brain“) is as much Rock as it is Funk. The wailing guitars melded seamlessly with gospel-tinged organs and sizzling drums into something quite some distance from Motown. A bit about Black Rock Bands out of Detroit. Tom Tom 84 - Producer. First Listen: Chaka Khan’s daughter Indira “Bathes” us in lovely sounds. Neumann/Avalon U87 Ai Set Z / Vt 737 SP Microphone/Rackmount Channel Strip Bundle. 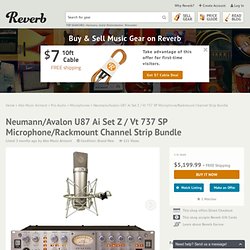 Items will only ship to verified Paypal address. Shipping Policy. January 2009. Not even I'M gay enough to write reviews like this Some new year recovery music for you all ... We went through the career of saxophonist Harold Vick in the "Don't Look Back" post back in October, so check back there for some history, some excerpts from all of his albums; and various discographies. VOCAL - Title. Paragraph. For "grumpy". 01) Baby, It's Cold Outside02) Moonlight In Vermont03) Let It Snow, Let It Snow, Let It Snow04) By The Fireside05) Winter Song06) It Happened In Sun Valley07) I've Got My Love To Keep Me Warm08) The Nearness Of You09) Winter Wonderland10) June In January11) The Wiffenpoof Song12) Sleigh Ride Thank you "Jeronimo".

Chris Squire: “Roundabout” Isolated Bass (Isolated Bass Week) The Dozier Boys Discography. © Robert L. Campbell and Marv Goldberg Latest revision: July 23, 2013 The Dozier Boys in 1948 or 1949. From left: Benny Cotton; Cornell Wiley; Bill Minor; Eugene Teague (with guitar) Revision note: We have added information about the P-Vine Special LP, on which much of the Dozier Boys' United output was reissued or issued for the first time, and on Aristocrat 3001, the group's first release under its own name.

The Dozier Boys were a long-lived vocal/instrumental group. The Dozier Boys began as the Four Tones, singing gospel music at Waller High School. In 1947, the Four Tones met the Four Vagabonds, whose lead singer John Jordan gave them training in singing pop tunes. The Official Miles Davis Site. Jazz Ink - Reviews, Profiles and Photos. Jazz Police - Steve Grossman Quartet at the Jazz Standard, NY 11/19-22. Steve Grossman Steve Grossman returns to New York for four nights at the Jazz Standard on Thursday, November 19th through Sunday, November 22nd. Steve Grossman has lived and worked in Europe for roughly two decades, and he has not performed in New York for at least fifteen years.

John Work III: Recording Black Culture. Milab Microphones - Artists - Rodney Holmes. Rodney Holmes was born in the Bronx in New York City. It was apparent early on that he had a gift for drawing, and later on painting, and this went hand and hand with his fascination with science fiction and fantasy art, books and films. Rodney assumed that he would grow up to become an illustrator and writer of graphic novels and comic books. Played with this trio for second time after 16 years - plainriver music: yuichi hirakawa, drummer in new york city. George Benson - Full Album 1976 - Breezin'