Code economic impact lecg. Egg Producers Federation New Zealand. SAFE: New Zealand Animal Rights. Standard battery and colony battery cages Of the 3.2 million egg-laying chickens in New Zealand, eighty-two per cent are caged.Most caged hens are beak-trimmed; those that are not are kept under very low light levels to reduce feather pecking and cannibalism.One battery hen shed may contain as many as 45,000 caged hens.Each standard battery hen has a floor space smaller than an A4 piece of paper.In December 2012 the Government released a new welfare code for layer hens that bans the standard battery cage yet allows a new kind of battery cage, the colony battery cage.A colony cage provides each hen with 750 square centimetres space (just over an A4 piece of paper in area). 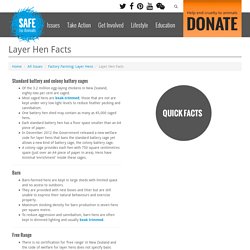 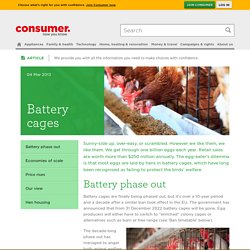 However we like them, we like them. We get through one billion eggs each year. Retail sales are worth more than $250 million annually. The egg-eater's dilemma is that most eggs are laid by hens in battery cages, which have long been recognised as failing to protect the birds' welfare. Battery phase out Battery cages are finally being phased out, but it’s over a 10-year period and a decade after a similar ban took effect in the EU.

The decade-long phase out has managed to anger both animal welfare advocates and the industry. For its part, the industry describes the phase-out timetable variously as “brutal”, “crippling” and “punitive”. Economies of scale Eggs are about as cheap now as they've ever been. The exception is free-range organic eggs, which can retail for around $10, similar to what consumers paid in the '50s. Much of the reason for the plummet in price is the huge economies of scale offered by battery cages. Price rises Our view. Free-range eggs - Consumer NZ. For almost two years, former egg farmer John Garnett got away with selling cage eggs as free range. 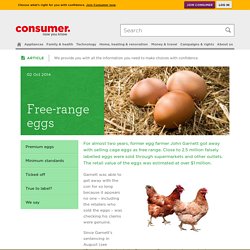 Close to 2.5 million falsely labelled eggs were sold through supermarkets and other outlets. The retail value of the eggs was estimated at over $1 million. Garnett was able to get away with the con for so long because it appears no one – including the retailers who sold the eggs – was checking his claims were genuine. Since Garnett’s sentencing in August (see “Caught out”, below), the Commerce Commission has received information about potential breaches of the Fair Trading Act by other egg producers. The commission says the information is being assessed but hasn’t resulted in any investigation to date. Egg producers peck away at meaning of free range. Last updated 08:24 03/03/2012 Video will play in 5 secondsPlay now! 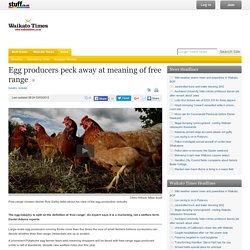 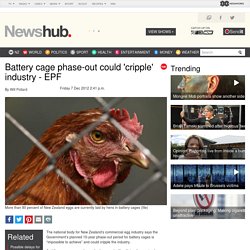 And the new measures have also been met with criticism from animal welfare groups who argue the new cages are no improvement. More than 80 percent of New Zealand eggs are currently laid by hens in battery cages, but from today no new battery cages can be installed by egg producers. Minister for Primary Industries David Carter says the change, part of a new code of welfare for layer hens, address concerns over the effects of battery farming. “Scientific evidence and strong public opinion have made it clear that change is necessary,” he says. How free-range are your eggs? Last updated 05:00 18/08/2013 Video will play in 5 secondsPlay now! 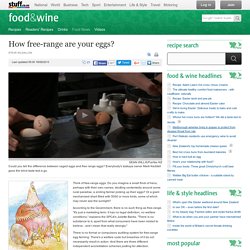 Stop SEAN WILLIS/Fairfax NZ Could you tell the difference between caged eggs and free range eggs? Everybody's Izakaya owner Mark Keddell gave the blind taste test a go. Think of free-range eggs. According to the Government, there is no such thing as free-range. There is no formal or compulsory auditing system for free-range egg farming. Free-range can mean a lot of things, but usually not the bucolic image most consumers would conjure up as they salve their conscience by paying a few extra dollars to buy our favourite protein.

– Poultry industry. At the beginning of the 20th century, New Zealanders ate only about 100 eggs each per year; in 2009 they ate 230 – more than Australia, Canada, Brazil and the UK. 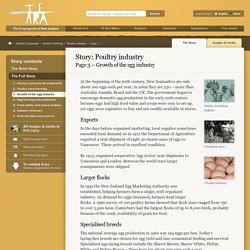 The government began to encourage domestic egg production in the early 20th century because eggs had high food value and coops were easy to set up, yet eggs were expensive to buy and not readily available in stores. Exports In the days before organised marketing, local supplies sometimes exceeded local demand, so in 1912 the Department of Agriculture exported a trial shipment of eight 30-dozen cases of eggs to Vancouver. These arrived in excellent condition. By 1913, organised cooperative ‘egg circles’ sent shipments to Vancouver and London. Larger flocks In 1953 the New Zealand Egg Marketing Authority was established, helping farmers form a single, well organised industry. Specialised breeds The national average egg production in 1960 was 194 eggs per hen.