Huffingtonpost. 12 lessons America can learn from Finland's schools (VIDEO) The Truth About The School System In A Two Minute Video. The truth about school in a two minute video. 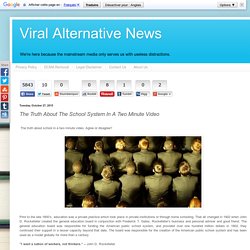 Agree or disagree? Prior to the late 1800’s, education was a private practice which took place in private institutions or through home schooling. That all changed in 1902 when John D. Rockefeller created the general education board in conjunction with Frederick T. Gates, Rockefeller’s business and personal adviser and good friend. “I want a nation of workers, not thinkers.” – John D. Let’s think about this for a minute. Modern day education does indeed have its benefits, but many seem to believe that the negatives far outweigh the positives. Are we indoctrinating our children? Then we have other issues like children with special needs, gifted children, or children being labelled with ADHD, among other things. HERE is an article I wrote one year ago explaining the issue of ADHD, and that is just one small example out of many issues people today are having with modern day education.

Thanks for taking the time to read this article. Chomsky: Corporations and the Richest Americans Viscerally Oppose Common Good. March 7, 2013 | Like this article? 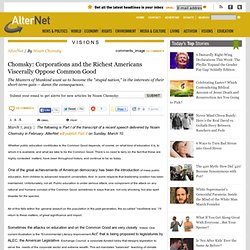 Join our email list: Stay up to date with the latest headlines via email. The following is Part I of the transcript of a recent speech delivered by Noam Chomsky in February. AlterNet will publish Part II on Sunday, March 10. Whether public education contributes to the Common Good depends, of course, on what kind of education it is, to whom it is available, and what we take to be the Common Good. One of the great achievements of American democracy has been the introduction of mass public education, from children to advanced research universities.

All of this falls within the general assault on the population in the past generation, the so-called “neoliberal era.” Sometimes the attacks on education and on the Common Good are very closely linked. “Balanced teaching” is a code phrase that refers to teaching climate change denial, to “balance” authentic climate science – what you read in science journals. True, it is not unanimous. Fuck you. Obey orders. Huey P Newton. School/prison. Student loans. Majority of U.S. public school students are in poverty. For the first time in at least 50 years, a majority of U.S. public school students come from low-income families, according to a new analysis of 2013 federal data, a statistic that has profound implications for the nation. 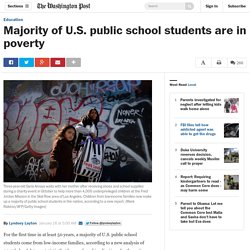 The Southern Education Foundation reports that 51 percent of students in pre-kindergarten through 12th grade were eligible under the federal program for free and reduced-price lunches in the 2012-2013 school year. The lunch program is a rough proxy for poverty, but the explosion in the number of needy children in the nation’s public classrooms is a recent phenomenon that has been gaining attention among educators, public officials and researchers. “We’ve all known this was the trend, that we would get to a majority, but it’s here sooner rather than later,” said Michael A. Rebell, the executive director of the Campaign for Educational Equity at Columbia University, noting that the poverty rate has been increasing even as the economy has improved. Over half in poverty. Free college to everyone. $51 Billion.

Chomsky on debt. How The Government Profits From Student Loans, To The Tune Of $40 Billion A Year. If the federal government were a private lender, it would be one of the world’s three most profitable companies, next to Exxon Mobile and Apple. 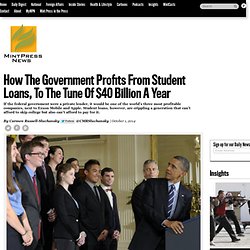 Student loans, however, are crippling a generation that can’t afford to skip college but also can’t afford to pay for it. President Barack Obama, right, with Education Secretary Arne Duncan at his side, second from right, looks back at students as he calls on Congress to stop interest rates on student loans from doubling. (AP/Susan Walsh) WASHINGTON — Roshan Bliss owes nearly $80,000 for a degree he never received. A Master’s degree candidate at the University of Denver, he dropped out two-thirds of the way through.