@petroleoamerica: shale gas. Pushing the envelope in deepwater cementing - Drilling Contractor. Reverse cementing, liquid additives are addressing narrow pressure windows and shallow-water flows, while new centralizers, subs are being engineered to get casing through increasingly tight restrictions By Kelli Ainsworth, Editorial Coordinator Cementing Highlights Cementing technologies and additives are being developed to help maintain a low ECD downhole in order to stay within narrow pore pressure and fracture gradient windows often seen in deepwater.Bowspring centralizers and centralizer subs are being engineered to pass through very narrow restrictions while still providing the necessary standoff.New liquid cement additives do not require pre-blending, enabling operators to adjust amount used on the fly. 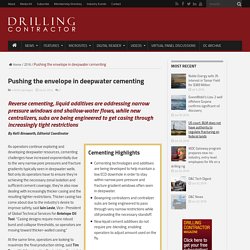 How does Shazam work - Coding Geek. Have you ever wondered how Shazam works? 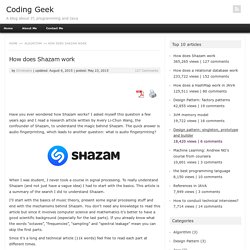 I asked myself this question a few years ago and I read a research article written by Avery Li-Chun Wang, the confounder of Shazam, to understand the magic behind Shazam. The quick answer is audio fingerprinting, which leads to another question: what is audio fingerprinting? When I was student, I never took a course in signal processing. To really understand Shazam (and not just have a vague idea) I had to start with the basics. This article is a summary of the search I did to understand Shazam. Drilling innovations to simplify oil and gas exploration.

11 September 2012 | By Stuart Nathan Drilling innovations aim to use less energy, materials and manpower to tap unconventional reserves When it comes to it, getting oil and gas out of the ground is pretty crude engineering. 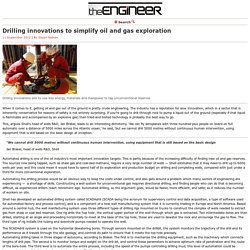 The industry has a reputation for slow innovation, which in a sector that is inherently conservative for reasons of safety is not entirely surprising. If you’re going to drill through rock to pump a liquid out of the ground (especially if that liquid is flammable and accompanied by an explosive gas) then tried-and-tested technology is probably the best way to go. This, argues Shell’s head of wells R&D, Jan Brakel, leads to an interesting dichotomy. “We cannot drill 5000 metres without continuous human intervention, using equipment that is still based on the basic designJan Brakel, head of wells R&D, Shell. Mobile. Reformas en Acción. Como se explicó en el apartado “El porqué de las reformas”, nuestro país requería un cambio radical. 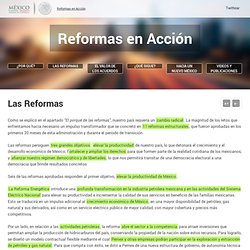 Syncrude. Minesite at Syncrude's Mildred Lake plant Syncrude Canada Ltd. is one of the world's largest producers of synthetic crude oil from oil sands and the largest single source producer in Canada. 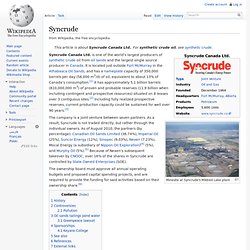 It is located just outside Fort McMurray in the Athabasca Oil Sands, and has a nameplate capacity of 350,000 barrels per day (56,000 m3/d) of oil, equivalent to about 13% of Canada's consumption.[1] It has approximately 5.1 billion barrels (810,000,000 m3) of proven and probable reserves (11.9 billion when including contingent and prospective resources) situated on 8 leases over 3 contiguous sites.[2] Including fully realized prospective reserves, current production capacity could be sustained for well over 90 years.[3] The company is a joint venture between seven partners. As a result, Syncrude is not traded directly, but rather through the individual owners. History[edit] Petroleum Engineering. The Latest Oil Boom, 36,552 Feet Below the Gulf of Mexico - Corporate Intelligence.

Makes investment decision for the Mariner project. The Mariner Field is located on the East Shetland Platform of the UK North Sea approximately 150km east of the Shetland Isles. 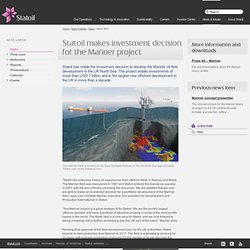 "Statoil has extensive heavy oil experiences from offshore fields in Norway and Brazil. The Mariner field was discovered in 1981 and Statoil entered the license as operator in 2007 with the aim of finally unlocking the resources. Experts Discuss Horizontal Drilling and Hydraulic Fracturing During Toxicolog... A Pemex le interesa comprar crudo colombiano. Automated rig activity analysis offers more precise method for reducing NPT, invisible lost time  Using Halliburton’s automated rig activity measurement and reporting identification system, an operator in the Asia Pacific was able to reduce connection times in 12 ¼-in. well section by a total of 172 minutes. 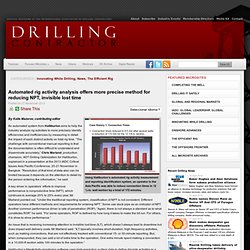 By Katie Mazerov, contributing editor An automated system from Halliburton aims to help the industry analyze rig activities to more precisely identify efficiencies and inefficiencies by measuring in detail the impact of each distinct activity on total rig time. “The challenge with conventional manual reporting is that the documentation is often difficult to understand and disseminate accurately,” Chris Marland, production champion, ADT Drilling Optimization for Halliburton, explained in a presentation at the 2013 IADC Critical Issues Asia Pacific Conference, 20-21 November in Bangkok. Apache’s Brander: Automation could help address invisible lost time in drilling  Graham Brander, Apache Corp Graham Brander, director of worldwide drilling for Apache Corp, used to think that automation is something that should be left to rig contractors to worry about. 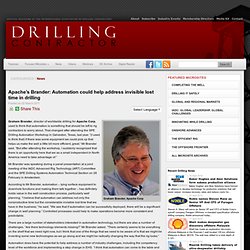 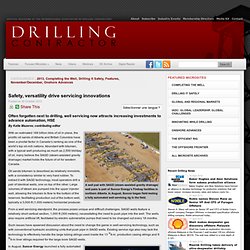 In August, Suncor began field-testing a fully automated well servicing rig in the field. With an estimated 168 billion bbls of oil in place, the prolific oil sands of Alberta and British Columbia have been a pivotal factor in Canada’s ranking as one of the world’s top oil-rich nations. Abundant with bitumen, with a typical well producing as much as 2,500 bbl/day of oil, many believe the SAGD (steam-assisted gravity drainage) market holds the future of oil for western Canada. Oil sands bitumen is described as relatively immobile, with a consistency similar to very hard rubber. From a well servicing standpoint, the process poses unique and difficult challenges. Mexican crude production impacted by US shale development - a Platts Podcast. Risk of Petrobras credit default climbs. 'Slowdown' forecast in E&P spend.

The poll of 466 oil companies by US-based research firm Cowen & Company predicts the rate of spending growth in the international arena, excluding North America, to be cut more than half to 3.8% after two consecutive years of 8% spending hikes. Cowen attributes the trend to a “significantly reduced rate of growth” by major oil companies as well as lower expenditure by Asian national oil companies and budget cuts by Brazil’s state-owned Petrobras.