10 reasons your game studio will never get funding. Jason Della Rocca is a nice fellow who has been in the game industry for a long time. 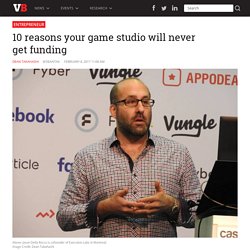 But as the cofounder of Execution Labs in Montreal, he listens to a lot of pitches from game developers. He wants to find the best ones and invest in them, but he finds a lot of the pitches are … unrefined. He spoke at Casual Connect Europe in Berlin today about the reasons why game developers who pitch crap will never get funding. Drew Boortz, managing vice president for Nexon America, noted that it was a bit of a dour talk, and said there has never been a better time to be in games. Michael Chang, senior vice president of corporate development at NCSoft, agreed, noting games is now a $100 billion business.

But Della Rocca played the bad cop delivering the bad news to developers. 1. Della Rocca said that he goes out on a show floor and finds a surprising thing. He said you can tell this by asking the developer what they think of their own game. He added, “Are you doing a robot ninja game? 2. 3. 4. 5. Stardew Valley made way more money than Call of Duty on Steam, and other 2016 sales insights. Steam sales soothsayer Sergey Galyonkin, otherwise known as the creator of Steam Spy, has released a report on sales of games on Steam in 2016. 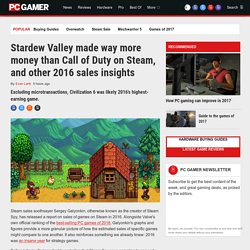 Alongside Valve's own official ranking of the best-selling PC games of 2016, Galyonkin's graphs and figures provide a more granular picture of how the estimated sales of specific games might compare to one another. It also reinforces something we already knew: 2016 was an insane year for strategy games. Before I dig in, it's important to underline that Steam Spy uses sampling to generate its data. These figures are estimates based on that sampling, and are by nature extrapolations. One discrepancy up front, for example: Steam Spy puts Doom as the fifth highest-earner of 2016, and Rise of the Tomb Raider as sixth. Sony have shipped 47.7m PlayStation 4 consoles. Year-on-years sales of PS4 are down in advance of PlayStation 4 Pro release Sony has revealed more than 47.4m PlayStation consoles have been shipped to retailers worldwide. 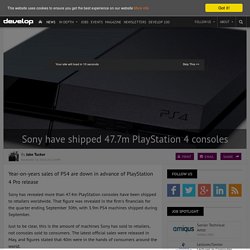 That figure was revealed in the firm's financials for the quarter ending September 30th, with 3.9m PS4 machines shipped during September. Just to be clear, this is the amount of machines Sony has sold to retailers, not consoles sold to consumers. Finding (and Acting on) the White Spaces in Mobile Gaming - Gamesauce: Global Inspiration for Game Developers. There’s no doubt that the mobile games market is growing—even before the debut of Pokemon Go. 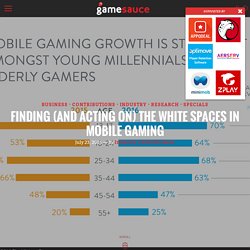 Not only are more people playing on smartphones and tablets, but they’re dedicating increasingly more time and money as well. To grab a bigger share of this growth, developers and publishers need to target the right consumers with the right content. The first step in achieving this insight is understanding the past and future landscape of the mobile games space by addressing two core questions: Where is this growth coming from? And Where will growth come from next? With these questions in mind, Nielsen Games recently analyzed its data on mobile gamers and their thoughts on hundreds of the top mobile games to provide industry-level insight into growth patterns.

We identified that: • Three specific demographics are driving growth • White space opportunity is highest among three key genres • The price of admission is increasing in the puzzle and trivia space. MCV's 2016 Salary Survey: How much are you worth? This year’s Salary Survey highlights how little has changed in games industry pay packets - despite a rise in the number of independent businesses. £29,000 was this year’s UK average salary, which is the exact same number as last year, and broadly in line with the previous two (2014: £30,400 2013: £29,600) Over 1,000 people filled in our latest survey (more than 650 from the UK), making it the most successful salary survey so far. 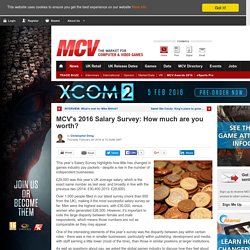 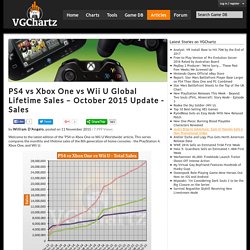 This series compares the monthly and lifetime sales of the 8th generation of home consoles - the PlayStation 4, Xbox One, and Wii U. Looking at the total sales of the PlayStation 4, Xbox One and Wii U in October 2015 we can see that the PlayStation 4 has continued to grow its lead over the Xbox One and Wii U, and is still outselling both of them combined. The Xbox One also continues to increase its lead over the Wii U. Global Mobile Games Revenues to Reach $25 Billion in 2014. Amsterdam/Shanghai, October 20th 2014 – Newzoo, the international games market research firm, announced that its latest Quarterly Global Games Market Update, released to clients last week, includes a significant upward revision of growth forecasts for global mobile game revenues. 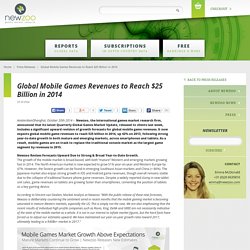 It now expects global mobile game revenues to reach $25 billion in 2014, up 42% on 2013, following strong year-to-date growth in both mature and emerging markets, across smartphones and tablets. As a result, mobile games are on track to replace the traditional console market as the largest game segment by revenues in 2015. Newzoo Revises Forecasts Upward Due to Strong & Broad Year-to-Date Growth. The growth of the mobile market is broad-based, with both “mature” Western and emerging markets growing fast in 2014. Global Games Market Will Reach $102.9 Billion in 2017. AMSTERDAM, 15 May 2014 – The 2014 Global Games Market Report by Newzoo shows the international games market will rocket past the $100 Billion mark in the next three years to reach $102.9 Billion by 2017. 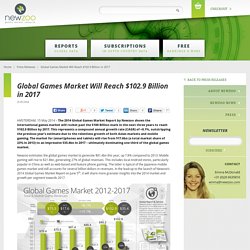 This represents a compound annual growth rate (CAGR) of +8.1%, outstripping the previous year’s estimate due to the relentless growth of both Asian markets and mobile gaming. The market for (smart)phones and tablets will rise from $17.6bn (a total market share of 23% in 2013) to an impressive $35.4bn in 2017 – ultimately dominating one third of the global games market. Newzoo estimates the global games market to generate $81.4bn this year, up 7.8% compared to 2013. Unpacking the King acquisition price.

Last Monday, Activision Blizzard, the 5th largest gaming company in the world by revenue and the owner of multiple venerable franchises such as Call of Duty and Warcraft, announced that it would acquire King Digital, the developer of Candy Crush, for $5.9BN. 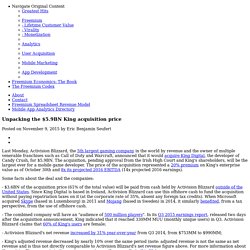 The acquisition, pending approval from the Irish High Court and King's shareholders, will be the largest ever for a mobile game developer. The price of the acquisition represented a 20% premium on King's enterprise value as of October 30th and 8x its projected 2016 EBITDA (14x projected 2016 earnings). Some facts about the deal and the companies: Gaming Company Activision Blizzard Buys 'Candy Crush' Developer. King Digital, the Swedish studio behind the "Candy Crush" puzzle game, is selling itself to Activision Blizzard for $5.9 billion. 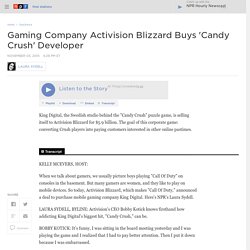 The goal of this corporate game: converting Crush players into paying customers interested in other online pastimes. When we talk about gamers, we usually picture boys playing "Call Of Duty" on consoles in the basement. But many gamers are women, and they like to play on mobile devices. So today, Activision Blizzard, which makes "Call Of Duty," announced a deal to purchase mobile gaming company King Digital. Mobile Expected to Help Drive Digital Games Revenue Past $100 Billion by 2018 - Mobile Advertising News & Information. Mobile is taking over the world. But don’t count out PCs yet. New research and corresponding projections show they will drive an 8 percent annual growth rate in video games in the near future. Juniper Research contends that the digital games industry will generate software revenues of just over $80 billion this year, rising to $104 billion by the end of 2018.

“The majority of this growth will stem from the contributions made by the PC market, with this industry alone accounting for 42 percent of games revenues this year,” according to Juniper. Ebb935_ebd473f704ea4ccab342db1962a18da4.pdf. Survey on Composing for Video Games and Game Sound Design. About the Game Audio Industry Survey The game development web site, Gamasutra, recently published the results of their annual game developer salary survey.

This year, the results were somewhat puzzling, with “audio” salaries coming in higher than every other discipline except “business and management.” ESA-Essential-Facts-2015. Games industry expected to be worth $100 billion by 2017. Newzoo_top_10_companies_by_game_revenues_h1_2014_v2.png (PNG Image, 2056 × 1148 pixels) - Scaled (49%) Game Revenues of Top 25 Companies up 17%, Totaling $25Bn. Sep 30 2014 Today, Newzoo released its new Top 25 Public Companies by Game Revenues ranking, comparing performance in the first half year of 2014 with the same period a year ago. The ranking is a result of Newzoo’s continuous financial analysis effort and showcases an industry flush with vitality, illustrated by strong continued growth of mobile games and the boost provided by the introduction of next generation consoles.

The top 25 companies generated over $25bn in the first half of 2014, an impressive jump of $3bn, or 17%, compared to same period in 2013. Tectonic Rumbles as Tencent Speeds Out of Sight The Top 5 ranking seem deceptively calm, with Tencent holding steady at pole position and the other “usual suspects” jostling for the remaining positions in the Top 5: EA, Activision Blizzard, Sony and Microsoft. Top Android Mobile Games China. Jun 24 2015 Not only did Tencent’s Happy Lord top the grossing rankings in May, but the Chinese internet giant secured number one app store with Myapp overtaking 360 Mobile Assistant. Happy Elements’ Anipop also rose through the charts, both by revenues and installs, after an update with new levels and features was released. Supercell’s Clash of Clans rocketed seven places to place eighth by revenues and is the only Western title, along with Minecraft, in the grossing charts. Read more below. Tencent’s Happy Lord is China’s #1 Android Game by Revenues.

Video Game Rankings. Part of our goal is to supply accurate market intelligence to the games industry across all segments. To achieve this, we continously work with partners and our own data, to publish key rankings on hot topics in the industry. Firstly, we provide key data points on the Global Games Market. Industry Facts - The Entertainment Software Association. 2015 Video Game Statistics & Trends Who’s Playing What & Why? Last year Lisa Galarneau wrote a fantastic article on 2014 Global Gaming Stats. 2014 Global Gaming Stats: Who's Playing What, and Why? Top 25 Companies by Game Revenues. The data is based on analysis of annual and quarterly financial reports published by a number of relevant publicly listed companies. For companies that do not split out their game revenues, the analysis includes estimates, which may or may not be indicated explicitly. Playing games on the PC is making a comeback - CNET.

Playing the Xbox and PlayStation from a living room couch isn't what it used to be. Esports Revenues Surpass $250 Million in 2015, led by US & China. When The Game Industry Thinks You're Too Old to Make Video Games. Tencent continues to reign as world's largest games company. The Top 25 Public Companies Generated $54.1Bn Game Revenues in 2014, Up 10.4% Year-on-Year. Amsterdam/San Francisco/Shanghai, 20 April 2014 – The top 25 public companies by game revenues generated $54.1Bn in 2014 and accounted for 65% of the total $83.6Bn games market, according to Newzoo’s latest public company performance review.