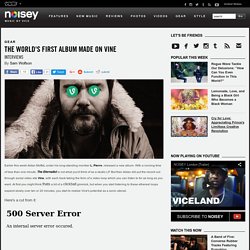 Pierre, released a new album. With a running time of less than one minute, The Eternalist is not what you'd think of as a studio LP. But then Aidan did put the record out through social video site Vine, with each track taking the form of a video loop which you can listen to for as long as you want. At first you might think thats a bit of a clickbait gimmick, but when you start listening to these ethereal loops expand slowly over ten or 20 minutes, you start to realize Vine's potential as a sonic utensil. Here's a cut from it: Moffat is known for his romping adventures in sound—his involvement with Arab Strap, Mogwai, and Bill Wells has produced music that pushes the lyrical and musical conventions of pop. We asked him why he did it. Noisey: Is it weird doing album promotion for six-second songs? Album of 100 Songs, All 30 Seconds Long, Holds Digital Music and Modern Life Over the Coals.

If nothing else, the web has provided out-of-the-box thinkers with an endless playground, albeit one that feels (actually, is) encircled by armed guards and mathematical formulas, working both for and (mostly) against us. 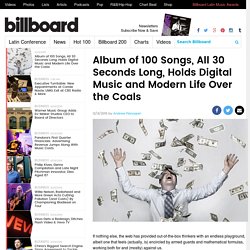 Take Kutiman's achingly beautiful, height-of-humanity quilts composed of YouTube uploads or Vulfpeck's brilliant, cynical ploy for free money. Or Yacht's very existence. The default digital mode may trend towards negativity and fear, but the opportunity to rise above remains steadfastly in front of all our faces. That said: Sometimes negativity is justified. (Ahem.) Welcome To The 15 Second Song.

Music messaging apps have become something of a boom area in recent years with the likes of MSTY, Dubsmash, PingTune, Flipagram and WordUp pursuing a variety of approaches. 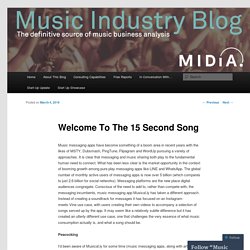 It is clear that messaging and music sharing both play to the fundamental human need to connect. What has been less clear is the market opportunity in the context of booming growth among pure play messaging apps like LINE and WhatsApp. The global number of monthly active users of messaging apps is now over 5 billion (which compares to just 2.6 billion for social networks). Messaging platforms are the new place digital audiences congregate. What It Means to Start a Label in the Digital Age (with Talib Kweli & Jarret Myer) SXSW Music 2016 by SXSW. The real price of a music stream? It just keeps going down and down...

Each week, The MBW Review gives our take on some of the biggest news stories of the previous seven days. 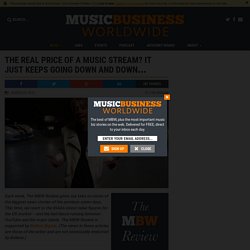 This time, we react to the RIAA’s latest value figures for the US market – and the bad blood running between YouTube and the major labels. The MBW Review is supported by Believe Digital. (The views in these articles are those of the writer and are not necessarily endorsed by Believe.) Brace yourself. The average amount of cash generated by an on-demand music stream in the US last year fell by 24%. Each play across official premium and ad-funded platforms in 2015 – including Spotify, YouTube, TIDAL, Apple Music and Google Play Music – generated an average of $0.0051 for recorded music rightsholders. Streaming is Music’s Biggest Revenue Source; Labels Criticize YouTube.

The music business has been turning into the music streaming business for several years now, but here’s another indicator of the way things are going: Last year, streaming services generated more revenue than any other kind of music sales in the U.S.. 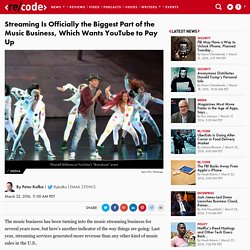 But the big music labels think they can get much more than that, and they want to do it by making it harder to hear free music. Legally, at least. Will Paul McCartney Get The Rights To His Beatles Songs Back? He's Already Working On It. When news broke that the Michael Jackson estate would sell its 50 percent share of Sony/ATV Music Publishing to Sony in a $750 million deal, many wondered whether Paul McCartney would finally be able to acquire the rights to his share of the company’s crown jewel -- the Lennon-McCartney catalog -- since it begins coming up for reversion in 2018. 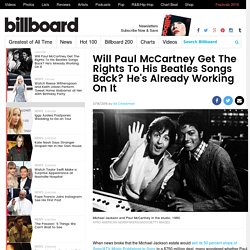 Billboard can confirm that as of Dec. 15, 2015, he has already begun the process. To recap, at some point during the early ‘80s heyday of McCartney’s friendship with Jackson, he pointed out the value of music publishing. Jackson soon received a tip that ATV Music -- publisher of the Beatles’ Lennon-McCartney songs, among many others -- was available, and purchased it for $47.5 million in 1985. McCartney had long coveted his Beatles catalog -- he and Lennon lost out to ATV in a 1969 attempt to purchase Northern Songs, their original publisher -- and he never forgave Jackson for what he considered a betrayal of their friendship.

Rihanna Made the Brilliant Choice to Acquire the Rights to the Master of All Her Albums - The Culture. In a cover story for the April issue of Vogue, Abby Aguirre reports that after she released her last album in 2012, Rihanna left her old label and acquired the masters to all of her previous recordings. 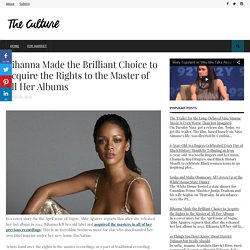 This is an incredible business move for star who also founded her own label imprint under her new home RocNation. Artists hand over the rights to the master recordings as a part of traditional recording contracts. This allows the record company to profit from the music in perpetuity. Pop, rock, rap, whatever: who killed the music genre? Pitchfork, widely viewed as the world’s leading alternative music website, relaunched this week. 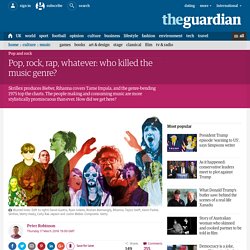 Along with a rather pleasant new look, it announced “a significant new feature”, the ability to view the site according to genre. At first glance this might suggest that genre boundaries – like pop v rock – are as robust as ever. But it could mean the opposite. What does it mean that a site whose name has become synonymous with a specific type of alternative rock, is offering readers the chance to read about nothing but pop, or metal, or rap? And what does it mean if Rostam from Vampire Weekend works with Carly Rae Jepsen, and The Weeknd works with Max Martin? The 1975 have just scored a transatlantic No 1 with an album whose influences range from Yazoo to David Bowie. Last summer, a survey by “millennial insight agency” Ypulse surveyed 1,000 young adults. In 2000, music magazine Melody Maker put Craig David on the cover.