3-D Printing. Gravity Light. The Data-Collecting Company That Wants to Give Earth a "Nervous System" This Artificially Intelligent Boss Means the Workplace Will Never Be the Same. It Looks Like We've Got Ourselves a Good Old-Fashioned Hyperloop Build-Off  The Giant Cranes and Robots That Keep Civilisation Running. SpaceX reportedly files with the FCC to offer Web access worldwide via satellite.

Entrepreneur extraordinaire Elon Musk’s company SpaceX has requested permission from the US Federal Communications Commission (FCC) to test a project to beam high-speed internet via satellite, reports The Washington Post. 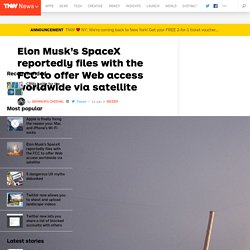 Musk first made his plans known in January at a SpaceX event in Seattle. The idea involves a network of 4,000 small low-cost satellites that would be deployed from the company’s Falcon 9 rocket and orbit Earth, while connecting to ground stations on the West Coast. SpaceX’s tests will determine if its antenna techonology is capable of delivering high-speed internet access to devices on the ground. Amazon says the FAA is so slow, the delivery drone it approved is already obsolete. : Futurology. 7 Ways My Modern Country Turned Into a Dystopia Overnight. Total economic collapse: we all know it happens, but we're much more used to dealing with the concept via Robocop. 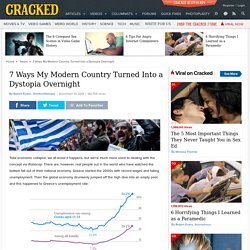 There are, however, real people out in the world who have watched the bottom fall out of their national economy. Greece started the 2000s with record wages and falling unemployment. Then the global economy drunkenly jumped off the high dive into an empty pool, and this happened to Greece's unemployment rate: QuartzPlus, unemployment among unemployed workers is nearly 100 percent. One Chart Showing Who Trades With Who In The World.

OK, so the big economies - US, China, and Germany - all have big slices of the overall circle, and that's no surprise. 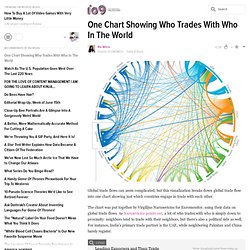 The city-states - Singapore and Hong Kong - and near city-states like the Netherlands and UAE also have big pieces. They have a high population-to-border ratios, though, so that's also not surprising. Some countries have the opposite problem - very low population per border, like the continental empires of Russia, Brazil, and Australia. They have small arcs because they have so many internal areas to trade among. Then there are the countries that punch above their weight in trade terms, ones with low population and big area, yet large trade.

TIL that China has built a new skyscraper every five days, more than 30 airports, metros in 25 cities, the three longest bridges in the world, more than 6,000 miles of high speed railway lines and 26,000 miles of motorway, all in the last 5 years. : today. Google Buys Boston Dynamics in Sensational Eighth Robotics Acquisition. Google just acquired Boston Dynamics. 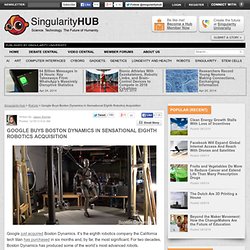 It’s the eighth robotics company the California tech titan has purchased in six months and, by far, the most significant. For two decades, Boston Dynamics has produced some of the world’s most advanced robots. Neil Jacobstein, co-chair of the Artificial Intelligence and Robotics Track at Singularity University, told Singularity Hub, “This is a watershed event. A very big deal. Google is buying up high potential robotics companies. The Freight Train That Is Android. March 24, 2011: March 24, 2011: [Follow Me on Twitter] “People get ready, there’s a train a comin’” - The Impressions From Zacks via Yahoo: Mark Vickery, On Thursday March 24, 2011, 4:58 pm EDT “BlackBerry maker Research In Motion (NasdaqGS: RIMM – News) beat its fiscal 4Q EPS estimates by 2 cents per share, but missed slightly on quarterly revenues and offered guidance well below the current consensus. 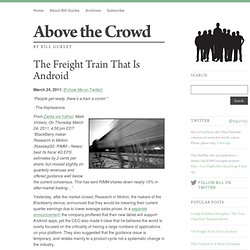 This has sent RIMM shares down nearly 10% in after-market trading…” Yesterday, after the market closed, Research in Motion, the makers of the Blackberry device, announced that they would be lowering their current quarter earnings due to lower average sales prices. Google’s iron grip on Android: Controlling open source by any means necessary. Six years ago, in November 2007, the Android Open Source Project (AOSP) was announced. 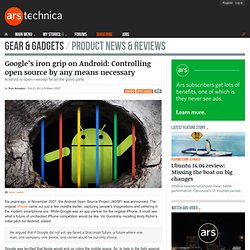 The original iPhone came out just a few months earlier, capturing people's imaginations and ushering in the modern smartphone era. While Google was an app partner for the original iPhone, it could see what a future of unchecked iPhone competition would be like. Vic Gundotra, recalling Andy Rubin's initial pitch for Android, stated: Warren Buffett on castles and moats by Matt Linderman of 37signals. Economy of India. The independence-era Indian economy (from 1947 to 1991) was based on a mixed economy combining features of capitalism and socialism, resulting in an inward-looking, interventionist policies and import-substituting economy that failed to take advantage of the post-war expansion of trade.[21] This model contributed to widespread inefficiencies and corruption, and the failings of this system were due largely to its poor implementation.[21] In 1991, India adopted liberal and free-market principles and liberalised its economy to international trade under the guidance of Former Finance minister Manmohan Singh under the Prime Ministrship of P.V.Narasimha Rao, who had eliminated Licence Raj, a pre- and post-British era mechanism of strict government controls on setting up new industry. 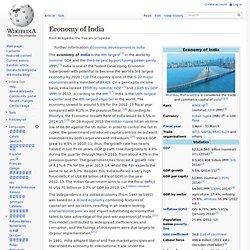 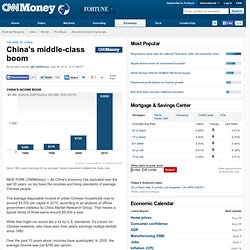 NEW YORK (CNNMoney) -- As China's economy has exploded over the last 30 years, so too have the incomes and living standards of average Chinese people. The average disposable income of urban Chinese households rose to around $3,000 per capita in 2010, according to an analysis of official government statistics by China Market Research Group. Watch 10 seconds of high-frequency stock trading in super slow motion. Presumably, it will take them a bit of time to actually read out the resolution. 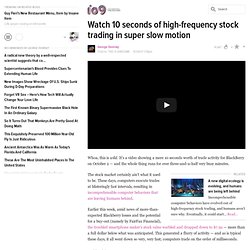 How do you know there weren't computers executing the trade before the news reached Chicago? Tomorrow's cities: Just how smart is Songdo? As cities around the world look to technology to make themselves "smarter" many are watching Songdo. 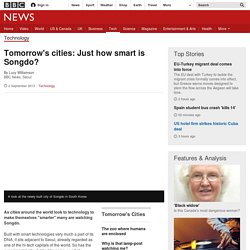 Built with smart technologies very much a part of its DNA, it sits adjacent to Seoul, already regarded as one of the hi-tech capitals of the world. So has the experimental city, dubbed by some as a "city-in-a-box" because of its reliance on technology, been a success? Building a city from scratch offers challenges as well as opportunities. Daryl Oster on Singularity 1 on 1: Evacuated Tube Technologies to Bring Space Travel on Earth. Podcast: Play in new window | Download | Embed Daryl Oster is an inventor and engineer who wants to bring space travel to Earth. The idea is called ET3 - Evacuated Tube Transport Technologies. Hype Builds Before Elon Musk’s August Alpha Plan for SF to LA Hyperloop.

I liked going to the bank drive-through with my mom as a kid. She’d send her checks to the teller inside by shooting a cylinder through a pneumatic tube. I always wanted a ride in that thing. And while there remains a woeful shortage of pneumatic tubes transporting people at the moment—that unhappy state of affairs may not last forever. Elon Musk, the billionaire tech mogul behind PayPal, Tesla Motors, and SpaceX and the entrepreneur who wants to colonize Mars with a vertically landing, reusable rocket—that guy—recently announced he’s been busy thinking about building a pneumatic tube to shuttle people from SF to LA at 600+ mph. Musk Estimates Hyperloop Could Shoot Travelers from SF to LA at 760 Miles Per Hour. Elon Musk has long been hinting at a high-speed form of transportation enigmatically named the Hyperloop.

Earlier this summer, he promised to reveal his Hyperloop plans in August. After a round of media hype and an all-nighter with his engineers at SpaceX and Tesla Motors, Musk recently posted the 57-page Hyperloop Alpha plan online. The man isn’t known for moderation, and the Hyperloop isn’t exactly conservative. Hyperloop Could Totally Work. But Will It Ever Happen?

Young Americans are Abandoning Car Ownership and Driving. Didn’t Get The Job? A Computer May Be To Blame. Robots continue to invade the workplace. Lawyers Object As Computer Program Does Job Better. Robots won't be replacing lawyers anytime soon, but computer programs are already acting like overachieving interns. Over half the world now live in cities according to UN Report. July 12, 2007 A United Nations report coinciding with World Population Day reveals that for the first time in history, more people now live in cities than rural areas. There are now 6.6 billion of us – a figure expected to surge dramatically by 37 percent to 9.076 billion by the year 2050 according to the UN report, with Asia and Africa leading the growth. World Population Day on July 11 is aimed at focusing on efforts to turn the challenges of population growth into opportunities. “What happens in the cities of Africa and Asia and other regions will shape our common future,” says Thoraya Ahmed Obaid, Executive Director of the UN Population Fund.