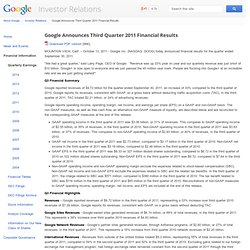 (NASDAQ: GOOG) today announced financial results for the quarter ended September 30, 2011. "We had a great quarter,” said Larry Page, CEO of Google. “Revenue was up 33% year on year and our quarterly revenue was just short of $10 billion. Google+ is now open to everyone and we just passed the 40 million user mark. Q3 Financial Summary Google reported revenues of $9.72 billion for the quarter ended September 30, 2011, an increase of 33% compared to the third quarter of 2010.

Google reports operating income, operating margin, net income, and earnings per share (EPS) on a GAAP and non-GAAP basis. Leaked: Facebook 2011 Revenue Upwards of $5B, $9.2B in 2012 [Sources] Useful Data Sets. Last Updated: January 2014 This page provides information on how to collect data from a variety of sources. it also allows you to look at and download a number of data sets that you might find useful in corporate finance and valuation. 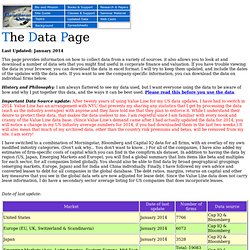 If you have trouble viewing the data in your browser, you can download the data in excel format. I will try to keep them updated, and include the dates of the updates with the data sets. Winter is coming. It doesn't matter if you call it a boom or a bubble. 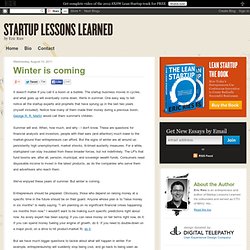 The startup business moves in cycles, and what goes up will eventually come down. 30/10/10. We see a lot of metrics on web and mobile apps. 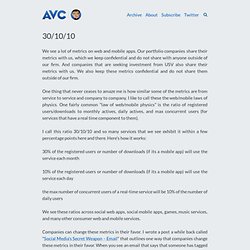 Our portfolio companies share their metrics with us, which we keep confidential and do not share with anyone outside of our firm. And companies that are seeking investment from USV also share their metrics with us. Listed European Technology Companies state - march.11. What is the lifetime value ($) of a Groupon or LivingSocial subscriber. The Tax Haven That's Saving Google Billions. The heart of Google's (GOOG) international operations is a silvery glass office building in central Dublin, a block from the city's Grand Canal. 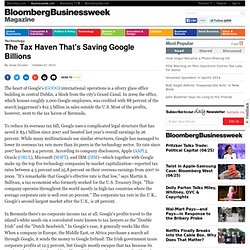 In 2009 the office, which houses roughly 2,000 Google employees, was credited with 88 percent of the search juggernaut's $12.5 billion in sales outside the U.S. Most of the profits, however, went to the tax haven of Bermuda. To reduce its overseas tax bill, Google uses a complicated legal structure that has saved it $3.1 billion since 2007 and boosted last year's overall earnings by 26 percent. While many multinationals use similar structures, Google has managed to lower its overseas tax rate more than its peers in the technology sector. Its rate since 2007 has been 2.4 percent. In Bermuda there's no corporate income tax at all. Transfer Pricing.

2010 Digital 100 Companies 1-100. Demand Media Financials. StumbleUpon Quietly Signs Up 10 Millionth User. Looking at the most valuable Internet Startups. Google Brings Back The Growth In The Third Quarter. (Live Notes) After two quarters of flat sales, Google announced a resumption of growth in the third quarter, with revenues up 7 percent to $5.95 billion. 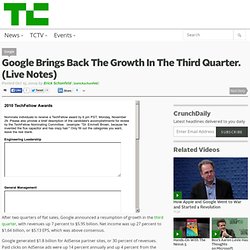 Net income was up 27 percent to $1,64 billion, or $5.13 EPS, which was above consensus. Google generated $1.8 billion for AdSense partner sites, or 30 percent of revenues. Paid clicks on AdSense ads were up 14 percent annually and up 4 percent from the second quarter, but the cost per click (or how much Google and AdSense publishers make from each of those clicks) was down 6 percent annually and 5 percent sequentially. The earnings call is about to start. My live notes below: Mary Meeker: Economy Is Recovering, Mobile Is Exploding, And The. Today at the Web 2.0 Summit in San Francisco, Morgan Stanley Managing Director, Mary Meeker, gave her usual quick presentation with a ton of information. 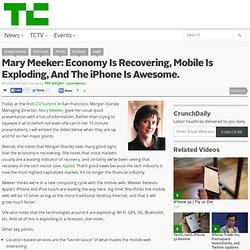 Rather than trying to squeeze it all in (which not even she can in her 15 minute presentation), I will embed the slides below when they are up and hit on her major points. Overall, she notes that Morgan Stanley sees many good signs that the economy is recovering. She notes that stock markets usually are a leading indicator of recovery, and certainly we’ve been seeing that recovery in the tech sector (see: Apple).

That’s good news because the tech industry is now the most highest capitalized market, it’s no longer the financial industry.

Adobe financials. Dow Industrials For Startups? Pre-IPO Index Opens. The Profit and Loss Statement. Today on MBA Mondays we are going to talk about one of the most important things in business, the profit and loss statement (also known as the P&L). 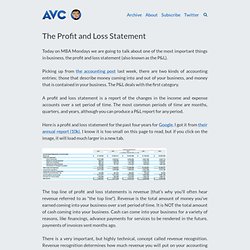 Picking up from the accounting post last week, there are two kinds of accounting entries; those that describe money coming into and out of your business, and money that is contained in your business. The P&L deals with the first category. A profit and loss statement is a report of the changes in the income and expense accounts over a set period of time. The most common periods of time are months, quarters, and years, although you can produce a P&L report for any period. CHART OF THE DAY: Guess What? Google Doesn't Get The Most Revenu. Market data.