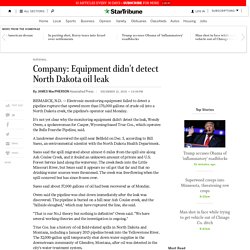 It's not yet clear why the monitoring equipment didn't detect the leak, Wendy Owen, a spokeswoman for Casper, Wyoming-based True Cos., which operates the Belle Fourche Pipeline, said. A landowner discovered the spill near Belfield on Dec. 5, according to Bill Suess, an environmental scientist with the North Dakota Health Department.

Suess said the spill migrated about almost 6 miles from the spill site along Ash Coulee Creek, and it fouled an unknown amount of private and U.S. Forest Service land along the waterway. The creek feeds into the Little Missouri River, but Seuss said it appears no oil got that far and that no drinking water sources were threatened. 5.4 miles of creek polluted by North Dakota oil pipeline spill — RT America. A third of the oil has been cleaned-up a week after a spill the Ash Coulee Creek in North Dakota, up to 5 miles of which were polluted. 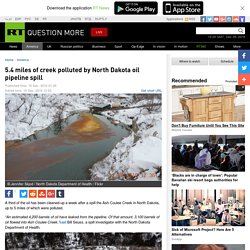 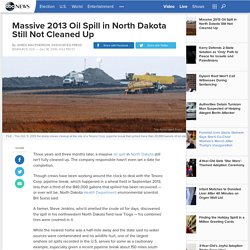 The company responsible hasn't even set a date for completion. Though crews have been working around the clock to deal with the Tesoro Corp. pipeline break, which happened in a wheat field in September 2013, less than a third of the 840,000 gallons that spilled has been recovered — or ever will be, North Dakota Health Department environmental scientist Bill Suess said.

A farmer, Steve Jenkins, who'd smelled the crude oil for days, discovered the spill in his northwestern North Dakota field near Tioga — his combines' tires were covered in it. While the nearest home was a half-mile away and the state said no water sources were contaminated and no wildlife hurt, one of the largest onshore oil spills recorded in the U.S. serves for some as a cautionary example, especially given a recent pipeline break about 150 miles south and ongoing debates over the four-state Dakota Access pipeline. Environmental Impact: Three Years Later N. Dakota Oil Spill Still Not Cleaned Up. Environment Get short URL. 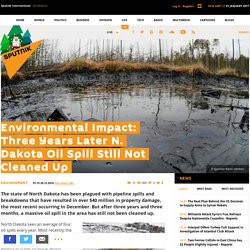 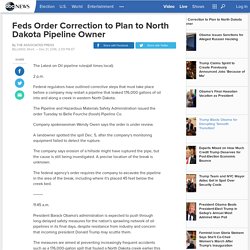 Federal regulators have outlined corrective steps that must take place before a company may restart a pipeline that leaked 176,000 gallons of oil into and along a creek in western North Dakota. $15K fine proposed for Dakota Access. Pipeline construction is complete on both sides of the Lake Oahe crossing, which the U.S. 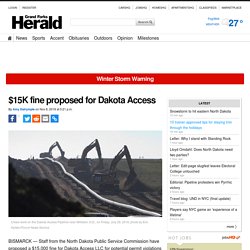 Army Corps of Engineers has not yet authorized, Dakota Access said Tuesday, Nov. 8. The Public Service Commission voted Tuesday to issue a formal complaint to Dakota Access, a subsidiary of Energy Transfer Partners, that alleges the company violated conditions of the permit, including rerouting the pipeline without clearance from the commission. Dakota Access discovered four stone cairns and other artifacts in the pipeline route in Morton County on Oct. 17 and notified the State Historic Preservation Office, which evaluated the site and concurred with the reroute to protect the sites. The Public Service Commission learned about the unanticipated discovery and the reroute on Oct. 25 from the agency’s third-party inspector, then requested information from Dakota Access, which was received on Oct. 27. 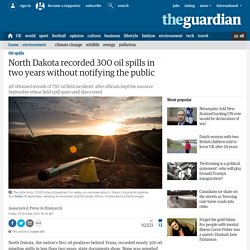 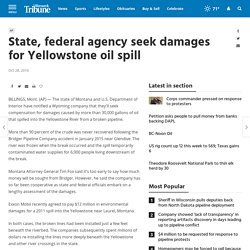 (AP) — The state of Montana and U.S. Department of Interior have notified a Wyoming company that they'll seek compensation for damages caused by more than 30,000 gallons of oil that spilled into the Yellowstone River from a broken pipeline. N.D. Health Dept. confirms oil and brine spill in Mountrail County. PHMSA: ND Fact Sheet. The federal government establishes minimum pipeline safety standards under the U.S. 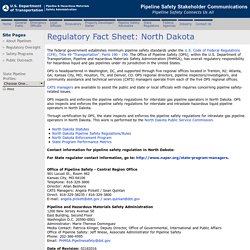 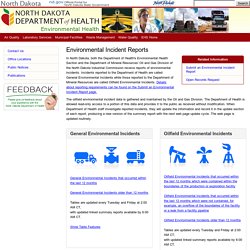 Graphical Information Derived from the Oilfield Environmental Incidents Show Table Features Each table offers the following features: Each table is formatted to an interactive size of 15 x 5 inches. At the top of each table is a toolbar which offers the following capabilities: PHMSA: Pipeline Incident 20 Year Trends, Data Search. Pipeline Incidents PHMSA has collected pipeline incident reports since 1970. The reporting regulations and incident report formats have changed several times over the years.

Oil Spill Claims Search. PHMSA: Pipeline Operator Information Search. Pipeline Operator Information The operator information available below includes operators with hazardous liquid, gas transmission, and/or gas gathering pipelines who have submitted one or more PHMSA-required annual reports for the 2006-2015 time period. Gas distribution assets are not currently included in these reports. A report may be accessed on a particular operator which provides basic mileage, incident, inspection, and enforcement information covering the last five years. Mileage and incident information is provided for all of the hazardous liquid and/or gas transmission and gathering pipelines operated by a particular operator, whether they involve assets which are inspected by PHMSA (referred to as "Federally-inspected") or assets which are inspected by one of PHMSA's partner state agencies (referred to as "State-inspected").

Inspection and enforcement information, however, is only provided for those assets which are inspected by PHMSA. Notes Sources. PHMSA: Program Metrics ND. As part of its annual grant evaluation process, PHMSA performs thorough evaluations of each state pipeline safety regulatory program. To support this evaluation PHMSA and the National Association of Pipeline Safety Representatives (NAPSR) have developed a set of performance metrics. These metrics look at state program performance in six areas: Damage Prevention Program Inspection Activity Inspector Qualification Leak Management Enforcement Incident Investigation. PHMSA: North Dakota Enforcement Program. Operator compliance with state and federal pipeline safety regulations is monitored through a comprehensive inspection and enforcement program. The program is comprised of field inspections of operations, maintenance, and construction activities; programmatic inspections of operator procedures, processes, and records; incident investigations and corrective actions; and through direct dialogue with operator management.

The agency or agencies below work in partnership with the federal Pipeline and Hazardous Materials Safety Administration (PHMSA) to assure pipeline operators are meeting requirements for safe, reliable, and environmentally sound operation of their facilities. The tables below provide a summary of probable violations discovered and compliance actions taken by the agency(ies) as a result of these activities. These data are reported annually as part of the state's annual pipeline safety program certification or agreement to PHMSA. Notes Sources. North Dakota recorded 300 oil spills in two years without notifying the public. Western North Dakota crude pipeline shut down after spill - Energy Transfer Partners, L.P. (NYSE:ETP) Company: Equipment didn't detect North Dakota oil leak. BISMARCK, N.D. Brine contamination to aquatic resources from oil and gas development in the Williston Basin, United States.