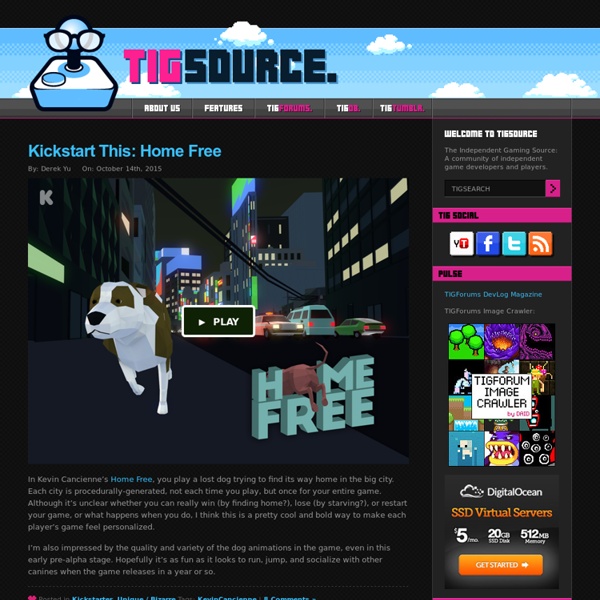 By: ithamore On: March 4th, 2014 Do you want to shoot words, bullets, or missiles? This is socializing brought to you. Pocket Fleet is a MMO space arena shooter with different modes of play and a growing, global community. It is the latest release from Overdose Caffeine: a Turkish group of developers focusing on mobile and browser based games.

IndieGames [By Armin Ibrisagic] Our relationship with DLC at Coffee Stain has been quite rocky. For Sanctum 1, we initially decided to do tons of small DLCs where you could buy a tiny additional piece of content for $1, and we'd let players choose themselves what content they wanted to buy. That didn't turn out great, after only a few months, we had a clustermess of 10 different DLCs, each priced at $1 each, new players had no idea what to buy, and just adding every single one to your Steam cart was a nightmare. For Sanctum 2, we decided to do a Season Pass with big expansions that added tons of more content.

So You Want to Be a Game Programmer? I often get email from people looking to get their first job in the game industry asking me for advice. What are companies looking for in candidates for entry-level programming positions? How come it’s so difficult to land a job? I can’t answer for the industry as a whole, but I can certainly tell you what I am looking for when trying to fill an entry-level programmer position. A few weeks ago, Joel wrote an article with advice for college students looking to become programmers.

A Video Game Development Blog November 17th, 2008 Posted in Reviews, Featured | No Comments » A Digital Dreamer takes a close look at this gem of a PS3 game that every designer should take the time to play. We had heard a lot of great things about LittleBigPlanet for the Playstation 3 months before it was released. We heard things like the way the characters were designed and showed emotions brought instant smiles on the faces of pretty much anyone who had a chance to play it. We had heard about great looking levels, multiplayer interaction, and creation aspects of the game. Little did we know… Little did we know…

Elona Eternal League of Nefia - Official Site Introduction Elona is a freeware roguelike RPG. If you are interested in the game, you can read the following reviews and Elona Manga by Dattan. Note that manga translation is still in progress. You can also review the screenshots of Elona. Opinion: Indie Game Design Do-s and Don't-s: A Manifesto [Veteran indie game creator Edmund McMillen, known for his work on 2005 IGF Grand Prize winner Gish, Time Fcuk, and Super Meat Boy for WiiWare, shares his opinions and manifesto on making indie games, with 24 clear do-s and don't-s to make your art thrive.] One of the most common questions I'm asked in interviews is, "Do you have any advice for independent game developers who are new to the scene, or tips for developers in general?" Well, I actually answered it this time: I came up with this list of indie do-s and don't-s. Now, I'm going to make clear that I'm not perfect and I'm sure as the years go by this list will change. But from where I stand right now, having made independent art/games for a living for the past 10 years, the advice below is crucial to all indie game designers, and all artists for that matter. Also note that when I refer to a "designer" or "artist," I include programmers.

Ludum Dare Ludum Dare 29 Theme Slaughter!! April 10th, 2014 1:16 pm With over 3000 themes suggested by the community, how do we make that more manageable? With this! RB Whitaker's Wiki: Welcome Welcome to this website! This started out as a temporary location for my tutorials and projects, which has become quite popular, and as a result, fairly permanent. As long as Wikidot keeps cooperating with me, I'm planning on staying here. Making and selling visual novels and dating sims - indiePub Games Although both visual novels (VNs) and dating sims have been gaining popularity in western markets, many people still don't know exactly what they are or, more likely, have the wrong idea about them. Visual novels are a graphic novel of sorts with flat or basically animated tableaus and a story with optional paths the reader can follow. Dating sims are very similar in that the reader chooses from on-screen options but the purpose is to develop personal relationships with in-game characters. These games can have rather complex paths with multiple endings.

VideoTutorials Search public documentation: VideoTutorials 日本語訳中国翻译한국어 Interested in the Unreal Engine? Visit the Unreal Technology site. Computer Games I don’t have any decent recent photo so I’ll just go with this one, a few years ago Today I’m 40, and it has been more or less 10 years since I’m doing indie games! The Past All began back in 2003, when I discovered the now defunct Dexterity forums. The Domesday Book - Medieval Demographics Made Easy The Domesday Book Penned by Brandon Blackmoor, based on Medieval Demographics Made Easy by S. John Ross How to Flesh out a Country or Region in Your Fantasy RPG World - Edit Article Edited by Zach Haffey, Maluniu, Glutted, Nicole Willson and 5 others Hello game master/fantasy author.

Opinion: Some Hows And Whys Of Usability Testing [In this reprinted #altdevblogaday-opinion piece, freelance game designer Emmeline Dobson explains why developers need to do usability testing, and offers advice on questioning participants and listening to their feedback.] Usability testing is on the increase, led by companies like PlayableGames and Vertical Slice in the UK, and Microsoft Games Studios having offered its gameplay lab services to its exclusive developers for Xbox from before 20031. Yet it can be regarded as expensive, troublesome to organise, and just a distraction from making features for a game product. It doesn't have to be. Why do usability testing?

Top 10 pixel-art iPhone games Pixel-art, sprite work, and hand-placed coloured dots used to be the best that a game could achieve. But as console power increased and artists became more experienced, these pixelated graphics quickly grew from humble necessity to something of an art form. Those raw, pixelated edges and simplified, bright colour palettes gave way to some of the most beautiful games, emotive characters and immersive worlds. But much in the same way that retro chiptune beats were replaced by orchestral scores and horrfiying EA trax, 3D graphics have wiped out hand-drawn sprites with equally impressive efficiency. But while the home consoles faff about with high-definition this and texture-buffer that, and even consoles like the DS focus on 3D with low resolution textures stretched across bulky, boxy, ugly polygons, there's still one refuge for this almost ancient art form. Beat it!