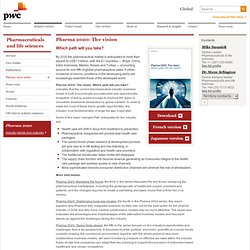 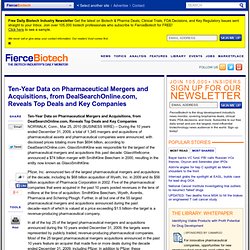 GlaxoSmithKline was responsible for the largest of the pharmaceutical mergers and acquisitions this past decade: GlaxoWellcome announced a $74 billion merger with SmithKline Beecham in 2000, resulting in the entity now known as GlaxoSmithKline. Pfizer, Inc. announced two of the largest pharmaceutical mergers and acquisitions of the decade, including its $68 billion acquisition of Wyeth, Inc. in 2009 and its $56 billion acquisition of Pharmacia Corporation in 2002.

. * To receive this press release via email, send a message to pressreleases@levinassociates.com. Pharmaceutical Market Trends 2010-2011, Pharma Market Forecasting, Pharmaceutical Industry Trends. The global pharmaceutical market research has been done by many companies and almost all of the market reports indicate a significant growth of pharma market in 2010-2011. 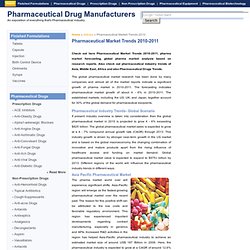 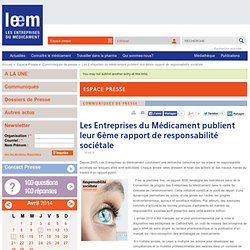 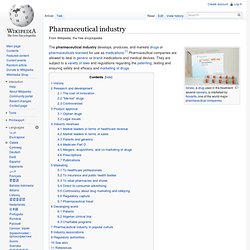 They are subject to a variety of laws and regulations regarding the patenting, testing and ensuring safety and efficacy and marketing of drugs. History[edit] The earliest drugstores date to the Middle Ages. The first known drugstore was opened by Arabian pharmacists in Baghdad in 754,[2] and many more soon began operating throughout the medieval Islamic world and eventually medieval Europe. By the 19th century, many of the drugstores in Europe and North America had eventually developed into larger pharmaceutical companies.

Most of today's major pharmaceutical companies were founded in the late 19th and early 20th centuries. Legislation was enacted to test and approve drugs and to require appropriate labeling. Cancer drugs were a feature of the 1970s. Pharmaceutical Analysis. Pharmaceutical companies are under increasing pressure to change their business model to deal with the reduction of the drug pipeline and increasing competition from generic drugs. They would need to better manage and exploit existing products throughout their entire life cycle. They must also address the needs of the increasing number of stakeholders who influence patients’ access to medicine. An effective and right-sized sales force coupled with a sales strategy that begins at the product’s launch phase and adds value throughout the product life cycle is required. 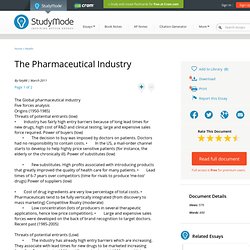 Power of buyers (low)•The decision to buy was imposed by doctors on patients. Doctors had no responsibility to contain costs. •In the US, a mail-order channel starts to develop to help highly price sensitive patients (for instance, the elderly or the chronically ill). Power of substitutes (low) •Few substitutes. •Cost of drug ingredients are very low percentage of total costs. Threats of potential entrants (Low)•The industry has already high entry barriers which are increasing. Pharmaceutical Industry Five Force Model - Research Paper. 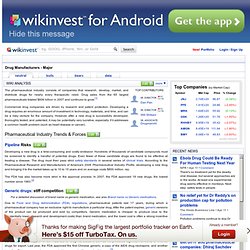 Drug sales from the 65 largest pharmaceuticals totaled $606 billion in 2007 and continues to grow.[1] A 2011 Wakeup Call for Pharmaceutical Companies. By R. 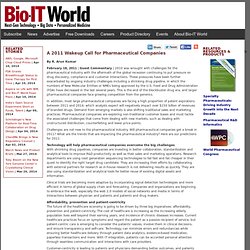 Arun Kumar February 18, 2011 | Guest Commentary | 2010 was wrought with challenges for the pharmaceutical industry with the aftermath of the global recession continuing to put pressure on drug discovery, compliance and customer interactions. These pressures have been further exacerbated by ongoing industry challenges including a shrinking drug pipeline, in which the numbers of New Molecular Entities or NMEs being approved by the U.S. Food and Drug Administration (FDA) have decreased in the last several years. Les stratégies de croissance des groupes pharmaceutiques mondiaux à l'horizon 2015 : Eurostaf étude de marché. SWOT Analysis of Pharmaceutical Industry. A PESTLE Analysis for the Pharmaceutical Industry. : Strategic-Planet. It never ceases to amaze me why so many businesses fail to take the time to look at the macro and the micro environments when completing their business plans and strategies. 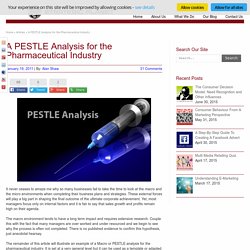 These external forces will play a big part in shaping the final outcome of the ultimate corporate achievement. Yet, most managers focus only on internal factors and it is fair to say that sales growth and profits remain high on their agenda. The macro environment tends to have a long term impact and requires extensive research. Couple this with the fact that many managers are over worked and under resourced and we begin to see why the process is often not completed. There is no published evidence to confirm this hypothesis, just anecdotal hearsay. The remainder of this article will illustrate an example of a Macro or PESTLE analysis for the pharmaceutical industry. Political There is now growing political focus and pressure on healthcare authorities across the world. What pressures will be put on pricing? Economic. 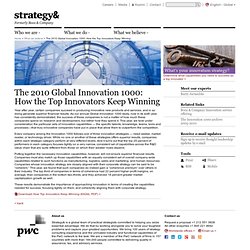 As our annual Global Innovation 1000 study, now in its sixth year, has consistently demonstrated, the success of these companies is not a matter of how much these companies spend on research and development, but rather how they spend it. This year, we took under consideration the particular sets of innovation capabilities — the specific talents, knowledge, teams, tools and processes—that truly innovative companies have put in place that allow them to outperform the competition. Every company among the Innovation 1000 follows one of three innovation strategies — need seeker, market reader, or technology driver. While no one or another of these strategies offers superior results, companies within each strategic category perform at very different levels.