X[ENG_SUB]_an3jeong_170616_Attraction_TV_Ep._52_(Nayoung_TV_#5) [TRANS] Jung Chaeyeon interview with Osen. - Celebrity News & Gossip. After getting the part for Chaeyeon the company had lots of anxiety. 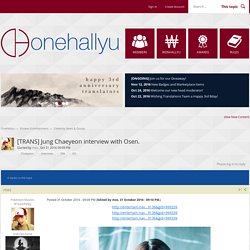 But there was lot of love for the character, so I did it. It was really sad preparing for it alone, but at the shoot, I asked the PD, Key, Gong Myung & Kim Dong Young many questions. They all gave me a lot of help. I wanted to learn properly from the start, but instead I learned a lot while on the job. Also the Director helped make me look even better on the broadcast, so thank you. Compared to Key, I am lacking a lot. Best 15 Photos that Prove DIA's Jung ChaeYeon is a Goddess.

Kpopmap was invited to DIA’s “Happy Ending” Showcase, and we bring you the 10 things only found at a showcase hosted by DIA! 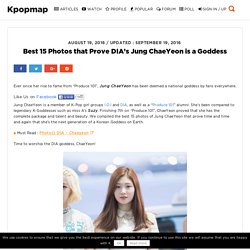 DIA just made their comeback with their 1st full album “Street” and the title track, ‘On the Road’! We brought DIA closer to the AIDs through a live feed of the entire showcase through Twitter – at real time! The I.O.I Debacle: K-Pop's Newest Conundrum - KultScene. 2016 has been a year of many changes for K-pop fans everywhere, particularly in the increasing size of groups. 12-member Cosmic Girls (WSJN), 42 quadrillion-member NCT, and most notably in the Korean spotlight, 11-member I.O.I from popular idol survival show “Produce 101,” which aired from January to April of this year. 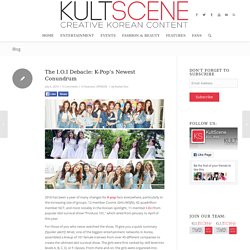 For those of you who never watched the show, I’ll give you a quick summary [Spoiler alert!]. Mnet, one of the biggest entertainment networks in Korea, assembled a lineup of 101 female trainees from over 45 different companies to create the ultimate idol survival show. The girls were first ranked by skill level into levels A, B, C, D, or F classes. From there and on, the girls were organized into different units and tasked with performing with different songs, all while being subject to public vote. As a result, I.O.I started with incredible popularity, as all of the group’s members got tons of exposure from the show. ★SIXTEEN★ - Show ended! All links in the OP, thanks for watching :) - Variety Shows. Real name: Jeon Somi [전소미]English name: Ennik DoumaDate of Birth: Mar 9th 2001Nationality: Korean-Canadian-Dutch (biracial)Family: Parents and 2 younger sistersBlood Type: OHobby: Shopping, shopping, shopping! 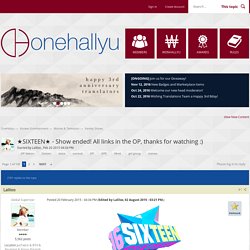 Walking alone, hobby is to celebrate anniversary..? KekeSpecialty: Taekwondo!! Cooking!! [Produce 101] Most memorable parts, controversies, 'Cherry Blossoms' stage, Taxi ~ kkuljaem 꿀잼. Music Video Lessons: CLC’s “Like” is about kidnapping passed out girls, stalking white dudes – Asian Junkie. CLC have returned to us with “Like“, which is supposedly a cute story about a girl’s infatuation with a guy, but is really a story about kidnapping and stalking. 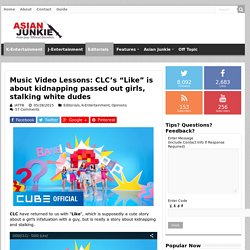 Let’s just walk through the logic in this glorious music video. Okay, so an unconscious girl is out on the street in front of a shop, so call for help, right? Wrong, bitches. [K:OP-ED] 2014: Tragedies, Relationships, Scandals, and Departures. The Korean entertainment industry has never seen a year that was more eventful than 2014. 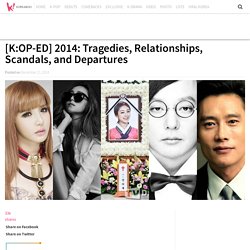 Packed full of scandals and tragedies, it seemed that fans could barely recover from one shocking news before something else shook the industry to its knees. Marriage, dating scandals, new relationships, and breakups were abundant this year. It has been a tumultuous ride full of ups and downs; let’s take a look at some of the biggest events this year. Dating Announcements 2014.1.1 – Girls’ Generation Yoona and Actor/MC Lee Seung Gi. 15 BANNED K-POP MUSIC VIDEOS - TOO HOT FOR TV! KPOP ENCYCLOPEDIA.

From Korea with Love. The video of four Filipina sisters who wowed the judges with their prodigious vocal prowess during the audition of a popular talent search in South Korea called 슈퍼스타 K (Superstar K) has been making the rounds on the internet. 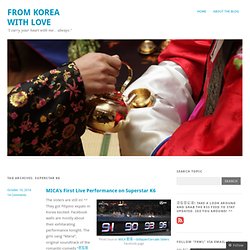 The four talented sisters, Mylene, Irene, Celina and Almira Gollayan, are natives of Isabela. They call their group MICA, taken from the first letters of their names. Before being part of Superstar K Season 6, they had joined various singing competitions in the Philippines and abroad and were known as The Gollayan Sisters. In 2012, they bagged the grand prize in “It’s Showtime”, a noontime musical variety show in the Philippines.

Last year, they flew to Hollywood, California to compete in the World Championship of Performing Arts (WCOPA) from which they won the Senior Grand Championship in the Vocal Group of the World Category. In June, they auditioned for Superstar K6 in Manila and qualified. Kudos to these four incredibly talented girls! What the K-pop industry must learn from Ladies' Code's tragic accident. Almost the entirety of the K-pop fandom was shaken up a few days ago when news broke that idol group Ladies’ Code were involved in a serious car crash that killed member EunB leaving fellow member RiSe and Sojung in a critical condition. 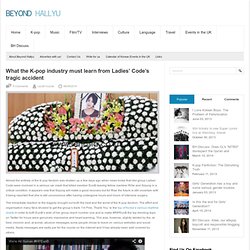 It appears now that Sojung will make a good recovery but for Rise the future is still uncertain with it being reported that she is still unconscious after having undergone hours and hours of intensive surgery. The immediate reaction to the tragedy brought out both the best and the worst of the K-pop fandom. The classiest and sexiest post that ever was both classy and sexy. I've recently written blogs about k-pop's "sexy concepts" and also about "cute concepts", and the non-existent differences between them, because everybody is so fucking fascinated by these topics.

Now I've been alerted to a new contender on the k-pop scene: "classy sexy" concepts. What the fuck even is "classy sexy"? Is it even a real thing? How to be a K-Pop star, or maybe not. We’ve all heard stories about life being a K-pop star, but the K-pop industry is tough and you may or may not want to pursue it after reading this. 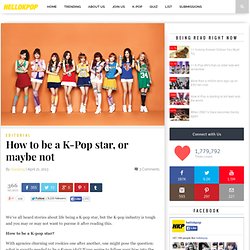 How to be a K-pop star? With agencies churning out rookies one after another, one might pose the question: what is exactly needed to be a K-pop idol? If you aspire to follow your bias into the music industry, here is what you need, based on the analysis of contemporary singers. BOYS WILL BE BOYS … or maybe not. K-POP MV MEANINGS - f(x) RED LIGHT at Welcome! When Korean entertainment takes on itself: IU’s The Red Shoes. Over the next few weeks we will be running a series of posts looking at the ways the Korean media industry has been explored, parodied and criticised in different media texts.

First up: IU’s The Red Shoes. IU’s videos historically have had massive budgets and huge set pieces and The Red Shoes is no different. What does mark it as different from her previous videos such as Good Day and You & I is the much darker tone it takes on. The video uses the existing narrative of The Red Shoes, both a classic fairytale and a classic film, in order to, as I will argue, make a point about the realities of idol life. Philstar Mobile. An Explanation For EXO&apos;s Enormous Popularity.

An Explanation For EXO's Enormous Popularity Aug 31st, 2013 12:00am There are many passionate fans who stan EXO – it's clear for all to see. For a group who are still seen to be rookies in the eyes of many and debuted not that long ago in real terms, it's pretty attention-grabbing when the fans of EXO get banned from music shows and have countless rumours floating around of sasaeng fans performing acts similar to those towards their sunbaes DBSK and JYJ. 12 K-pop Producers and Composers You Should Know. Ever wondered who wrote your favourite K-pop song? Usually when people talk about K-pop, they focus on the idols – the people on stage and in front of the camera.

The ones overlooked are often the creative folk working behind the scenes to create the song and performance that the audience gets to see. Chocolate Love - marketing 101 for deluded k-pop fans. Lately I've been fielding a lot of questions like this: and this: So for those who wonder: 1. How much money idols make, and 2. How much fans and idols alike are being played like suckers by entertainment companies This blog has the answer, in both short and long form. Answers in short form first: 1. Orange Caramel's 'Catallena' Proves That K-pop Now Does Europop Better Than Europe - arcadey : arcadey.

The thing to do right now is to rave about how Orange Caramel’s “Catallena” comeback scalped, slayed, sliced, diced, squished and squashed 2NE1 and Girls’ Generation’s comebacks. [MV Review] Orange Caramel "Catallena" Orange Caramel's back. Eat it up, everyone. May I suggest you pass on the soy sauce, though? After School subgroup Orange Caramel has returned once again to satiate fans of quirky dance music. Orange Caramel bad for humanity? 10 Things Kpop Hits Have in Common, Part 1 (KWOW #100) KPOOOP: KPOP from the viewpoint of a human paperdoll. Ex-TAHITI member Sarah Wolfgang dishes on plastic surgery, eating disorders, body odor. Ex-TAHITI member Sarah Wolfgang (Hanhee) did an AMA on Reddit recently, where she answered questions on everything from a group member smelling like shit to eating disorders.

An Open Letter to the K-pop Industry. Sad but Sexy: The Problem With Girl Group Concepts. Any pop culture is, by nature, heavily influenced by trends but few are more so than K-pop. K-pop trends are obvious, fast-moving and often oddly specific. One such trend which has become particularly prevalent recently is the ‘sad but sexy’ concept being adopted by many girl groups.

Fangirls and their Idiotic Slut-Shaming. Sexy concepts: whore-clicking, or click-whoring? Also Girls' Generation's breaking sex controversy revealed! Please don't judge me by ‘idol standards’- Beyond HallyuBeyond Hallyu. Dear Mr. PD, Give Me a Break! Female bodies on K-pop TV shows. K-Pop 'Slave Contracts' - A Closer Look. Why do they do that? Korean culture and the K-pop industry.