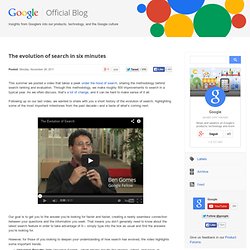 Through this methodology, we make roughly 500 improvements to search in a typical year. As we often discuss, that’s a lot of change, and it can be hard to make sense of it all. Following up on our last video, we wanted to share with you a short history of the evolution of search, highlighting some of the most important milestones from the past decade—and a taste of what’s coming next. Our goal is to get you to the answer you’re looking for faster and faster, creating a nearly seamless connection between your questions and the information you seek. That means you don’t generally need to know about the latest search feature in order to take advantage of it— simply type into the box as usual and find the answers you’re looking for. Chapter 3: Google Penguin, Panda, & Hummingbird.

Search engine algorithms are based on a simple premise: searchers want an answer to their queries. 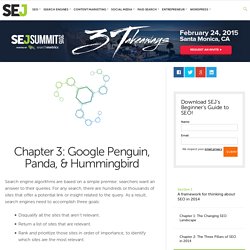 For any search, there are hundreds or thousands of sites that offer a potential link or insight related to the query. As a result, search engines need to accomplish three goals: Disqualify all the sites that aren’t relevant.Return a list of sites that are relevant.Rank and prioritize those sites in order of importance, to identify which sites are the most relevant. Because no single factor is sufficient to provide these insights, Google and other search engines use complex algorithms that blend dozens of factors. 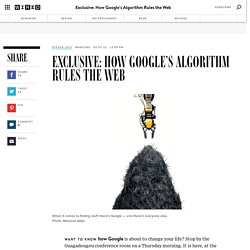 Stop by the Ouagadougou conference room on a Thursday morning. It is here, at the Mountain View, California, headquarters of the world’s most powerful Internet company, that a room filled with three dozen engineers, product managers, and executives figure out how to make their search engine even smarter. This year, Google will introduce 550 or so improvements to its fabled algorithm, and each will be determined at a gathering just like this one. The decisions made at the weekly Search Quality Launch Meeting will wind up affecting the results you get when you use Google’s search engine to look for anything — “Samsung SF-755p printer,” “Ed Hardy MySpace layouts,” or maybe even “capital Burkina Faso,” which just happens to share its name with this conference room.

Exclusive: How Google’s Algorithm Rules the Web. Watch This Documentary: The History of Internet Search and Google. Before there could ever be SEO (Search Engine Optimization), there needed to be search engines to optimize for in the first place! 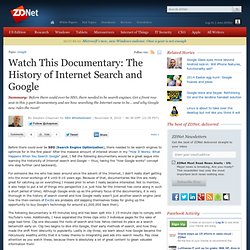 After the massive amount of interest shown in my "How It Works: What Happens When You Search Google" post, I felt the following documentary would be a great segue into learning the historicity of Internet search and Google -- thus, taking the "how Google works" concept one step further (and backward). For someone like me who has been around since the advent of the Internet, I didn't really start getting into the inner-workings of it until 9-10 years ago. Because of that, documentaries like this are really great for catching up on everything I missed prior to when I really became interested.

Not to mention, it also helps to put a lot of things into perspective (i.e. just how far the Internet has come along in such a short period of time). The following documentary is 45-minutes long and has been split into 3 15-minute clips to comply with YouTube's rules. How Search Works - The Story – Inside Search – Google. How much Google can you take? The relationships human beings have with brands are little different from the relationships they have with lovers. 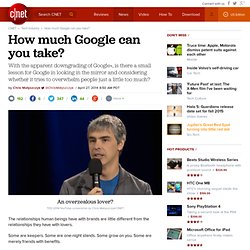 Some are keepers. Some are one-night stands. Some grow on you. Some are merely friends with benefits. Some, though, just don't take the hint. A complicated courtship. Googled: An Excerpt From Ken Auletta's New Book. Googled by Ken Auletta On a sunny July afternoon in Sun Valley, three friends who had competed and cooperated for a quarter century -- Robert Iger, the CEO of Disney, Les Moonves, the CEO of CBS, and Peter Chernin, then the COO of News Corp -- gathered for sodas. 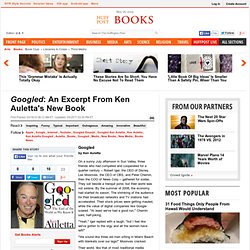 They sat beside a tranquil pond, but their world was not serene. By the summer of 2008, the economy had started its swoon. The shrinking of the audience for their broadcast networks and TV stations had accelerated. Their stock prices were getting mauled, while the value of digital companies like Google soared. "Yeah," Iger replied with a laugh, "but I feel like we've gotten to the orgy and all the women have left! " "We sound like three old men sitting in Miami Beach with blankets over our legs! " Google: What Goes on Behind the Curtain? Browse Inside What Would Google Do? by Jeff Jarvis.