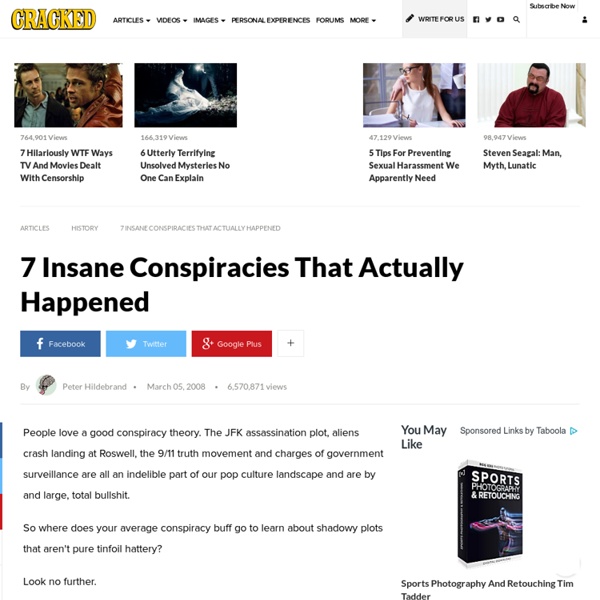 The Plan: A group of conspirators (including Guy Fawkes, Natalie Portman and Hugo Weaving) decided to blow the fuck out of the British House of Parliament, thus killing pretty much all of the aristocracy, as well as King James I. In May of 1604, a group of Britons who were fed up with King James's rule met with Robert Catesby. As Catholics, they were tired of the Protestant government. In accordance with the teachings of their faith, they apparently decided that the best way to solve their problems was to kill everyone. The conspirators were taking up residence across the street from The House of Lords, the building the upper house of parliament met in. Their original plan was to burrow their way to the underground foundation of The House of Lords, and lay their explosives there. How did that work out? Lord Monteagle None of the protestant politicians were killed, but the plan wasn't a complete failure. Related:  understanding it all • important

Reality Has Been Scripted by the Manipulation Masters : The 6 Creepiest Lies the Food Industry is Feeding You Kobe Beef Doesn't Really Exist Getty Seasoned carnivores know that Kobe beef is just about the cream of the crop, if you can afford it. Luckily, the international market has made Kobe beef pretty widely available. Via Gothamist.com"Here's your wrong burger with a side order of french lies. Say, ever wonder where all this sudden, delicious Kobe influx comes from? The Horror: Nowhere, that's where. GettyNope, doesn't count. In fact, the strict rules that apply to Kobe production aren't in compliance with U.S. legislation, which technically makes the meat more or less illegal stateside. So wait, what are they actually feeding us when we pick "Kobe" off the menu? Getty"That'll be a million dollars." When you buy something labeled "Kobe beef," it's likely that you're actually buying something with a vague explanation, like it's prepared "in the style" of a Kobe steak, which probably isn't enough to warrant the $80 price tag, unless you're one of those creepy Japanophiles. Getty"They're on to us.

The Beauty Look Book The Wired Home Weblog - Transform your home into a digital media center - Is TiVo On The Rebound? » Big Government conspiracy theories become reality: Fluoride, cancer, chemicals and more Alex Jones S. D. WellsNatural News Oct 1, 2012 What if you just found out that cancer in America began when food processing plants became prominent and people moved closer to the industrial plants, where the jobs were, just after World War II? What if CNN, Dateline NBC, 60 Minutes, or some other network prime time “mainstream news” program did a HUGE NATIONAL STORY about how fluoride in public water is causing Alzheimer’s, Osteoporosis and Arthritis, and nearly every city and county in America would be removing it from the public water supply starting first thing Monday? Then you start thinking, wait a second, could people go to jail for coming up with this idea, of fluoridating the water, or did they already go to jail for MASS MURDER? Toxic water was a planned conspiracy A study published in Environmental Health Perspectives just two years ago confirmed that fluoridated water causes brain damage in children. Getting paranoid yet? The gap is narrowing. The WAR for chemical free food and water

Beginning and End of Life on Earth in 2 Years The evolution of modern humans has been astronomically unlikely; our time on the planet has been fleeting and continually on a knife-edge. The odds are that our species will blink out of existence, just like all of our closest relatives. Earth’s history and future in two 1 year timelines. 1-3 January Earth forms from small grains of rock and ice revolving around the young Sun. Image by David A Hardy 4 January Moon forms from material from a giant impact by a Mars-sized body hitting the nearly formed proto-Earth. Image by James Garry, Fastlight Artwork 8-24 January Earth’s surface is mostly molten rock, gradually cooling as heat radiates into space. 24 January – 16 February Millions of ice rich asteroids and comets bombard Earth. 17 February As continents form, first life forms and self-replicating molecules evolve. Image by David A Aguilar 5 March Earth’s oceans achieve their present volumes. 29 March Bacteria develop primitive forms of photosynthesis. 7 May Image © Brian Smallwood – spaceprime.com

rrron: Лучшие перевоплощения звезд для ролей в кино Информация об этом журнале Цена размещения200 жетонов Социальный капитал568 В друзьях у5 682 Длительность24 часа Минимальная ставка200 жетонов Посмотреть все предложения по Промо The Small Print Project Ozspeaksup's Blog The 19th century British slave-owners given huge payouts after abolition – and their famous descendants who benefited Previously unseen documents reveal how Britain’s wealthiest families received millions of pounds in compensation after slavery was abolished in Britain’s colonies in 1833. Their descendants include Prime Minister David Cameron. Historian Dr Nick Draper of University College London has spent 3 years compiling a database of 46,000 records of compensation given to British slave-owners, which will be launched online tomorrow. He found that as many as one-fifth of wealthy Victorian Britons derived their fortunes from the slave trade and the records show exactly who received what in payouts from the British Government when it was abolished – to the potential embarrassment of their descendants who still indirectly enjoy the proceeds. Among them are Prime Minister David Cameron, former government minister Douglas Hogg, and the chairman of the Arts Council Peter Bazalgette. Dr Draper said: “There was a feeding frenzy around the compensation.” David Cameron and slave-owning ancestor Sir James Duff

rrron: Необычная женская обувь by Kobi Levi Информация об этом журнале Цена размещения200 жетонов Социальный капитал563 В друзьях у5 679 Длительность24 часа Минимальная ставка200 жетонов Посмотреть все предложения по Промо Carving A Path To Financial Freedom: Mint’s Personal Finance Blogger Picks | MintLife Blog | Personal Finance News &amp; Advice photo: AMagill This week, we’d like to take you through a series of articles that highlight the stages of life that have an impact on our finances. We’ll share some insights by personal finance bloggers on matters involving college, work and career, and becoming financially successful. 1. Personal finance may not be the most exciting subject for everyone. 2. People attend college to invest in their future — and many folks accumulate debt just to get that degree. 3. While you hang out in the corridors of your college or university, take a moment to think about your future: reflect on your dreams and develop your personal goals and visions. 4. When you’re finally out of school and ready to take on the world, the issues of work and life balance may enter the picture. 5. 6. Those deep in debt often fantasize about paying off all their obligations one day and becoming financially free. 7. So what’s your personal financial journey like?

Election 2012 - Smoke, Mirrors and Hot Air 08/11 by Fred CoHost The Jackson 2 follow Call in to speak with the host The "Election 2012 - Smoke, Mirrors and Hot Air" will examine the acrimonious, rhetoric surrouding the Presidential election. This race is not like any other and it certainly "ain't" pretty. The campaign is being fought through distortion, manipulation and outright lies. Jed will be interviewing TomCat of Politics Plus with Tom to discuss the nature of the ad campaigns of both candidates. Please join us in the chatroom or call in with your comments at (347) 677-1814. Tags: American Politics Liberal Democratic Discussion Humour h:262721s:3490217archived Recommended For You Comments

Ketamine Depression Cure? 'Special K' Treats Symptoms Within Hours, Study Reports Dedicated club drug users may be on to something with 'Special K.' A new study, conducted by researchers at the Baylor College of Medicine in Houston and Mount Sinai School of Medicine in New York, shows that the experimental party drug, ketamine, can alleviate depression symptoms in just hours, according to a news release. In the largest study ever conducted on ketamine's antidepressant capabilities, the drug, which is legally used as an anesthetic, was shown to quickly reduce depression in participants after just one 40-minute IV dose. Most medications available today can take days, if not weeks, to reduce symptoms. The findings were presented at the annual meeting of the American Psychiatric Association on Monday, but have yet to be subject to peer review. A group of 72 patients, who previously failed to respond to other antidepressant medications, were randomly given the drug or a placebo. The drug shows potential for long-lasting results, too. “Nobody freaked out,” says James W. Dr.

Related:
Related:  understanding it all   -  important