My Firsthand Experience: How GMOs Cause Farmer Suicide. By Dr. 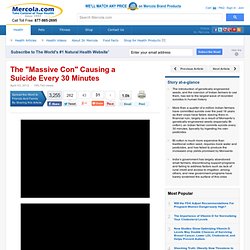 Mercola It's been called the "largest wave of recorded suicides in human historyi. " Indian farmers have been robbed of their livelihoods, causing them to take their own lives in despair.Over the past 16 years, it is estimated that more than a quarter of a million Indian farmers have committed suicide.Who is responsible for this tragedy?

The most obvious culprits are global corporations like Monsanto, Cargill and Syngenta and the genetically engineered seed they have forced upon farmers worldwide. None are hit harder than those in India, where socioeconomic and environmental factors have magnified the impact, making it almost impossible for these farmers to survive.In fact, genetically engineered seeds are so fundamental to the problem that it's been termed "GM Genocide. " I personally visited India when I met with Organic India. The science checklist applied: Solving DNA's double helix. Rosalind Franklin vs. Watson & Crick – Science History Rap Battle. Thanks for watching the video! 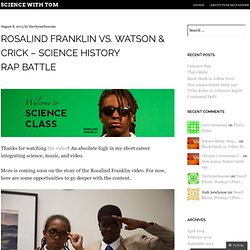 An absolute high in my short career integrating science, music, and video. DNA from the Beginning - An animated primer of 75 experiments that made modern genetics. Pinterest. Pinterest. Detective Punnett Square: connecting families by genetics. The Future of Genetically Modified Crops. Punnett Squares. Pinterest. Look at us now: The black and white twins as they turn seven.

Closer than ever… The million-to-one black and white twins Kian and Remee turn seven One is black and has big brown eyes. 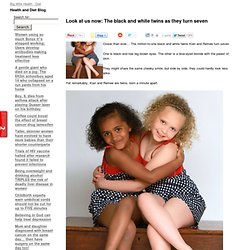 The other is a blue-eyed blonde with the palest of skin. They might share the same cheeky smile, but side by side, they could hardly look less alike. Pinterest. Playing With the Building Blocks of Life. Sixth, Seventh, and Eighth Grade Lesson Boosters for any ... Albinosy. Lean, Mean Information Machine: Using a Simple Model to Learn about Chromosomal DNA. Abstract. 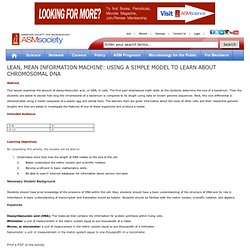 Physical Science Activities: Bungee Jumping with eggs! A ... The Party Wagon - Blog - TURKEY TIME. As Thanksgiving Day approaches, I wanted to share some fantastic ideas with you from Katherine Marie Photography. 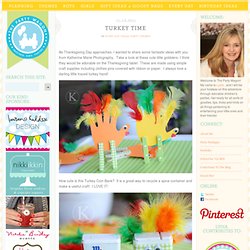 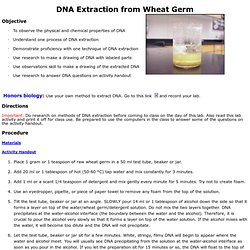 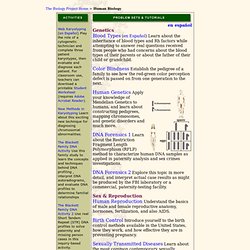 Click on the small thumbnail pictures below to magnify the flies. 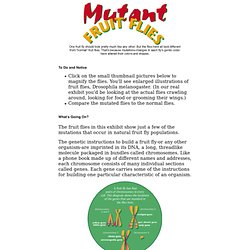 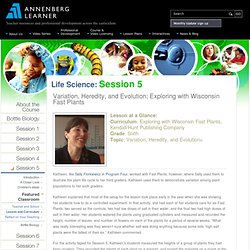 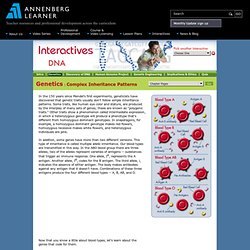 Some traits, like human eye color and stature, are produced by the interplay of many sets of genes; these are known as "polygenic traits. " Other traits show a phenomenon called intermediate expression, in which a heterozygous genotype will produce a phenotype that's different from homozygous dominant genotypes. In snapdragons, for example, a homozygous dominant genotype makes red flowers, homozygous recessive makes white flowers, and heterozygous individuals are pink. In addition, some genes have more than two different versions.

This type of inheritance is called multiple allelic inheritance. DNA . Intro. Rediscovering Biology - Case Studies: Designing Cancer Drugs. Although they are best known for their use in agriculture to increase yields and fight crop diseases, genetic modification techniques are used in many different areas of biological research, including medicine. In this case study, we'll follow the process of developing an edible vaccine for the hepatitis B virus and explore practical details of genetic engineering techniques. The current hepatitis B vaccine is a recombinant subunit produced in yeast. Subunit vaccines are viral proteins that elicit an immune response without viral genetic material. The current vaccine is effective, but cost-prohibitive for economically challenged areas. A better option that is more easily administered might be an edible vaccine from a plant genetically modified to express a hepatitis B protein.

People with blue eyes have common ancestor. The twisting tale of DNA - Judith Hauck. Deoxyribonucleic acid, or DNA, is a nucleic acid containing the genetic instructions used in the development and functioning of all known living organisms (with the exception of RNA viruses). Which contains the biological instructions that make each species unique, along with the instructions it contains, is passed from adult organisms to their offspring during reproduction. National Human Genome Research Institute began as the National Center for Human Genome Research (NCHGR), which was established in 1989 to carry out the role of the National Institutes of Health (NIH) in the International Human Genome Project (HGP). The HGP was developed in collaboration with the United States Department of Energy and begun in 1990 to map the human genome.

DNA: The book of you - Joe Hanson. Cold Spring Harbor Laboratory (CSHL) is a private, not-for-profit research and education institution at the forefront of molecular biology and genetics. Was an annus mirabilis for science. Here are five classic papers from Nature that describe and provide evidence for the double helix being the structure of DNA, and one from The Journal of Experimental Medicine that has been described as the "defining moment in nucleic acid research.

" is an incredible picture of unlinked DNA under the electron microscope. Acid (DNA) molecules are informational molecules encoding the genetic instructions used in the development and functioning of all known living organisms and many viruses. Along with RNA and proteins, DNA is one of the three major macromolecules that are essential for all known forms of life. How Mendel's pea plants helped us understand genetics - Hortensia Jiménez Díaz. Through the Wormhole with Morgan Freeman. Introduction to Genetics. Blank-face.jpg 590×639 pixels. Science, Genetics, Punnett Square. Sex Linked Traits. Codominance and incomplete dominance. Biology, Science, Genetics. Introduction to Genetics.