Neanderthal genome shows early human interbreeding, inbreeding. The most complete sequence to date of the Neanderthal genome, using DNA extracted from a woman's toe bone that dates back 50,000 years, reveals a long history of interbreeding among at least four different types of early humans living in Europe and Asia at that time, according to University of California, Berkeley, scientists. 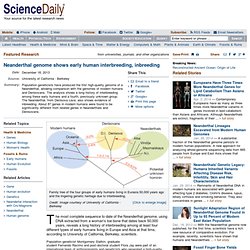 Population geneticist Montgomery Slatkin, graduate student Fernando Racimo and post-doctoral student Flora Jay were part of an international team of anthropologists and geneticists who generated a high-quality sequence of the Neanderthal genome and compared it with the genomes of modern humans and a recently recognized group of early humans called Denisovans. The comparison shows that Neanderthals and Denisovans are very closely related, and that their common ancestor split off from the ancestors of modern humans about 400,000 years ago.

Neanderthals and Denisovans split about 300,000 years ago. Sunlight adaptation region of Neanderthal genome found in up to 65 percent of modern East Asian population. Asia was settled in multiple waves of migration, DNA study suggests. An international team of researchers studying DNA patterns from modern and archaic humans has uncovered new clues about the movement and intermixing of populations more than 40,000 years ago in Asia. 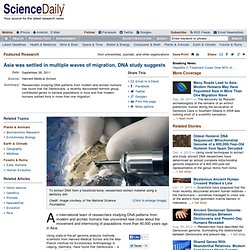 Using state-of-the-art genome analysis methods, scientists from Harvard Medical School and the Max Planck Institute for Evolutionary Anthropology in Leipzig, Germany, have found that Denisovans -- a recently identified group of archaic humans whose DNA was extracted last year from a finger bone excavated in Siberia -- contributed DNA not just to present-day New Guineans, but also to aboriginal Australian and Philippine populations. The study demonstrates that contrary to the findings of the largest previous genetic studies, modern humans settled Asia in more than one migration. According to David Reich, a professor of genetics at Harvard Medical School, "Denisova DNA is like a medical imaging dye that traces a person's blood vessels.

Genetic footprints. Ancient skeleton shows first Americans came from Asia. The first genome sequencing of the Ice Age skeletal remains of a 1-year-old boy has given scientists definitive proof that the first human settlers in North America were from Asia and not Europe, and that these people were the direct ancestors of modern Native Americans, according to research that includes a Texas A&M University professor. 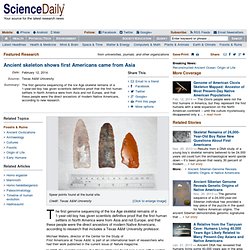 Michael Waters, director of the Center for the Study of First Americans at Texas A&M, is part of an international team of researchers who had their work published in the current issue of Nature magazine. In 1968, the skeletal remains of a Clovis child were found near a rock cliff in central Montana, along with more than 100 burial artifacts found with the boy such as spear points and antler tools. Ancient Siberian genome reveals genetic origins of Native Americans. The genome sequence of a 24,000-year-old Siberian individual has provided a key piece of the puzzle in the quest for Native American origins. 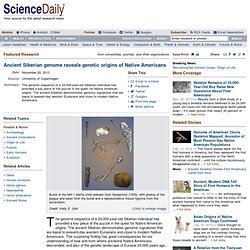 The ancient Siberian demonstrates genomic signatures that are basal to present-day western Eurasians and close to modern Native Americans. Genome of American Clovis skeleton mapped: Ancestor of most present-day Native American populations. They lived in America about 13,000 years ago where they hunted mammoth, mastodons and giant bison with big spears. 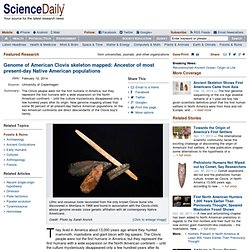 The Clovis people were not the first humans in America, but they represent the first humans with a wide expansion on the North American continent -- until the culture mysteriously disappeared only a few hundred years after its origin. Who the Clovis people were and which present day humans they are related to has been discussed intensely and the issue has a key role in the discussion about how the Americas were peopled. Today there exists only one human skeleton found in association with Clovis tools and at the same time it is among the oldest human skeletons in the Americas. 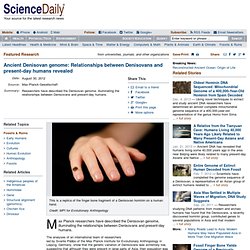 The analyses of an international team of researchers led by Svante Pääbo of the Max Planck Institute for Evolutionary Anthropology in Leipzig, Germany, show that the genetic variation of Denisovans was extremely low, suggesting that although they were present in large parts of Asia, their population was never large for long periods of time. In addition, a comprehensive list documents the genetic changes that set apart modern humans from their archaic relatives. Some of these changes concern genes that are associated with brain function or nervous system development.

In 2010 Svante Pääbo and his colleagues sequenced DNA that they isolated from a finger bone fragment discovered in the Denisova Cave in southern Siberia. Tibetan altitude gene came from extinct human species - life - 02 July 2014. Tibetans are comfortable at high altitudes where the air is thin. 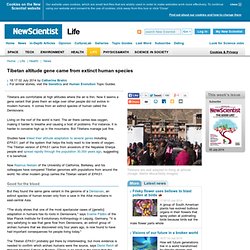 Now it seems a gene variant that gives them an edge over other people did not evolve in modern humans. Hundreds of Human Genes Still Evolving. A comprehensive scan of the human genome finds that hundreds of our genes have undergone positive natural selection during the past 10,000 years of human evolution. 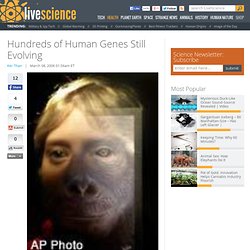 Genes are the instructions organisms use to make proteins. They are encoded in genetic material, usually DNA, and some come in different versions, called “alleles. " Positive natural selection occurs when one allele is favored over another due to changes in the environment. Researchers from the University of Chicago analyzed the genomes of 209 unrelated individuals from three distinct human populations: East Asians, Europeans and Yorubans from Nigeria.

Each population contained roughly 250 positively selected genes; however, most of the affected genes differed depending on the group. “This study addresses the question 'Are humans still evolving? ' Other studies have also reached the same conclusion. Links to history. Black Death Likely Altered European Genes. The Black Death of the 14th century may be written into the DNA of survivors' descendants, new research finds. 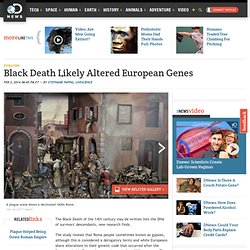 The study reveals that Roma people (sometimes known as gypsies, although this is considered a derogatory term) and white Europeans share alterations to their genetic code that occurred after the Roma settled in Europe from northwest India 1,000 years ago. The plague of the 1300s, which killed at least 75 million people, is a likely candidate for forcing this evolutionary change. "We show that there are some immune receptors that are clearly influenced by evolution in Europe and not in northwest India," said study leader Mihai Netea, a researcher in experimental internal medicine at Radboud University Nijmegen Medical Center in the Netherlands. 5 Intriguing Facts About the Roma "India did not have the medieval plague, as Europe had," Netea told Live Science. 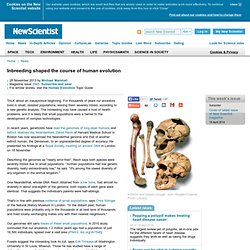 Worm Discovery Illuminates How Our Brains Might Have Evolved. Our earliest invertebrate ancestors did not have brains. Yet, over hundreds of millions of years, we and other vertebrates have developed amazingly complicated mental machinery. "It must have evolutionary roots somewhere, but where? " wrote Henry Gee, an editor at Nature, in an essay published in the journal's March 15 issue.

(Scientific American is part of Nature Publishing Group.) Does the African genome hold the secrets of a previously unknown species of hominid? Europe's Ancestors: Cro-Magnon 28,000 Years Old Had DNA Like Modern Humans. Some 40,000 years ago, Cro-Magnons -- the first people who had a skeleton that looked anatomically modern -- entered Europe, coming from Africa. Genetic archaeology finds parts of human genome more closely related to orangutans than chimps.

In a study published online in Genome Research, in coordination with the publication of the orangutan genome sequence, scientists have presented the surprising finding that although orangutans and humans are more distantly related, some regions of our genomes are more alike than those of our closest living relative, the chimpanzee. The fossil record helped to establish evolutionary relationships and estimate divergence times of the primate branch leading to humans, but not until the advent of genome sequencing technology has it been possible to learn more detail about speciation times, genetic and phenotypic divergence times, and the genetic variation present in common ancestor species. New Clues About Human Ancestry. RedOrbit Staff & Wire Reports – Your Universe Online For the first time, scientists have been able to trace human ancestry through the male line by sequencing the DNA of multiple entire Y chromosomes – and this so-called “Adam” lived during roughly the same time period as the female most recent common ancestor (MRCA), mitochondrial “Eve,” they have discovered.

Who is Mitochondrial Eve? When scientists announced the discovery of a common female ancestor to every living human, many people had trouble understanding how the scientists came to this conclusion. In reality, Mitochondrial Eve isn't the only ancestor we share, as some have claimed. Nor was she an isolated woman who somehow avoided genes from other people. Mitochondrial Eve and Adam Could Have Met Between 148 - 120 Thousand Years Ago. Oldest human genome dug up in Spain's pit of bones - life - 04 December 2013. Read full article Continue reading page |1|2. Blue-eyed Humans Have A Single, Common Ancestor. New research shows that people with blue eyes have a single, common ancestor. Ancient humans were mixing it up: Anatomically modern humans interbred with more archaic hominin forms while in Africa. It is now widely accepted that the species Homo sapiens originated in Africa and eventually spread throughout the world. Retired lecturer is 'grandfather of everyone in Britain' after DNA test reveals he is direct descendant of world's first woman.

Humans originated in Africa. But what route did they take as they began to disperse around the world 60,000 years ago?