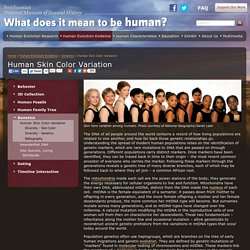 Photo courtesy of National Geographic/Sarah Leen The DNA of all people around the world contains a record of how living populations are related to one another, and how far back those genetic relationships go. Understanding the spread of modern human populations relies on the identification of genetic markers, which are rare mutations to DNA that are passed on through generations. Different populations carry distinct markers. Once markers have been identified, they can be traced back in time to their origin – the most recent common ancestor of everyone who carries the marker. The mitochondria inside each cell are the power stations of the body; they generate the energy necessary for cellular organisms to live and function.

Population genetics often use haplogroups, which are branches on the tree of early human migrations and genetic evolution. What Science Says About Race and Genetics. A longstanding orthodoxy among social scientists holds that human races are a social construct and have no biological basis. 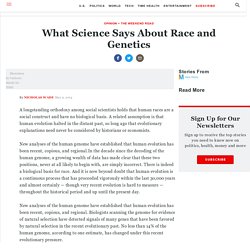 A related assumption is that human evolution halted in the distant past, so long ago that evolutionary explanations need never be considered by historians or economists. New analyses of the human genome have established that human evolution has been recent, copious, and regional.In the decade since the decoding of the human genome, a growing wealth of data has made clear that these two positions, never at all likely to begin with, are simply incorrect. There is indeed a biological basis for race.

And it is now beyond doubt that human evolution is a continuous process that has proceeded vigorously within the last 30,000 years and almost certainly — though very recent evolution is hard to measure — throughout the historical period and up until the present day. Racism and discrimination are wrong as a matter of principle, not of science. Genetics and Social Behavior. Females lacking second X-chromosome may have started life 'male' Turner Syndrome, a condition in which women have only one X chromosome instead of two, may be caused by a missing Y chromosome instead of a missing X as previously thought. 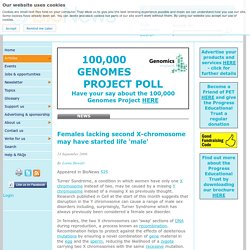 Research published in Cell at the start of this month suggests that disruption in the Y chromosome can cause a range of male sex disorders including, surprisingly, Turner Syndrome which has always previously been considered a female sex disorder. In females, the two X chromosomes can 'swap' sections of DNA during reproduction, a process known as recombination. Recombination helps to protect against the effects of deleterious mutations by ensuring a novel combination of gene material in the egg and the sperm, reducing the likelihood of a zygote carrying two X chromosomes with the same recessive mutation.

However, the X and Y chromosomes are fundamentally different to each other and so cannot pair up and swap genetic material in this way. Intro. Practice Genetics Problems The following links will take you to pages containing genetics practice problems. 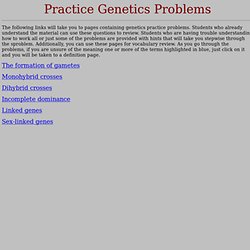 Students who already understand the material can use these questions to review. Students who are having trouble understanding how to work all or just some of the problems are provided with hints that will take you stepwise through the sproblem. Additionally, you can use these pages for vocabulary review. As you go through the problems, if you are unsure of the meaning one or more of the terms highlighted in blue, just click on it and you will be taken to a definition page. Genetic Linkage. 1. 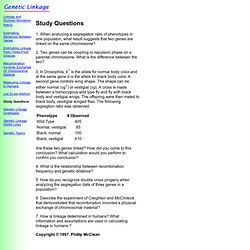 When analyzing a segregation ratio of phenotypes in one populaton, what result suggests that two genes are linked on the same chromosome? 2. Two genes can be coupling or repulsion phase on a parental chromosome. Virtual Courseware for Inquiry-based Science Education. VCISE is a collection of interactive, online simulations designed to enhance traditional middle and high school science curricula by providing supplements to experimental laboratory or field work. 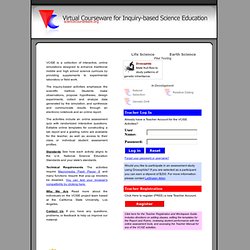 The inquiry-based activities emphasize the scientific method. Students make observations, propose hypotheses, design experiments, collect and analyze data generated by the simulation, and synthesize and communicate results through an electronic notebook and an online report. The activities include an online assessment quiz with randomized interactive questions.

Editable online templates for constructing a lab report and a grading rubric are available for the teacher, as well as access to their class or individual student assessment profiles. Standards See how each activity aligns to the U.S. Technical Requirements The activities require Macromedia Flash Player 8 and many functions require that pop-up blockers be disabled. Fly Lab. - Virtual Fly Lab If your knowledge of Genetics is minimal you may want to take a look at the Genetics info in BIO 113 before beginning the Virtual Fly Lab. BIO 114 Virtual Fly: To begin your experiment, you must first select the phenotypes for the flies that will be mated. In addition to wild-type flies, there are thousands of different mutations of the common fruit fly, Drosophila melanogaster. These mutations create phenotypic changes in; body color, antennae shape, eye color, eye shape, wing size, wing shape, wing vein structure, wing angle and many other features.

For the purposes of our simulation, genetic inheritance in our virtual lab will follow Mendelian principles of complete dominance. VIRTUAL GENETICS LAB. Edheads - Interactive animations.