Catching Up With Coddling part eleven: The special problem of ‘bias response teams’ How the United Nations Whitewashes China’s Crushing of Free Speech. The United Nation’s Universal Declaration of Human Rights vows to protect freedom of speech for all individuals. 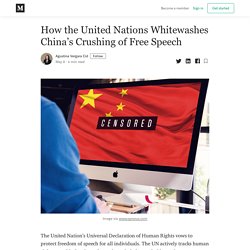 The UN actively tracks human rights, notably freedom of speech, and pledges to hold member-states accountable for violations of such rights. But the truth is that the UN is undermining freedom of speech. Free Speech and Its Present Crisis: In today’s America, the right to express one’s opinion is threatened by activists and authorities alike. In defence of Jo Brand. What a bunch of big babies the right can sometimes be. 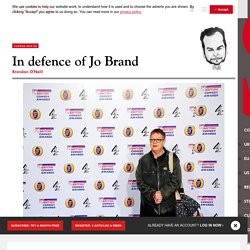 These people spend oodles of time mocking lefty snowflakes and touchy students for taking offence at every off-colour joke or un-PC point of view. And yet it turns out they’re just as susceptible as any moaning millennial to having a fit of the Victorian vapours when someone says something they find offensive. Exhibit A: the unhinged fury over Jo Brand’s joke about battery acid. Seriously, over the past 24 hours right-wingers have given the PC left a run for its money on the boo-hoo offence-taking front. You Can't Make This Up: A Speech Code that Investigates Students for Discussing the Freedom of Speech. Campus Week: The Emperor’s Woke Clothes. The overwhelming majority of Americans oppose political correctness. 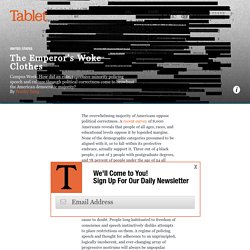 A recent survey of 8,000 Americans reveals that people of all ages, races, and educational levels oppose it by lopsided margins. None of the demographic categories presumed to be aligned with it, or to fall within its protective embrace, actually support it. Three out of 4 black people, 2 out of 3 people with postgraduate degrees, and 78 percent of people under the age of 24 all regard political correctness as a problem. While 79 percent of white people oppose political correctness, it is Asians (82 percent), Hispanics (87 percent), and American Indians (88 percent) who are most likely to be resistant to it. Greg Lukianoff on 'The Coddling of the American Mind' I spoke to Lukianoff about what’s changed since the publication of his Atlantic cover story, how parenting contributes to students’ expectations for their education, and the increasingly blurred lines between engaging with ideas and endorsing them. 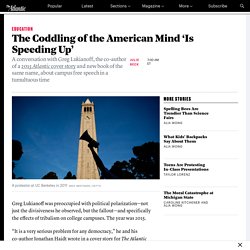 An edited and condensed transcript of our conversation is below. Julie Beck: When you first published “The Coddling of the American Mind” as a magazine piece, did you get different reactions from students, from professors, and from the lay public not currently enrolled or working at universities? Greg Lukianoff: Definitely. Since we were talking about topics that are very dearly held by some students, trigger warnings in particular. Trigger warnings produced the strongest reaction in the entire article. Instead what we got, to our surprise and delight, was mostly a really good conversation. The protests were usually on racial-justice issues.

The Evils of Cultural Appropriation. In 1961, the anthropologist William Rowe documented a curious feature of Indian village life. 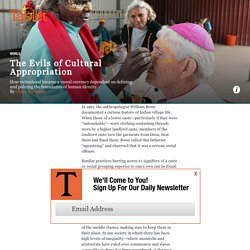 When those of a lower caste—particularly if they were “untouchable”—wore clothing containing threads worn by a higher landlord caste, members of the landlord caste tore the garments from them, beat them and fined them. Rowe called this behavior “upcasteing” and observed that it was a serious social offense. Similar practices barring access to signifiers of a caste or social grouping superior to one’s own can be found throughout the historical record. Untitled. Nationalreview. 2017 7 7 Utah Ag Gag MSJ Opinion. Professors Must Now Fear Intimidation From Both Sides. The string of recent cases in which professors have been fired, sanctioned, or placed on leave by their universities in response to public outrage generated by right-wing media sites is an alarming turn of events for the academy and for the country. 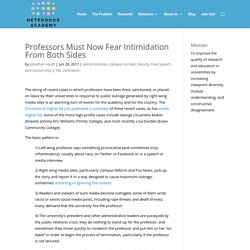 The Chronicle of Higher Ed just published a summary of these recent cases, as has Inside Higher Ed. Some of the more high-profile cases include George Ciccariello-Maher (Drexel), Johnny Eric Williams (Trinity College), and most recently Lisa Durden (Essex Community College). The basic pattern is: 1) Left-wing professor says something provocative (and sometimes truly inflammatory), usually about race, on Twitter or Facebook or in a speech or media interview. 2) Right wing media sites, particularly Campus Reform and Fox News, pick up the story and report it in a way designed to cause maximum outrage, sometimes distorting or ignoring the context. BREAKING: Laura Kipnis’ second ‘Title IX inquisition’ 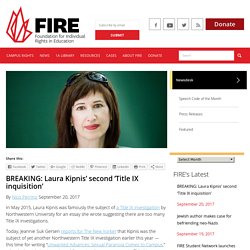 Today, Jeannie Suk Gersen reports for The New Yorker that Kipnis was the subject of yet another Northwestern Title IX investigation earlier this year — this time for writing “Unwanted Advances: Sexual Paranoia Comes to Campus,” a book about being investigated for saying there are too many Title IX investigations. The month-long investigation was sparked by complaints about “Unwanted Advances” from four Northwestern faculty members and six graduate students. As with her first investigation, Kipnis was ultimately found not responsible for violating university policy.

We don’t need the state to police hate. The ACLU is retreating from the fight for freedom. It’s official. 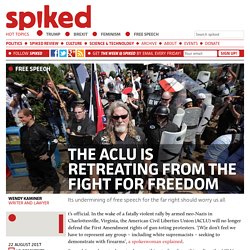 In the wake of a fatally violent rally by armed neo-Nazis in Charlottesville, Virginia, the American Civil Liberties Union (ACLU) will no longer defend the First Amendment rights of gun-toting protesters. ‘[W]e don’t feel we have to represent any group – including white supremacists – seeking to demonstrate with firearms’, a spokeswoman explained. Second Amendment advocates have nothing to fear from this policy; the ACLU has never championed individual gun rights, which have flourished without its help. What’s caught in the wide net cast by hate speech policies? By Sarah McLaughlin August 22, 2017 Facebook has a right — and, according to many users, a responsibility — to police its content to protect users from harassment or threats. 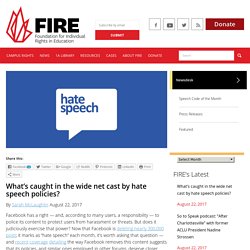 But does it judiciously exercise that power? Now that Facebook is deleting nearly 300,000 posts it marks as “hate speech” each month, it’s worth asking that question — and recent coverage detailing the way Facebook removes this content suggests that its policies, and similar ones employed in other forums, deserve closer scrutiny. In June, ProPublica released a “trove of internal documents” revealing the ways in which Facebook trains its content reviewers to censor speech. The Deep Theory behind Stifling Speech. By Stephen Hicks July 22, 2017. 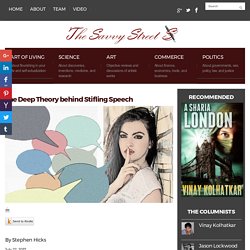 On Finland, the United States, and the freedom of information and of the press. By Floyd Abrams By Floyd Abrams The Volokh Conspiracy Opinion Opinion A column or article in the Opinions section (in print, this is known as the Editorial Pages). May 22 at 8:03 AM.