Some Lessons From the Russian Revolution. For a revolutionary, the world is worthless and merits annihilation. 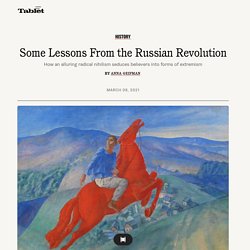 Someone who thinks so must loathe life. “There is no greater joy, there is no better music than a crushing sound of smashed bones and lives,” a Bolshevik poet echoed in a hymn to obliteration. The Nazis “were destroyers,” argued psychologist Erich Fromm. “They hated not only their enemies, they hated life itself.” A zeal for annihilation is at the core of extremism, no matter what the orientation. Nihilists at the turn of the 20th century in Russia held sanity, love, and kindness to be archaic and banal. Islam and the Left - Two Sides of the Same Coin - Daniel Greenfield / Sultan Knish articles. On the surface of it they seem to have very little in common. 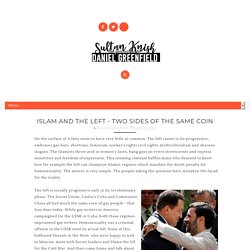 The left claims to be progressive, embraces gay bars, abortions, feminism, worker's rights civil rights, multiculturalism and obscene slogans. The Islamists throw acid in women's faces, hang gays on every streetcorner and repress minorities and freedom of expression. This seeming contrast baffles many who demand to know how for example the left can champion Islamic regimes which mandate the death penalty for homosexuality.

The answer is very simple. Unqualified Reservations by Mencius Moldbug. In the first three chapters, dear open-minded progressive, we’ve tried to build up some tools that will help you evaluate the disturbing proposition we’re about to present. 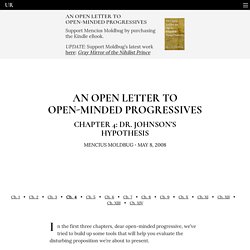 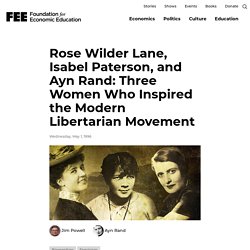 Powell is editor of Laissez-Faire Books and a Senior Fellow at the Cato Institute. He has written for the New York Times, the Wall Street Journal, Barron’s, American Heritage, and more than three dozen other publications. Copyright © 1996 by Jim Powell. Liberty was in full retreat in the early 1940s. Tyrants oppressed or threatened people on every continent. Established American authors who defended liberty were a dying breed. Amidst the worst of times, three bold women banished fear. Economics as the Study of Peaceful Human Cooperation and Progress. Editor’s Note: Below is the keynote address delivered by Professor Horwitz on December 17 in Athens, Greece at the Center for Liberal Studies Annual Prometheus Awards Dinner. 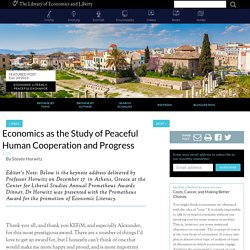 Dr Horwitz was presented with the Prometheus Award for the promotion of Economic Literacy. Armed and Dangerous. Americans have never really understood ideological warfare. 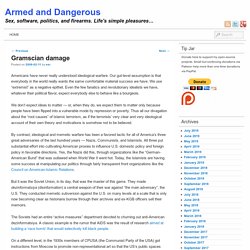 Our gut-level assumption is that everybody in the world really wants the same comfortable material success we have. We use “extremist” as a negative epithet. Even the few fanatics and revolutionary idealists we have, whatever their political flavor, expect everybody else to behave like a bourgeois. We don’t expect ideas to matter — or, when they do, we expect them to matter only because people have been flipped into a vulnerable mode by repression or poverty. Conversation with Glenn Beck [transcript] – Stephen Hicks, Ph.D. My discussion with Glenn Beck ranged over capitalism and socialism, the ethics needed for a free society, Greek virtues, intolerance and indoctrination in education, Ayn Rand’s egoism and her view of charity, whether a meaningful life requires transcending failure, the differences between Antifa and Nazi Brownshirts, whether the National Socialist really were socialist, postmodernism, whether Nietzsche’s “God is dead” is nihilistic or liberating, whether World War I was the cultural breaking point, Dadaism, Sigmund Freud, Michel Foucault, Jacques Derrida, whether history repeats itself, how to return to constructive dialogue, should we be optimistic or pessimistic, and more. 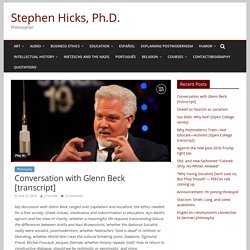 The audio-only link is here, and the video versions are at YouTube. Here is the transcript: Glenn Beck: Let me start with questions that I don’t think the average American can give you a good answer on, three of them, alright? What’s socialism? Beck: Does pure socialism go as far as Anthem or We the Living? Tribune Content Agency (February 6, 2019) Noah Rothman, a brilliant young writer and editor at Commentary Magazine, has just published his first book, and it’s about nonsense. 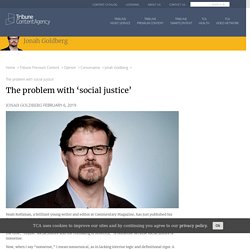 Let me be clear: The book isn’t nonsense. It’s crisp, insightful and passionate. How Facts Get Chosen and Minds Get Changed. Enlightenment Wars: Some Reflections on 'Enlightenment Now,' One Year Later. The Enlightenment, Racist? No, Equality Was Key. Some of its proponents were, but the solution was built in Jamelle Bouie, the chief political correspondent for Slate, recently penned an essay suggesting that the Enlightenment was racist — though the real point seemed to be that liking the Enlightenment too much is kind of racist. 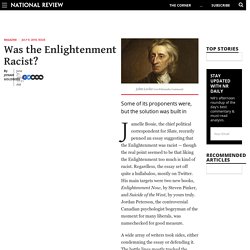 Regardless, the essay set off quite a hullabaloo, mostly on Twitter. His main targets were two new books, Enlightenment Now, by Steven Pinker, and Suicide of the West, by yours truly. Jordan Peterson, the controversial Canadian psychologist bogeyman of the moment for many liberals, was namechecked for good measure. A wide array of writers took sides, either condemning the essay or defending it. Before I go on, let me disappoint many of my defenders and state here that I think Douthat is mostly right. Camille Paglia: It’s Time for a New Map of the Gender World.

I discovered Camille Paglia’s work when I was pursuing my undergraduate arts education at The University of Adelaide, South Australia, in the early 2000s. 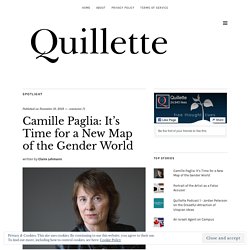 I was deeply disillusioned with the courses in my arts degree and their monomaniacal focus on social constructionism, and was looking for criticism of Michel Foucault on the internet. An Evening with Michael Crichton: Events: The Independent Institute. An Evening with Michael CrichtonNovember 15, 2005 Contents. The grossly misunderstood 'banality of evil' theory. Having spent five years delving into the writings of the political thinker Hannah Arendt, while researching my 2015 documentary “Vita Activa: The Spirit of Hannah Arendt,” I take the liberty of stating that Israeli sociologist Eva Illouz, in her article “Rethinking the ‘banality of evil’ theory” (Haaretz, August 5), displays an unfortunate miscomprehension of that fraught term.

We shall begin with factual errors. Arendt never considered the Nazi evil or the Holocaust as an expression of “an undiagnosed but latent disease of regular, ordinary human beings,” as Illouz wrote. Don’t Tread on Anyone — Keith Knight’s interview with me – Stephen Hicks, Ph.D. Don’t Tread on Anyone — Keith Knight’s interview with me – Stephen Hicks, Ph.D. Questioning Truth, Reality and the Role of Science. Why Jordan B Peterson Appeals to Me (And I Am on the Left) - Quillette. As a writer who identifies as a leftist, and who sympathizes with Noam Chomsky’s anarcho-syndicalism on a root personal level, I should theoretically be joining the chorus of critics who have decided that Jordan Peterson is a reactionary. Human Rights are Property Rights - Foundation for Economic Education - Working for a free and prosperous world. Teaching kids philosophy makes them smarter in math and English — Quartz. “When fascism comes to America, it will be wrapped in the flag and carrying a cross,” goes the aphorism commonly attributed (perhaps mistakenly) to Sinclair Lewis.

The election of soon-to-be president Donald Trump suggests the prediction may turn out to have been only half-true. As Trump opponents nervously await his inauguration, many are wondering about how to discern the potential signposts of American fascism in the making. What legislative markers should we look for as the government trundles toward authoritarianism, dragging the world’s foremost attempt at democracy into at least four years of retrograde policy and pronouncement? With 2016 drawing mercifully to a close, it’s worth looking towards eastern Europe for a sense of what Washington, and those who would unravel liberal (as opposed to illiberal) democracy in America, may have in store. But Russia’s post-Soviet model of autocracy seems to appeal to the president-elect. Nypost. The Independent.

IT HAS BEEN more than 10 years since the disaster at Hillsborough football stadium. Ninety-six football fans were crushed to death that afternoon; yet the final victim, 17-year-old Tony Bland, didn't actually die there - at least, not technically. He was trampled so badly that his chest caved in and his lungs collapsed. List of fallacies. Bertrand Russell: The Value of Philosophy. Chapter XV of The Problems of Philosophy. The Future of Feminism: An Interview with Christina Hoff Sommers. Christina Hoff Sommers Over the last decade or two, many women in the United States have distanced themselves from the feminist movement. It appears that a growing number of them associate feminism with anger and hostile rhetoric and have therefore concluded that they are not really feminists. This was reflected in a recent Time/CNN poll which showed that although 57 percent of the women responding felt there was a need for a strong women's movement, a full 63 percent said they didn't consider themselves feminists.

This fact is not surprising to Christina Hoff Sommers, author of the controversial polemic Who Stole Feminism: How Women Have Betrayed Women. Sommers contends that feminism has taken a wrong turn in recent years. Christina Hoff Sommers is a resident scholar at the American Enterprise Institute and former professor of philosophy at Clark University in Massachusetts. Thomas Aquinas's Proof of God. Liberalism’s Beleaguered Victory. About 25 years ago, the collapse of communism in the Soviet Union and Eastern Europe revived a line of speculation that had lain dormant for eighty years: that human history was fundamentally progressive in nature, and that reasonable and humane liberal democratic governance, capable of promoting peace and prosperity, was destined to be globally triumphant.

Greek to Me. Plato and Aristotle were famously different in their temperaments and political thought. Plato was the radical revolutionary; channeling Socrates, his Republic presented a template of an ideal constitution. The Law, by Frederic Bastiat. The Book and AuthorThe TranslationLife Is a Gift from GodWhat Is Law? A Just and Enduring GovernmentThe Complete Perversion of the LawA Fatal Tendency of MankindProperty and PlunderVictims of Lawful PlunderThe Results of Legal PlunderThe Fate of Non-ConformistsWho Shall Judge?

Neo-neocon » Blog Archive » Disasters and “the forgetting” [This is a slightly edited version of a piece that I wrote very early in my blogging career about the tsunami of January 2005. It occurred to me to reprint it in light of the horrific earthquake in China.] We hardly hear about the tsunami anymore, although for a while it dominated the news. The tsunami was videotaped in a staggering variety of manifestations: from the tall towering waves of Japanese art, to rolling swells that almost resembled a normal tide coming in—except for the fact that this particular tide just kept coming and coming and coming. We viewed forlorn beaches where villages had once stood, and saw keening mourners whose anguish was almost unbearable to watch even on the small screen.