Learn More at Space.com. From Satellites to Stars, NASA information, Astronomy, the Sun and the Planets, we have your information here. 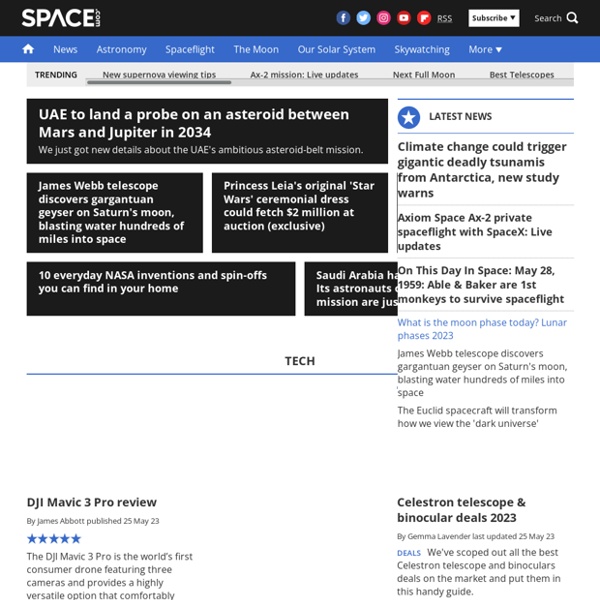 Planets Planets: The planet count in our solar system has gone as high as 15 before new discoveries prompted a fine tuning of the definition of a planet. The most recent change was in 2006 when scientists reclassified Pluto as a new kind of object - a dwarf planet. Dwarf Planets:

If the Moon Were Only 1 Pixel - A tediously accurate map of the solar system Mercury Venus Earth You Are Here Moon Mars 50th Anniversary of Canada in Space 9/24/2012 to 9/30/2012 May 23, 1963: Canada partners with NASA on ionospheric studies Following the success of Alouette, Canada partners with NASA through the International Satellites for Ionospheric Studies (ISIS) program.

The Human Body: Sites, Activities & Projects Human Body Picturing the Body Learn about common techniques for peering inside the body in order to diagnose disease and injury. Exploring Hair Scientific knowledge and a few chemical concoctions can get you through a Bad Hair Day. Exploratopia Video: NASA's New Upper Stage J-2X Engine Passes Major Test NASA conducted a successful 500-second test firing of the J-2X rocket engine on Wednesday, Nov. 9, marking another important step in development of an upper stage for the heavy-lift Space Launch System (SLS). SLS will carry the Orion spacecraft, its crew, cargo, equipment and science experiments to destinations in deep space. SLS will be safe, affordable and sustainable to continue America's journey of discovery from the unique vantage point of space. "The J-2X engine is critical to the development of the Space Launch System," Dan Dumbacher, NASA's deputy associate administrator for exploration systems development, said after the test at NASA's Stennis Space Center in Mississippi. "Today's test means NASA is moving closer to developing the rocket it needs if humans are to explore beyond low-Earth orbit."

Your Age on Other Worlds Want to melt those years away? Travel to an outer planet! <div class="js-required"><hr> This Page requires a Javascript capable browser <hr></div> Fill in your birthdate below in the space indicated. (Note you must enter the year as a 4-digit number!) Comet 'brighter than the moon' will fly-by the Earth in 2013 By Eddie Wrenn Published: 08:45 GMT, 27 September 2012 | Updated: 13:28 GMT, 27 September 2012 They are one of the most spectacular views a human could hope to see - and next year a comet which could outshine the moon is due to fly by the Earth. Comet ISON is visiting the inner solar system and is set to put on spectacular views for the Northern Hemisphere across November and December as it heads towards the sun. It may prove to be brighter than any comet of the last century - visible even in broad daylight - and this may end up being its one and only trip to the solar system, as its trajectory may see it plunge into the sun in a fiery death.