Twitter. Dropout Nation » Beyond Ferguson: Tackle School Discipline. To say that I am indignant about yesterday’s ruling by a St. 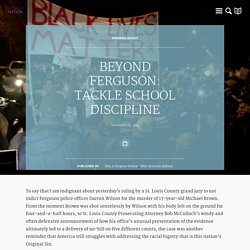 Louis County grand jury to not indict Ferguson police officer Darren Wilson for the murder of 17-year-old Michael Brown. From the moment Brown was shot senselessly by Wilson with his body left on the ground for four-and-a-half hours, to St. StraightTalk. _christopher_ers_res - Powered by Google Docs. The Experiment. By Katie Bacon '93 In July 2003, Yutaka Tamura ’94 stopped by a two-story vacant bank in a strip mall in East Boston. 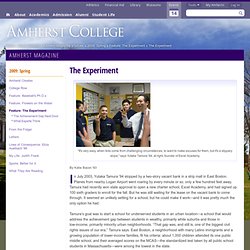 Planes from nearby Logan Airport went roaring by every minute or so, only a few hundred feet away. Tamura had recently won state approval to open a new charter school, Excel Academy, and had signed up 100 sixth graders to enroll for the fall. But he was still waiting for the lease on the vacant bank to come through. It seemed an unlikely setting for a school, but he could make it work—and it was pretty much the only option he had. Tamura’s goal was to start a school for underserved students in an urban location—a school that would address the achievement gap between students in wealthy, primarily white suburbs and those in low-income, primarily minority urban neighborhoods.

Just three years before, Tamura had been a businessman, poised to enter Harvard Business School. In February 2003, the Massachusetts Department of Education approved Excel’s charter. Many Graduates Delay Job Searches. British academics launch £18,000 college in London. 5 June 2011Last updated at 17:28 The 14 professors behind the project include evolutionary biologist Richard Dawkins A private college in England aiming to rival Oxford and Cambridge is being launched by leading academics. The New College of the Humanities says it will teach "gifted" undergraduates and prepare them for degrees from the University of London.

The privately-owned London-based college will open in September 2012 and is planning to charge fees of £18,000. The 14 professors involved include biologist Richard Dawkins and historian Sir David Cannadine. Professor Dawkins is an emeritus fellow of New College, Oxford, as well as being the author of The God Delusion, and Sir David is a professor at Princeton University in the United States. Teaching for America. Spring 2010. 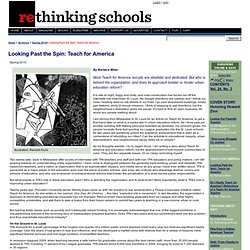 NOT Waiting for Superman - Supersized dollars drive "Waiting for Superman" agenda. « Read other entries… » by Barbara Miner Michael Duffy This article, written expressly for NOTwaitingforsuperman.org, explores the money behind the movie, its promoters, and those who will benefit from the movie. 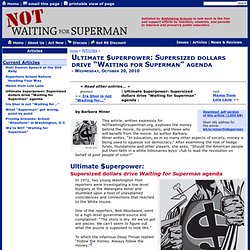 As author Barbara Miner writes, “In education, as in so many other aspects of society, money is being used to squeeze out democracy.” Teachers hostage to 'success' The e-mail box runneth over with bad tidings. 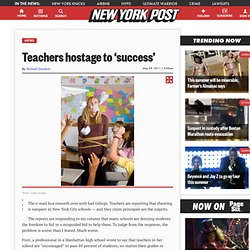 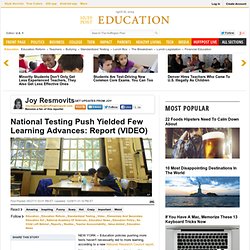 "We went ahead, implementing this incredibly expensive and elaborate strategy for changing the education system without creating enough ways to test whether what we are doing is useful or not," said Dan Ariely, a professor of behavioral economics at Duke University and member of the committee that produced the report. Heavily testing students and relying on their scores in order to hold schools -- and in some cases teachers -- accountable has become the norm in education policy. The No Child Left Behind Act, the largest piece of education legislation on the federal level, for example, uses performance on math and reading exams to gauge whether schools are failing or succeeding -- and which schools are closed or phased out.

The tests educators rely on are often too narrow to measure student progress, according to the study. The blackout at Stuyvesant and Bronx Science: Students of color have disappeared. Warga/News Stuyvesant High School in Lower Manhattan, one of the schools were the minority population is plummeting. 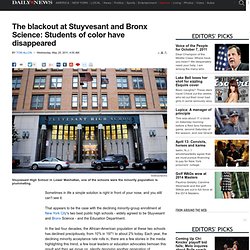 Sometimes in life a simple solution is right in front of your nose, and you still can't see it. That appears to be the case with the declining minority-group enrollment at New York City's two best public high schools - widely agreed to be Stuyvesant and Bronx Science - and the Education Department. Brooklyn Premiere: “The Inconvenient Truth Behind Waiting For Superman” Democrats for Education Reform. On the other side of the divide is a group of progressive policy experts and educators who published a manifesto during campaign season called A Broader, Bolder Approach to Education. 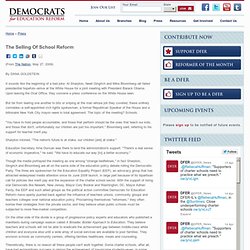 They believe teachers and schools will not be able to eradicate the achievement gap between middle-class white children and everyone else until a wide array of social services are available to poor families. They envision schools as community centers, offering families healthcare, meals and counseling. Theoretically, there is no reason all these people can't work together. 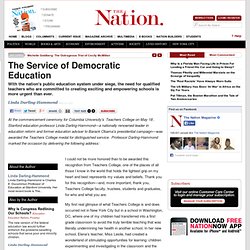 Professor Darling-Hammond marked the occasion by delivering the following address: About the Author. The Coming Paradigm Shift in Education Reform - Education. If you hang out with people in the education world long enough you'll quickly find that bringing up the connection between poverty and poor student achievement can start a heated debate. 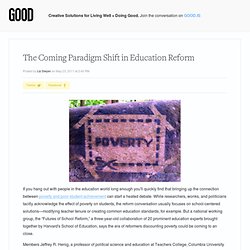 While researchers, wonks, and politicians tacitly acknowledge the effect of poverty on students, the reform conversation usually focuses on school-centered solutions—modifying teacher tenure or creating common education standards, for example. But a national working group, the “Futures of School Reform,” a three-year-old collaboration of 20 prominent education experts brought together by Harvard's School of Education, says the era of reformers discounting poverty could be coming to an close. Members Jeffrey R. Henig, a professor of political science and education at Teachers College, Columbia University and S. And, they say, we will in fact attend to those nonschool factors, Beware of School "Reformers" December 29, 2008. Stray Dogs: Getting Real About Making Schools Better.