Iceland Was Right, We Were Wrong: The IMF. VANCOUVER (Silver Gold Bull) -- For approximately three years, our governments, the banking cabal, and the Corporate Media have assured us that they knew the appropriate approach for fixing the economies that they had previously crippled with their own mismanagement. 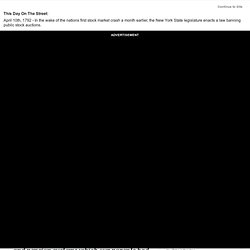 We were told that the key was to stomp on the Little People with "austerity" in order to continue making full interest payments to the Bond Parasites -- at any/all costs. Following three years of this continuous, uninterrupted failure, Greece has already defaulted on 75% of its debts, and its economy is totally destroyed. The UK, Spain and Italy are all plummeting downward in suicide-spirals, where the more austerity these sadistic governments inflict upon their own people the worse their debt/deficit problems get. Ireland and Portugal are nearly in the same position. What was Iceland's approach? The Icelandic Revolution. 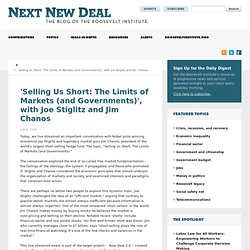 The topic, "Selling Us Short: The Limits of Markets (and Governments). " The conversation explored the end of so-called free market fundamentalism - the failings of the ideology, the system it propagated, and those who promoted it. Stiglitz and Chanos considered the economic principles that should underpin the organization of markets and society and examined interests and paradigms that constrain bold action. There are perhaps no better two people to explore this dynamic topic.

Joe Stiglitz challenged the idea of an "efficient market," arguing that contrary to popular belief, markets are almost always inefficient because information is almost always imperfect. Mandelbrot (Chaos Theory) Taleb (Black Swan) on markets. Nassim Taleb, PART 1. THE BLACK SWAN,..... The "Fragility" Crisis has Just Begun, PART 1. David Stockman on Crony Capitalism. Is Banking Bad? The corollary question, with Mitt Romney’s business career under attack even by staunch Republicans, is this: Is it unethical to make millions in private equity? 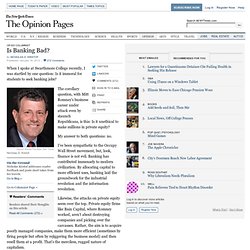 My answer to both questions: no. I’ve been sympathetic to the Occupy Wall Street movement, but, look, finance is not evil. Banking has contributed immensely to modern civilization. By allocating capital to more efficient uses, banking laid the groundwork for the industrial revolution and the information revolution.

Likewise, the attacks on private equity seem over the top. Liberals should also be wary of self-selecting out of certain occupations. Now for my caveats. When young people go into finance, I hope that they’ll show judgment, balance and principles instead of their elders’ penchant for greed and rigging the system. A Pew Research Center poll in December found that only 50 percent of Americans reacted positively to the term “capitalism,” while 40 percent reacted negatively.

Breaking Up Banks Is Easy When They Aren’t Failing. If we decide to break up the big banks, can we actually do it? 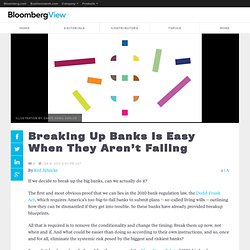 The first and most obvious proof that we can lies in the 2010 bank-regulation law, the Dodd-Frank Act, which requires America’s too-big-to-fail banks to submit plans -- so-called living wills -- outlining how they can be dismantled if they get into trouble. So these banks have already provided breakup blueprints. All that is required is to remove the conditionality and change the timing: Break them up now, not when and if. And what could be easier than doing so according to their own instructions, and so, once and for all, eliminate the systemic risk posed by the biggest and riskiest banks? Second, it has been done before. JPMorgan to Block Shareholder Vote on Bank Break-Up. A federation of U.S. labor unions is looking to force JPMorgan Chase's board to consider breaking up the company after the disastrous "London Whale" affair, but the bank is trying to ensure that its shareholders do not get to vote on the union's proposal. 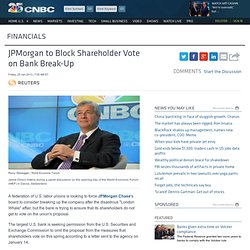 The largest U.S. bank is seeking permission from the U.S. Securities and Exchange Commission to omit the proposal from the measures that shareholders vote on this spring,according to a letter sent to the agency on January 14. The proposal, from the AFL-CIO's Reserve Fund, a union fund that owns JPMorgan shares, calls on bank directors to form a committee that would explore "extraordinary transactions that could enhance stockholder value," including breaking off one or more of the company's businesses. The panel should hire third-party advisers and make a report to shareholders 120 days after this spring's annual shareholder meeting, according to the proposal. Spokespersons for JPMorgan and the SEC declined to comment on the proposal. Dennis Kucinich on The NEED Act. The NEED Act. The Ascent of Money: A Financial History of The World by Niall Ferguson Epsd. 1-5 (Full Documentary)