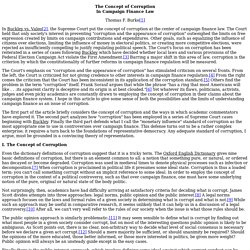 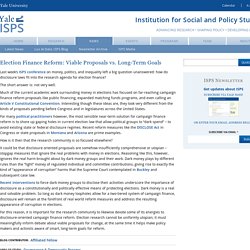 The short answer is: not very well. Much of the current academic work surrounding money in elections has focused on far-reaching campaign finance reform proposals like public financing, expanded matching funds programs, and even calling an Article V Constitutional Convention. Interesting though these ideas are, they look very different from the kinds of proposals pending before Congress and in legislatures across the United States. For many political practitioners however, the most sensible near-term solution for campaign finance reform is to shore up gaping holes in current election law that allow political groups to “dark spend” – to avoid existing state or federal disclosure regimes. Campaign Finance "Reform" Proposals: A First Amendment Analysis. In the wake of recent reports of questionable campaign finance practices have come ever more draconian proposals to “reform” the campaign finance system. 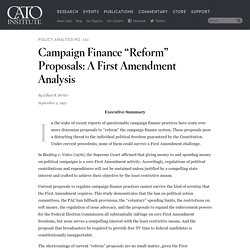 Those proposals pose a disturbing threat to the individual political freedom guaranteed by the Constitution. Under current precedents, none of them could survive a First Amendment challenge. In Buckley v. Valeo (1976), the Supreme Court affirmed that giving money to and spending money on political campaigns is a core First Amendment activity. Accordingly, regulations of political contributions and expenditures will not be sustained unless justified by a compelling state interest and crafted to achieve their objective by the least restrictive means. Transparency Is Key to Campaign Finance Reform. BillMoyers.com is proud to collaborate with EveryVoice on a series of op-eds featuring ideas from a variety of viewpoints for making our democracy one that is truly of, by and for the people. 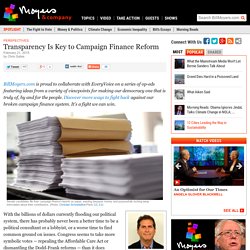 Discover more ways to fight back against our broken campaign finance system. It’s a fight we can win. Senate candidates file their campaign finance reports on paper, wasting taxpayer money and purposefully locking away information about their contributors. (Photo: Christian Schnettelker/Flickr CC 2.0) Chris Gates Sunlight Foundation With the billions of dollars currently flooding our political system, there has probably never been a better time to be a political consultant or a lobbyist, or a worse time to find common ground on issues.

Our government and political system desperately need effective policies that prioritize transparency and real-time access to information about how laws are made and how electioneering is paid for. People hate politics. So why is nobody talking about campaign finance reform? Mitt Romney, right, and Scott Brown stand at Bittersweet Farm shortly before Romney endorsed Brown in Stratham, N.H. on July 2. 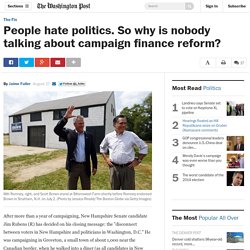 (Photo by Jessica Rinaldi/The Boston Globe via Getty Images) After more than a year of campaigning, New Hampshire Senate candidate Jim Rubens (R) has decided on his closing message: the "disconnect between voters in New Hampshire and politicians in Washington, D.C. " He was campaigning in Groveton, a small town of about 1,000 near the Canadian border, when he walked into a diner (as all candidates in New Hampshire inevitably do). "The entire room erupted," the former state senator said. "People were ready to vent their frustrations.

His anecdotal evidence is backed up by empirical data; when Gallup asked Americans what the top problem facing the nation was, many of the top answers have been variations on grumbling about the state of government today. A guide to campaign finance reform. As the clock ticks down to a midterm election in which the balance of power in Congress is very much in doubt, the corrosive effects and unintended consequences of the Supreme Court’s ruling in the Citizens United case in 2010 become more apparent with each new attack ad. 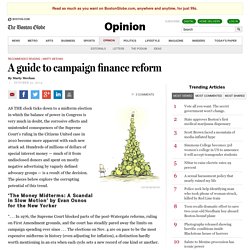 Hundreds of millions of dollars of special interest money — much of it from undisclosed donors and spent on mostly negative advertising by vaguely defined advocacy groups — is a result of the decision. The pieces below explore the corrupting potential of this trend. ‘The Money Midterms: A Scandal in Slow Motion’ by Evan Osnos for the New Yorker “. . . In 1976, the Supreme Court blocked parts of the post-Watergate reforms, ruling on First Amendment grounds, and the court has steadily pared away the limits on campaign spending ever since . . . Continue reading below “‘We have three elements today: unlimited contributions, corporate money, and secret money. Read more. Read more. Continue reading it below. Amid Barrage of Attack Ads, Incumbents Consider Tighter Rules. Americans for Campaign Reform.

Thanks, Citizens United, for This Campaign Finance Mess We're In - Adam Skaggs. Apologists for this damaging Supreme Court decision are wrong on the facts and the law. 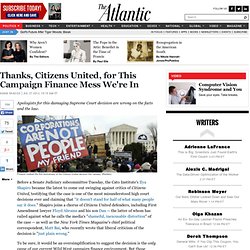 Protests marked the first anniversary of the Citizens United decision this January. (Reuters) Before a Senate Judiciary subcommittee Tuesday, the Cato Institute's Ilya Shapiro became the latest to come out swinging against critics of Citizens United, testifying that the case is one of the most misunderstood high court decisions ever and claiming that "it doesn't stand for half of what many people say it does. " Supreme Court Overturns Limits on Election Spending.