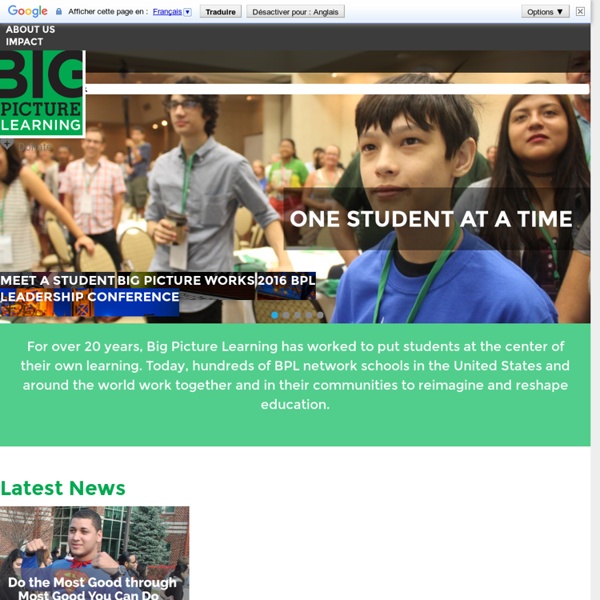 Wilderness Survival School | Wilderness Awareness School - Nature and Outdoor Survival School IALA - The International Association for Learning Alternatives UNESCO ASPNet The UNESCO Associated Schools Project Network, or ASPNet for short, is a program established in 1953 to encourage schools worldwide to educate students on issues related to UNESCO's "overarching goal of promoting peace and international understanding". As of 2008[update], it includes nearly eight thousand educational institutions in over 170 countries. ASPnet schools conduct their own projects, often linking with schools from other countries, or may become involved in a UNESCO-coordinated activity, such as the "World Heritage in Young Hands" project. A national coordinator, typically housed at the National Commission, serves as the liaison between the schools and UNESCO.[1] References[edit] External links[edit] Official website

Education Revolution - The website of the Alternative Education Resource Organization (AERO) EarthrootsFieldSchool.org | Cultivating a sense of care & connection with the natural world. Three language lessons you can learn from the word “schlemiel” In honor of National Poetry Month, let’s tackle some of the trickiest aspects of meaning — after all, poetry is one of the great ways to express subtle and slippery thoughts. Our focus today is translation. How can someone convey the meaning of a word that has no equivalent in another language? Among the toughest words to translate, and there are some doozies, schlemiel is a top contender. It is a Yiddish word for a chronically unlucky person. The trouble behind “schlemiel” presents us with a common translation problem – the translator will inherently run into words in one language that may not have an equivalent word in the other language. (Curious to learn some of the toughest words to convey in English, like prozvonit and hyggelig? Here are three tools that the skilled translator keeps at hand when faced with an untranslatable word. When confronted with a lacuna (a gap in a piece of writing), a translator may resort to free translation or adaptation. Dr. Mrs. Anonymous

A Model Of Excellence For Kids And Teens | Everything Counts! If you're new here, you may want to subscribe to my RSS feed. Thanks for visiting! Bobbi Deporter Imagine a camp where kids and teens learn to become exceptional human beings. This sound likes a really super camp doesn’t it? In 1982, Bobbi broke the mold by creating a learning and life skills academic summer program for youth. Just as Southwest Airlines changed our perceptions of flying and Starbucks changed our perceptions of coffee shops — SuperCamp has throw away the rule book and created an innovative category in engaged, joyful, successful learning. Here’s a note from a SuperCamp Graduate: “I have been a SuperCamper for two years. Bobbi DePorter has changed the lives of over four million kids around the world. You Are -- A to E The success of SuperCamp led Bobbi to create Quantum Learning school programs for educators and students. What impresses me most about Bobbi and the SuperCamp curriculum is their focus on excellence as a critical life skill.