Sal Khan: Let's use video to reinvent education. Fortune Brainstorm Tech: How to Reform Education and Revamp Schools. "The Scandal of K-12 Education" - and How To Fix It. Andrew Coulson, Cato.orgWriting in The Wall Street Journal, Fox News personality and author Juan Williams laments the sorry state of the nation's K-12 education system. 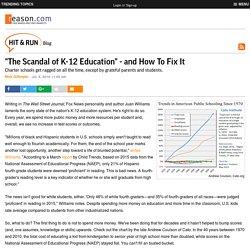 He's right to do so. Every year, we spend more public money and more resources per student and, overall, we see no increase in test scores or outcomes. "Millions of black and Hispanic students in U.S. schools simply aren't taught to read well enough to flourish academically. It’s 10 Years since ‘that’ TED Talk: 5 questions to think about #doschoolskillcreativity. A decade ago a revolution started in education, a groundswell for change. 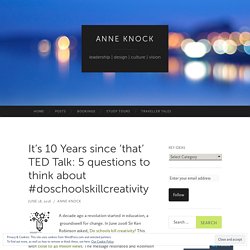 In June 2006 Sir Ken Robinson asked, Do schools kill creativity? This short talk has become the most popular of all time with close to 40 million views. The Building Blocks of Learning. The ancient Greeks had different words for different kinds of love — like Ludus (playful love), Pragma (longstanding love) and Agape (universal love). 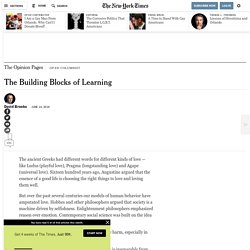 Sixteen hundred years ago, Augustine argued that the essence of a good life is choosing the right things to love and loving them well. But over the past several centuries our models of human behavior have amputated love. Hobbes and other philosophers argued that society is a machine driven by selfishness. Enlightenment philosophers emphasized reason over emotion. Contemporary social science was built on the idea that we’re self-interested, calculating creatures. The new education reform lie: Denver is a cautionary tale, not a model, for urban school districts. This article originally appeared on AlterNet. 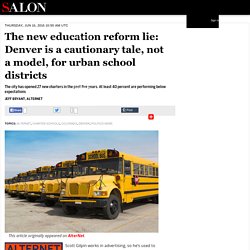 Could Steiner schools have a point on children, tablets and tech? It’s late morning and the children in Maria Woolley’s class at the Iona school in Nottingham are busy kneading dough. 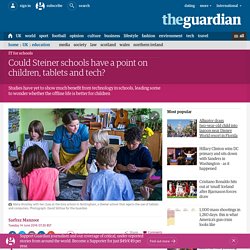 5 charts that explain the future of education. Children need to learn social and emotional skills if they are to thrive in the workplace of the future, a World Economic Forum report has found. 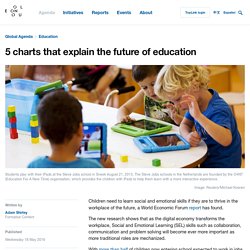 The new research shows that as the digital economy transforms the workplace, Social and Emotional Learning (SEL) skills such as collaboration, communication and problem solving will become ever more important as more traditional roles are mechanized. With more than half of children now entering school expected to work in jobs that don’t yet exist, adaptability is becoming a core skill. Social and Emotional Learning skills are those abilities that lie outside core literacies such as reading, writing and arithmetic. They allow creativity, problem solving and communication and have at their heart social interactions. Of 16 skills identified in the report as important for the 21st century, 12 are SEL. Students require 16 skills for the 21st century Image: WEF. Data breaches inspire new school curriculum. I continue to be amazed by the speed at which technological innovation offers new opportunities to all of us as entrepreneurs, employees, consumers and citizens. 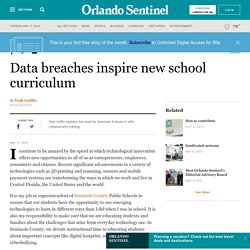 Recent significant advancements in a variety of technologies such as 3D printing and scanning, sensors and mobile payment systems are transforming the ways in which we work and live in Central Florida, the United States and the world. Routine, Ritual, and School Community. "Building a strong sense of community in schools is both important and doable," says Eric Schaps. 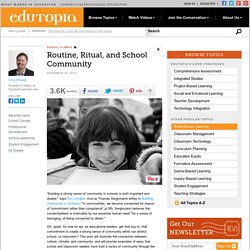 And as Thomas Sergiovanni writes in Building Community in Schools, "In communities, we become connected for reason of commitment rather than compliance" (p.58). Sergiovanni believes the connectedness is motivated by our essential human need "for a sense of belonging, of being connected to others. " OK, great. So how do we, as educational leaders, get that buy-in, that commitment to create a strong sense of community within our district, school, or classroom?

This post will illustrate the connection between culture, climate, and community, and will provide examples of ways that school and classroom leaders have built a sense of community through the use of routines. Culture + Climate = Personality + Attitude. Education: Poorly planned and implemented programs. Illustration: John Spooner So there has been a "decline and fall" in school standards (The Age, 12/5). 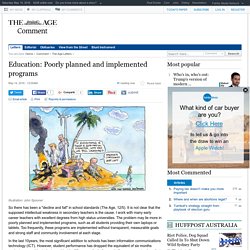 It is not clear that the supposed intellectual weakness in secondary teachers is the cause. I work with many early career teachers with excellent degrees from high status universities. Forbes Welcome. A Whole New Ball Game. School Innovation Trajectories: Steep Curves or a Quantum Step? Hitting a moving target is all about aim, velocity, and trajectory. 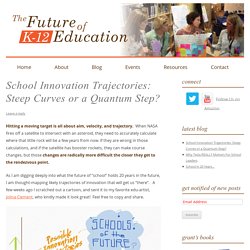 When NASA fires off a satellite to intersect with an asteroid, they need to accurately calculate where that little rock will be a few years from now. If they are wrong in those calculations, and if the satellite has booster rockets, they can make course changes, but those changes are radically more difficult the closer they get to the rendezvous point.

As I am digging deeply into what the future of “school” holds 20 years in the future, I am thought-mapping likely trajectories of innovation that will get us “there”. Creativity and independent thinking, built with Lego bricks, Education News. Students call him the "Lego teacher", and Mr Kazuya Takahashi of Kogakuin University Junior and Senior High School in Tokyo, Japan, has certainly earned the title. After all, the 35-year-old uses novel teaching methods, including the use of the plastic toy bricks, to teach independent thinking and creativity in subjects such as English. In a typical lesson, his students may be asked to form small groups and use the toy bricks to create stories about what they have learnt. How ubiquitous learning spaces can spur reflection.

(Ed Note: Susan Hennessey recently traveled to Malibu, California to check out some innovative schools there and attend Deeper Learning 2016.) What We Can't Learn from Finland's Schools: Apples, Oranges, and Denial. It happened again. This morning yet another Facebook friend clicked share on yet another article about how Finland is doing a better job educating kids than the US. The article mentioned the usual more recess time, teachers earning both more respect and more money, children starting kindergarten later. I know. I know. As a United States educator whose career began with the birth of “No Child Left Behind” and punishing mandates for high stakes testing, I’m tired of playing Jan to Finland’s Marcia.

The Problems and Promise of Educational Change. From President Obama on down, I’ve given up on educational policymakers having more than a glimmer of a clue when it comes to educational reform. Stem subject snobbery: a student’s view on why arts subjects matter. Lifehack. Uk.businessinsider. Defining Organizational Culture. How digital learning is changing education. Facebook Summit Personalized Learning Plan - Business Insider. Uk.businessinsider. Welcome to Forbes. The ABC Of Why Teachers Are Responsible For All Our Failures, And Other Political Silver Bullets. Last Friday, schools across NSW received their 2015 NAPLAN results. Major school curriculum changes coming to B.C. Jessica Lahey’s ‘The Gift of Failure’: A Fear of Risk-Taking Has Destroyed Kids’ Love of Learning. Why After A Decade Of Education Are Our Kids So Uneducated? How Educators Are Starting To Embrace The Concept Of 'Good Screen Time' Why Technology Will Never Fix Education.

5 things we should teach in school but don't - Business Insider. Let’s not use 21st century technology with 19th century pedagogy. Most Likely To Succeed.