Dangerous Ideas in Teacher Leadership - Prove It: Math and Education Policy. In my last post, I shared two things I have learned as a teacher leader and researcher of teacher leadership. 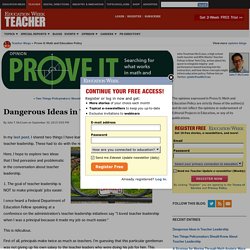 " This is ridiculous. First of all, principals make twice as much as teachers. Secondly, and more importantly, actual leadership means having the power to generate and implement new ideas. The power of teacher leadership lies in the idea that I can recognize a problem in the course of my interactions in my classroom and use this knowledge to impact school or district policy. 2.

Generations X,Y, Z and the Others...Social Librarian Newsletter - WJ Schroer Company. Generation X Born: 1966-1976 Coming of Age: 1988-1994 Age in 2004: 28 to 38 Current Population: 41 million Sometimes referred to as the “lost” generation, this was the first generation of “latchkey” kids, exposed to lots of daycare and divorce. 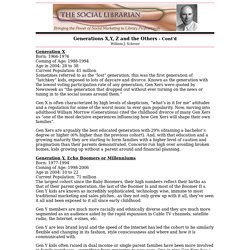 Known as the generation with the lowest voting participation rate of any generation, Gen Xers were quoted by Newsweek as “the generation that dropped out without ever turning on the news or tuning in to the social issues around them.” Gen X is often characterized by high levels of skepticism, “what’s in it for me” attitudes and a reputation for some of the worst music to ever gain popularity. Now, moving into adulthood William Morrow (Generations) cited the childhood divorce of many Gen Xers as “one of the most decisive experiences influencing how Gen Xers will shape their own families”.

Gen Xers are arguably the best educated generation with 29% obtaining a bachelor’s degree or higher (6% higher than the previous cohort). What If Teachers Were Charged With Setting School Direction? Making Students Partners in Data-Driven Approaches to Learning. The following excerpt is from “Leaders of Their Own Learning: Transforming Schools Through Student-Engaged Assessment,” by Ron Berger, Leah Rugen, and Libby Woodfin. 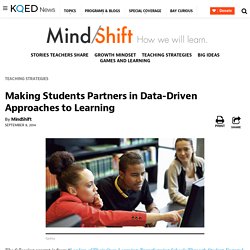 This excerpt is from the chapter entitled “Using Data With Students.” At Genesee Community Charter School in Rochester, New York, third-grade teacher Jean Hurst leans in and listens intently as her student, Jacelyn, reads aloud. Hurst is listening for greater fluency in Jacelyn’s oral reading, a skill they have been working on for several weeks. As she listens, she hears greater cadence and confidence in Jacelyn’s voice.

Hurst is careful to note miscues and the length of time it takes Jacelyn to read the passage. Hurst and Jacelyn discuss how her substitution enabled her to make sense of what she was reading without slowing down her overall rate. Using data with students encompasses classroom practices that build students’ capacity to access, analyze, and use data effectively to reflect, set goals, and document growth. Why Businesses Should Serve Consumers’ ‘Higher Needs’ Snapchat received a $10 billion valuation this week, joining an ever-increasing number of young IPOs and startup companies that are meeting consumers’ evolving needs to create extraordinary value for investors. 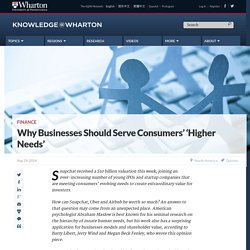 How can Snapchat, Uber and Airbnb be worth so much? An answer to that question may come from an unexpected place. American psychologist Abraham Maslow is best known for his seminal research on the hierarchy of innate human needs, but his work also has a surprising application for businesses models and shareholder value, according to Barry Libert, Jerry Wind and Megan Beck Fenley, who wrote this opinion piece. In 1943, Abraham Maslow developed his formative work on the hierarchy and progression of human needs, “a theory of psychological health predicated on fulfilling innate human needs in priority, culminating in self-actualization.” Maslow would probably be surprised today to discover that a similar progression can also be observed in the business world.