Debating the Value of College in America 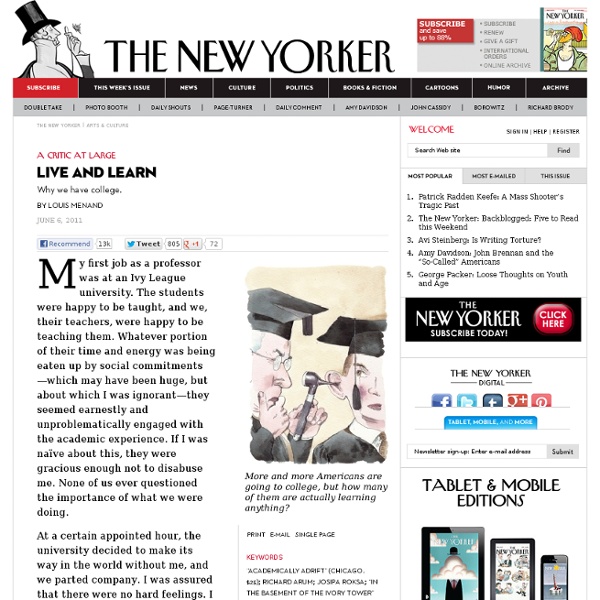 My first job as a professor was at an Ivy League university. The students were happy to be taught, and we, their teachers, were happy to be teaching them. Whatever portion of their time and energy was being eaten up by social commitments—which may have been huge, but about which I was ignorant—they seemed earnestly and unproblematically engaged with the academic experience. If I was naïve about this, they were gracious enough not to disabuse me. None of us ever questioned the importance of what we were doing. At a certain appointed hour, the university decided to make its way in the world without me, and we parted company. I didn’t regard this as my business any more than I had the social lives of my Ivy League students. I got the question in that form only once, but I heard it a number of times in the unmonetized form of “Why did we have to read this book?” College is, essentially, a four-year intelligence test. I could have answered the question in a different way. Related:  Higher Ed

85% Of Recent College Grads Will End Up Living With Mom And Dad 3-year college degree programs not catching on Reformers have hailed the three-year degree as the potential salvation of higher education: a rewrite of the academic calendar that lowers the price of college by compressing it into 36 months. Several institutions have launched three-year degrees in a flurry of activity triggered by the economic downturn that began in 2008. Political leaders in at least two states, Ohio and Rhode Island, have instructed public colleges to offer accelerated degrees. But students have not responded, and most three-year degree programs have flopped — a reminder, college leaders say, that students still regard college as an experience to be savored. Why rush the best four years of your life? The University of North Carolina at Greensboro, a campus of 17,500 students, enrolled five students last year in its inaugural three-year degree program. There are exceptions. Katie Miller enrolled in the three-year degree program at Manchester, a liberal arts college southeast of Chicago. Pluses, though few takers

Higher Ed Analytics: Give Recommendations, Not Numbers by Seth Odell Guest post by Eric Olsen Web Content Manger, Lewis University Did you know that many analytic tools such as Google Analytics can automate weekly or monthly reports, and e-mail them directly to your higher-ups? Isn’t that cool? Please don’t ever use this feature. When working with analytics, don’t present numbers. For instance, Google Analytics includes a Site Search metric that lets you see the most popular search terms used within your internal search engine, if you have one. That’s what your Higher Ed Analytics report should be – a highlight reel and action-item suggestions. Use In-Page Analytics to see exactly how users navigate your menus. Are you getting it? Your recommendation? “What? Traffic.

News: Saying More With Less Mission statements, despite being referenced as the philosophical essences of their respective institutions, don't get much respect on college campuses. Often wordy and cumbersome, they don't get the airtime or T-shirt placement enjoyed by new advertising slogans or the classic Latin motto. Everybody in Cambridge knows "Veritas," but you'd be hard-pressed to find a sweatshirt with the 220-word statement that starts with "Harvard College adheres to the purposes for which the Charter of 1650 was granted." But University of Rochester Provost Ralph W. "A mission statement isn't about what you do day to day, and it's not a vision statement about the hopes for the institution," Kuncl said. Mission statements tend to be discussed more in the corporate world than in higher education, but Kuncl's effort to highlight Rochester's mantra raises questions about the role such declarations could or should play at colleges and universities. It also raises questions about the best format for them.

Standing Up for the Journalism Degree: It Is Not Useless Last week, the Business Insider ran a post disparaging the values of a journalism degree. In “﻿﻿Degrees Are Useless And Other Tips For Aspiring Journalists,” author Jean Prentice writes, “anyone who has graduated from journalism school and gone on to work in the industry can tell you that a degree in journalism is useless.” She argues hard work and experience are what will land you a job after graduation. She is not alone in saying journalism degrees are useless. In April, journalism topped the Daily Beast’s list of 20 Most Useless Degrees. Journalism doesn’t pay well and your student loans may very well be greater than your first salary as a reporter. Yes, it’s true hard work and experience are important. I, for one, am a proud 2007 graduate of the S.I. “Having the degree allowed me to get to where I am today. Another Newhouse grad, Julianne Pepitone, who graduated in ’08, landed a job as a staff reporter at CNNMoney at 22.

Bringing Transparency to College Costs Cross-posted from the White House Blog. More and more, Americans understand the critical role that earning a college degree plays in their lives, with prospects for higher earnings and further advancements that extend throughout their careers. However, one of the greatest challenges Americans face is the rising cost of higher education. To help students make informed decisions about their choice for higher education, today the Department of Education launched an online College Affordability and Transparency Center on the Department of Education’s College Navigator website. As part of this Center, the Department posted lists that highlight institutions with the highest tuition prices, highest net prices, and institutions whose prices are rising at the fastest rates. Institutions whose prices are rising the fastest will report why costs have gone up and how the institution will address rising prices. Ultimately, better information alone will not cure the problem of college affordability.

What Role Does Social Media Play in College Admissions? [INFOGRAPHIC] ‘Tis the season for high school seniors to run to the mailbox, or their email inbox these days, to sort through college acceptances and rejections. It may be too late for this year’s seniors, but should their classmates in grades below “friend” their top college choice on Facebook, or run to change their privacy settings? A recent study by education company Kaplan found that more than 80 percent of America’s top colleges use popular social media sites like Facebook, Twitter and YouTube in their recruiting processes. That prompted Schools.com, a college guidance site, to create the below infographic showing just what role social media plays in whether a high school senior ends up at Harvard, or perhaps wishing they had never posted that senior party picture on Facebook. Some of the results may surprise you. It’s also not a bad idea to “friend” your top college choices. Take a look and tell us what you think. Courtesy of: Schools.com

Where YouTube EDU Went Wrong (and how it might recover) by Higher Ed Live YouTube‘s educational portal, YouTube EDU, entered its third year of operation this past week. In spite of some very optimistic publicity for its initial launch, its development as a teaching-and-learning tool has thus far proven rather lackluster. YouTube has shown little effort in expanding and supporting the site, and few institutions in higher education have made significant academic contributions to it. YouTube.com/edu w as originally intended as an opportunity for colleges and universities around the world to post educational content online for anyone’s free access. Schools of higher education seem partly to blame for their lack of effort to provide high-quality academic content. Where are the contributions from our colleges and universities? Contrast that with schools that lead the way in providing online academic content: 13,442 viewers had checked out videos put up by MIT; 13,671 had clicked on Harvard’s. But Mallory Wood, assistant director of marketing at St.

Building a Student Blogger Program by Seth Odell Special guest host Mallory Wood and Stonehill Assistant Director of Admissions Evan Grenier breakdown best practices for building a student blogger program. One of the most authentic voices for your campus, tapping into students to tell your story is a must for any university. From identifying great bloggers to selecting a blogging platform, Mallory and Evan breakdown what makes great content and detail how to build a program that reflects your institution’s voice and works for you. Weekly 5 Why Colleges & Universities Should Blog (Part 1) Students Who Use Facebook More for Self-Promotion Show Less Concern for Others Elite Colleges Fail to Gain More Students on Pell Grants HOW TO: Improve Engagement on Your Brand’s Facebook Page [STATS] StumbleUpon Hits 1 Billion Stumbles per month Unsolicited Shout-out of the Week Have you submitted your #heweb11 proposal? Comprehensive (and growing) list of all higher ed student blogger programs From our sponsors:

Top 10 YouTube Videos Posted by Colleges, and What They Mean - Wired Campus More than 400 colleges and universities have set up channels on YouTube as part of the YouTube EDU section of the popular video site, but university officials admit they are still experimenting with the service and learning what types of videos resonate with off-campus audiences. With data provided by YouTube, The Chronicle has determined the 10 most popular videos on YouTube EDU of the 2010-11 academic year (from June 2010 to June 2011). Some college officials stress that popularity is not always their main goal—because many colleges upload lectures and study materials designed for those enrolled in the courses. Still, the list gives a sense of the variety of videos colleges post and their impact. Star-studded commencement speeches seem to be the best way for colleges to draw viewers. Four graduation videos made it onto the top-10 list, and three of the four featured high-profile celebrity speakers: Tom Hanks, Denzel Washington, and Conan O’Brien. No traditional lectures made the list.

Growing Reach with Facebook Ads One-third of all ads viewed on the internet are Facebook ads. They are simple to create, cheap, can be highly targeted and, when used well, very effective. One of the simplest things you can use them for is to expand the reach of your social media accounts by targeting individuals who should be following, but haven’t taken the initiative to find you on their own. For example, I recently placed some ads to try to increase “likes” on the official Southern New Hampshire University Facebook page. Targeting both alumni and current students was a no-brainer, so I set up a simple add to display for individuals with those affiliations but who were NOT connected to the page (no use in advertising to individuals already connected to you!) Then I went a step further. The results speak for themselves. So clearly Facebook ads are a great way to reach an audience on Facebook…but what about other mediums? I also set up this generic one to test against, which is still running today: The result?