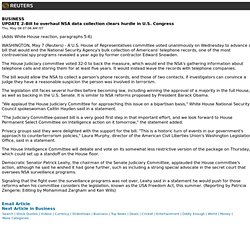 Congress Thu, May 08 07:06 AM IST (Adds White House reaction, paragraphs 5-6) WASHINGTON, May 7 (Reuters) - A U.S. The House Judiciary committee voted 32-0 to back the measure, which would end the NSA's gathering information about telephone calls and storing them for at least five years. The bill would allow the NSA to collect a person's phone records, and those of two contacts, if investigators can convince a judge they have a reasonable suspicion the person was involved in terrorism. The legislation still faces several hurdles before becoming law, including winning the approval of a majority in the full House, as well as backing in the U.S. 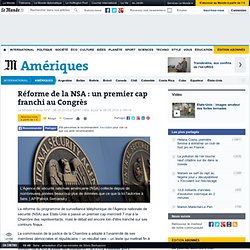 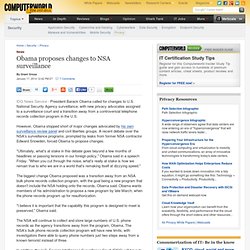 National Security Agency surveillance, with new privacy advocates assigned to a surveillance court and a transition away from a controversial telephone records collection program in the U.S. However, Obama stopped short of major changes advocated by his own surveillance review panel and civil liberties groups. "Ultimately, what's at stake in this debate goes beyond a few months of headlines or passing tensions in our foreign policy," Obama said in a speech Friday. The biggest change Obama proposed was a transition away from an NSA bulk phone records collection program, with the goal being a new program that doesn't include the NSA holding onto the records, Obama said. "I believe it is important that the capability this program is designed to meet is preserved," Obama said.

In addition, the U.S. Reprinted with permission from IDG.net. Obama invokes history for context in surveillance reform speech. News By Zach Miners January 17, 2014 03:41 PM ET IDG News Service - President Barack Obama positioned his proposals for government surveillance reforms within the context of U.S. history to argue that spying is -- and always has been -- necessary. 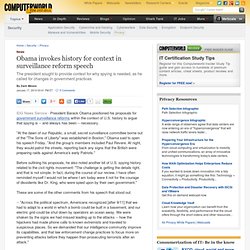 "At the dawn of our Republic, a small, secret surveillance committee borne out of the "The Sons of Liberty" was established in Boston," Obama said to open his speech Friday. "And the group's members included Paul Revere. Before outlining his proposals, he also noted another bit of U.S. spying history related to the civil rights movement: "The challenge is getting the details right, and that is not simple. These are some of the other comments from his speech that stood out: -- "Across the political spectrum, Americans recognized [after 9/11] that we had to adapt to a world in which a bomb could be built in a basement, and our electric grid could be shut down by operators an ocean away.

Reprinted with permission from IDG.net. Obama talks NSA: EFF, Julian Assange, White House respond. Just this morning, United States President Barack Obama spoke up at a bit of NSA news, letting it be known what his real NSA reform plan would be. 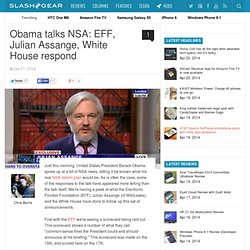 As is often the case, some of the responses to the talk have appeared more telling than the talk itself. We're having a peek at what the Electronic Frontier Foundation (EFF), Julian Assange (of WikiLeaks), and the White House have done to follow up this set of announcements. First with the EFF we're seeing a scorecard being laid out. This scorecard shows a number of what they call "common-sense fixes the President could-and should-announce at his briefing. " 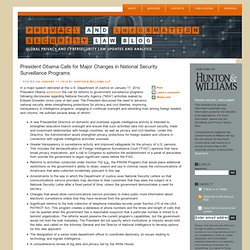 He outlined several areas of reform: A new Presidential Directive on domestic and overseas signals intelligence activity is intended to strengthen executive branch oversight and ensure that such activities take into account security, trade and investment relationships with foreign countries, as well as privacy and civil liberties. The White House.