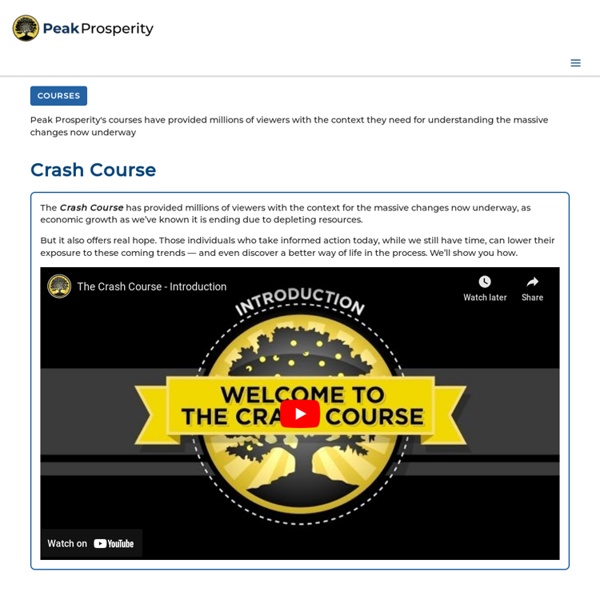 The Crash Course has provided millions of viewers with the context for the massive changes now underway, as economic growth as we've known it is ending due to depleting resources. But it also offers real hope. Those individuals who take informed action today, while we still have time, can lower their exposure to these coming trends -- and even discover a better way of life in the process. We'll show you how. For the best viewing experience, watch the above video in hi-definition (HD) and in expanded screen mode How long will it take? Chapters are between 3 and 25 minutes in length. Chapter Menu (click each to play): Each week, the next chapter of this new Crash Course series will be made available to the public. For those who don't wish to wait that long to watch the entire series, simply enroll. The 'Classic' Crash Course Looking to find the original series from 2008? Having Trouble Viewing The Crash Course? Related:  debt economy

85 Super Wealthy People Have More Money Than The Poorest 3.5 Billion Combined Submitted by Michael Snyder of The Economic Collapse blog, The global economy is structured to systematically funnel wealth to the very top of the pyramid, and this centralization of global wealth is accelerating with each passing year. According to the United Nations, 85 super wealthy people have more money than the poorest 3.5 billion people on the planet combined. And 1.2 billion of those poor people live on less than $1.25 a day. There is something deeply, deeply broken about a system that produces these kinds of results. Now, let me make one thing clear at the outset. Big government and more socialism are not the answer to anything. What we need is a system that empowers individuals and families to work hard, be creative, build businesses and to take care of themselves. But instead, we have a system where all power and all wealth are increasingly controlled by giant banks and giant corporations that are in turn controlled by the global elite. But that is only what we know about.

Bankaholic.com - Best money market, savings, and CD account rates. High Inequality Results in More US Deaths than Tobacco, Car Crashes and Guns Combined | Blog, Q&A In 2009, the British Medical Journal (BMJ) published a study that revealed what seems to be a shocking truth: those who live in societies with a higher level of income inequality are at a greater risk for premature death. Here in the United States, our high level of income inequality corresponds with 883, 914 unnecessary deaths each year. More specifically, the report concluded that if we had an income distribution more like that of the Netherlands, Germany, France, Switzerland — or eleven other wealthy countries — every year, about one in three deaths in the US could be avoided. Put that into perspective. The mechanism by which a bullet or a car crash kills is readily apparent. In Divided: The Perils of Our Growing Inequality, a new book edited by Pulitzer Prize-winning journalist David Cay Johnston, Stephen Bezruchka, a former emergency room physician who is now a professor of public health at the University of Washington, explains the connection. Bezruchka: Sure.

It's official! Economics students are being misinformed, says Bank of England Written by Graham Hodgson (Guest Author) on . Since at least the 1960s, central bankers have, in their ones and twos, been quietly airing the message through ill-reported speeches and evidence to official committees that money is created by private banks when they make loans. But in their pronouncements targeted at the general public they have persisted in reiterating the fictions promoted by economics textbooks about relending deposits and reserve requirements and the money multiplier. Now the Bank of England, in its 320th year, has officially acknowledged that the tosh that is taught to economics students the world over is indeed tosh. The sneering naysayers who persistently attacked Positive Money over the first two or three years of our campaign can now be roundly trounced by this official corroboration (if, indeed, there are any still remaining to be trounced). But the Bank does still insist that money is an IOU. Trackback from your site.

What's Wrong with the Money Multiplier Model? (Banking 101 Part 2) The money multiplier story The money multiplier story says that banks actually create much of the money in the economy. Here’s how the story goes: A man walks into a bank and deposits his salary of £1000 in cash. So the multiplier model that is still taught in many universities implies that this repeated process of a bank taking money from a customer, putting a little bit into a reserve, and then lending out the rest can create money out of nothing, because the same money is double-counted every time is it relent. An inaccurate and outdated way of describing how the banking system works The fact is that what we’ve just shown you is completely wrong. The fact that this pyramid model is still used is a problem for three reasons: Firstly, this model implies that banks have to wait until someone puts money into a bank before they can start making loans. Secondly, it implies that the central bank has ultimate control over the total amount of money in the economy.

Change to UK's money system could solve our long-term economic problems Paper notes and metal coins make up just 3% of all the money in the UK. The remaining 97% consists of numbers in banks' computer systems. Photograph: Hire Image Picture Library/Alamy Exactly 170 years ago, the UK government passed a law to deal with a banking crisis that was uncannily similar to the one we've just endured. The Bank Charter Act 1844 prohibited anyone other than the Bank of England from printing paper money. Naturally, banks found it hard to resist the temptation to make more loans by simply printing more paper money. But the 1844 law was never updated to apply to electronic money and still only applies to paper notes. In the decade preceding the financial crisis, banks created more than a trillion pounds of new money – and new debt – this way. Now imagine if we updated the laws so that banks were prohibited from creating both paper and electronic money. It could even give everyone their equal share – an idea described as quantitative easing (QE) for the people.

Trickle-down economics is the greatest broken promise of our lifetime | Alex Andreou The richest 85 people in the world have as much wealth as the poorest 3.5 billion – or half the world's entire population – put together. This is the stark headline of a report from Oxfam ahead of the World Economic Forum at Davos. Is there a reason why the world's powerful, gathering at the exclusive resort to sip cognac and eat blinis, should care? Well, yes. If one subscribes to the charitable view that neoliberal philosophy was simply naive or misguided in thinking that "trickle down" would work infinitely, then evidence that it doesn't, should be cause for concern. Even if one subscribes to the cynical view that the elite knew what they were doing all along, observing that the "rising tide" is lifting fewer and fewer boats and leaving more and more to rot in the sediment – both at a personal and national level – must make most wonder "am I in the right boat and is it big enough?" It is not so much that the supply-side principle "if you build it, they will come" is no longer true.

Debt Problems: Why is There So Much Debt? Before the financial crisis, 97% of money in the UK was created by private banks making loans. The only way to get extra money into the economy is to borrow it from banks, leaving us all trapped under a mountain of personal debt and mortgages. 1. Banks create new money when people go into debt When you take out a loan, new money is created. 2. Because banks create money when people borrow, for every pound of money in the economy there will be a pound of debt. 3. If we need to get more money into the economy – for example, during a recession – then we have to go further into debt to the banks. But if the financial crisis was caused by people having too much debt, how can the solution be for people to take on more debt? 4. When you pay down your debts, the money that leaves your bank account doesn’t go to anyone else – it just disappears. So when lots of people try to pay down their debts at the same time, money disappears from the economy.

Dare to declare capitalism dead – before it takes us all down with it | George Monbiot For most of my adult life I’ve railed against “corporate capitalism”, “consumer capitalism” and “crony capitalism”. It took me a long time to see that the problem is not the adjective but the noun. While some people have rejected capitalism gladly and swiftly, I’ve done so slowly and reluctantly. Part of the reason was that I could see no clear alternative: unlike some anti-capitalists, I have never been an enthusiast for state communism. But as I’ve grown older, I’ve come to recognise two things. Capitalism’s failures arise from two of its defining elements. Those who defend capitalism argue that, as consumption switches from goods to services, economic growth can be decoupled from the use of material resources. A system based on perpetual growth cannot function without peripheries and externalities. This drives us towards cataclysm on such a scale that most people have no means of imagining it. Like coal, capitalism has brought many benefits. So what does a better system look like?