How a 140-Character Twitter Resume Could Land Your Next Job 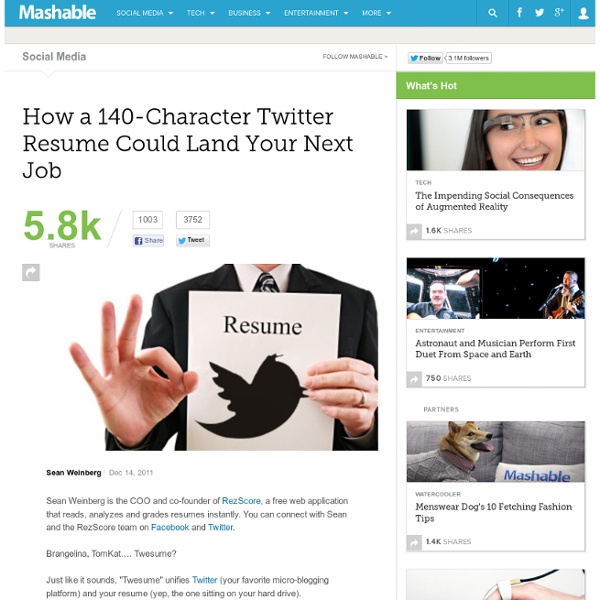 Sean Weinberg is the COO and co-founder of RezScore, a free web application that reads, analyzes and grades resumes instantly. You can connect with Sean and the RezScore team on Facebook and Twitter. Brangelina, TomKat…. Twesume? Just like it sounds, "Twesume" unifies Twitter (your favorite micro-blogging platform) and your resume (yep, the one sitting on your hard drive). In essence, a Twesume is a short bio or resume condensed into 140 characters or less. What's the Big Deal? Like it or not, social media is only getting more influential. How Can I Write My Own Twesume? If you’re interested in jumping on the Twesume bandwagon, all you need is a Twitter account and something to say. Santa Claus: World traveler and toy expert. 300+ years management experience. Image courtesy of iStockphoto, SchulteProductions

Can Facebook Get You a Job? [INFOGRAPHIC] In answer to the question above, approximately 18,400,000 Americans say yes, they got their current job through Facebook. Though Zuck's platform ranks #1, Twitter and LinkedIn don't have shabby numbers either — 8 million and 10.2 million Americans, respectively, have gotten their jobs through social platforms. Judging from our Job Search Series, it should come as no surprise that being socially savvy pays off in the job hunt for two reasons — it helps you network, and it's a highly marketable strength in your skill set, given all the openings in the digital space. So, it's about time you spruce up those social profiles and start networking.

36 Million Reasons To Use Social Media To Find Your Next Job [INFOGRAPHIC] 341 Flares Filament.io 341 Flares × Yes, there are that many reasons your next job should be found through Social Media. In fact, this is the number of people that have used either Twitter, LinkedIn or Facebook for finding a job this year in America alone. Personally, I think that this is a mindblowing number.

Can Pinterest Help Your Job Search? Sean Weinberg is the COO and co-founder of RezScore, a free web application that reads, analyzes and grades resumes instantly. You can connect with Sean and the RezScore team on Facebook and Twitter. Just when you thought you had mastered the job search on all social media platforms, along came Pinterest. You’ve optimized your Facebook and LinkedIn pages and you’ve got the Twesume. Now it’s time to amp up your job search even more by putting your resume on Pinterest.

The A-Z Dictionary of Educational Twitter Hashtags Whether you’re a new or seasoned Twitter user, you likely come across confusing hashtags that probably look like a bunch of nonsense. First, What’s A Hashtag? The # symbol, called a hashtag, is used to mark keyword or topic in a Tweet. Any Twitter user can categorize or follow topics with hashtags.Those hashtags (usually) mean something and are a great way to get a tweet to appear in search results or discussion monitoring. Pentagull Ltd: Case Study - Supported Employment Customer Background Progress Employment Support is a not-for-profit limited company formed in 2002 with a purpose of assisting more disabled people into valued jobs and more employers reaping the benefits of a diverse workforce. The primary role is to support disabled people and their employers to benefit from working together and make employment a reality. Financial support comes from a range of funding sources with inclusive employment remaining a priority across the political landscape. Business Needs Progress Employment Support faced the following challenges:

More Teens Turning to Twitter Despite being limited to 140-characters, teens are increasingly turning to Twitter to post comments, links, photos, and daily musings. From September 2009 to July 2011, Twitter usage in teens aged 12 to 17 doubled, rising from 8% to 16%., according to a study from the Pew Research Center. Experts are saying the jump is significant given that the increase in use of social networking website Facebook among teens in the same age bracket was just 7% during the same period. Lancaster University Students and graduates Access help and advice, search for opportunities, see what events are taking place, apply for the Lancaster Award, explore further study options and other pathways to your future career. Prospective students Find out how we create one of the best student experiences in the UK and what Lancaster has to offer. Employers Lancaster University students and graduates are amongst the most employable in the UK.

Ten meta-trends impacting learning In a world where libraries are completely reinventing themselves, where universities and schools are moving away from labs to BYOD, and where the focus of everything seems to be on mobiles —what will be the role of technology in the next decade? What do leading institutions need to be doing now to prepare? What are the strategies that will provide them the most flexibility? The greatest competitive advantage? These are the overarching questions that recently drove the discussions at 10th anniversary New Media Consortium Horizon Project special convocation and retreat. How Do We Prepare Students For Jobs That Don’t Exist Yet? Education has truly come a long way. However, it still has a very long way to go. Thanks to social networks like Twitter, teachers are able to collaborate and share resources like never before.

MIT OpenCourseWare: Will it work for you? inShare19 Since the establishment of the first university in 1148, these institutions have primarily been reserved for those who could afford a higher education. This was a clear denial of the four human rights in education : Interviews do's and don'ts An interview is a discussion between you and an employer to find out if you can do the job. However, there are certain rules to follow in interviews. Here's a checklist of the main do's and don'ts. What to do: What not to do:

10 Pro Tips for Writers Using Social Media We recently covered 10 inspiring social networks for writers that can help you extend your influence and develop your content. But what about the mainstream networks? How do you successfully raise your profile and gain a following? Six well-known authors and writers, who are experts in this type of personal branding, share their methods and suggestions on how to use social media to push yourself forward in the writing industry.