How to Build an App Empire: Can You Create The Next Instagram? 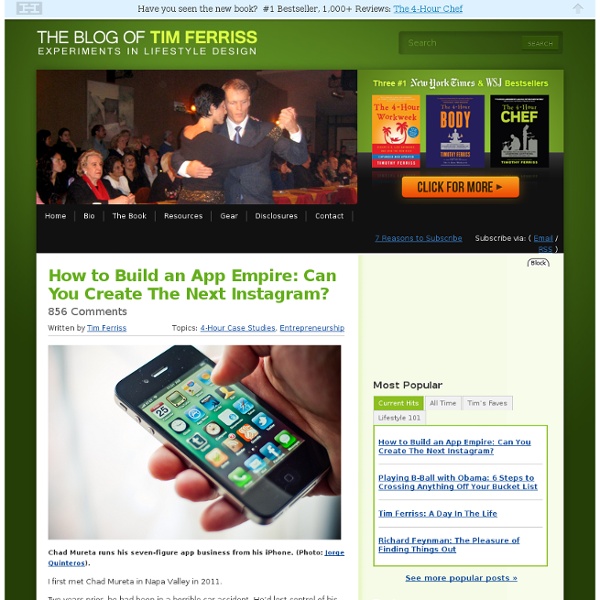 Chad Mureta runs his seven-figure app business from his iPhone. (Photo: Jorge Quinteros). I first met Chad Mureta in Napa Valley in 2011. Two years prior, he had been in a horrible car accident. While in the hospital for a lengthy recovery, a friend gave him an article about the app market. “In just over two years, I’ve created and sold three app companies that have generated millions in revenue. After finishing rehab, Chad was able to leave his real estate company, where he’d been working 70 hours a week, to run his app business from his iPhone… in less than 5 hours per week. “Apps” are the new, new thing, thanks to major successes like Draw Something (bought by Zynga for $210 million) and Instagram (bought by Facebook for $1 billion), among others. In this post, Chad will discuss his step-by-step formula for rapid app development and sales optimization. Last but not least, don’t miss the competition at the end. Enter Chad Mureta I nearly couldn’t. The Opportunity for Appreneurs

double coconut muffins I hadn’t meant to disappear on you, and what’s worse, I have a terrible excuse: I took a nap. In the same week that I conquered my cooking Mount Everest — a lasagna I’d only dreamed about for the better part of six years, one that still took me many tries in the kitchen to get right and more than a week just to write — I was going back and forth with my publisher over the page designs for my cookbook, and (no doubt) giving some poor book designer some gray hairs. One day, I’ll remind my editor about that time I said that I didn’t care how the book looked, “just make it pretty!” and she’ll snort coffee out her nose. It will probably be a while. We’re also officially in the part of the year I affectionately call The Dregs of Winter. Alas, this daydream of a trip is still two very long weeks away, so I sublimated my wanderlust, as I always do, in baked goods. Double Coconut Muffins Preheat oven to 375°F. [Oh, you’re out of paper liners too?

APPEL AUX STARTUPS FRANCAISES How to Make Money on iPhone Apps How many times has a friend showed you his or her favorite new iPhone app, and you lamented: Why didn't I think of that? With total application downloads from Apple's iTunes app store topping three billion, and monthly sales of upwards of $200 million, the marketplace for apps is booming. If you're a designer or programmer, how can you afford not to be creating apps? Well, it's not quite that simple. Apple says it receives between 8,500 and 10,000 application submissions every week. Greg Trefry, a veteran game designer who teaches at New York University's Interactive Telecommunications Program, recently founded Gigantic Mechanic with Mattia Romeo. "There are so many apps out there, it's an extremely crowded market so that the barrier to entry is so low and the barrier to success is so high," he says. Of course, there's more to making a profitable app than just having a good idea. Dig Deeper: More News on Apple's iPhone Making Money on iPhone Apps: Getting Approved

Winter 2012 Preview! | Random Curiosity It feels like 2011 went by in the blink of an eye, as I haven’t even had a chance to look back on my favorites of the year. Before I do so, let’s first take a look at what’s just around the corner in the new year. Winter is generally not one of the busier seasons, but there are actually 23 offerings in 2012, which is pretty close to the 27 this past fall. Of the new titles, some of them stood out immediately — the sequel to my favorite romance of 2010 Amagami SS, the horror series Another, the sequel to Sousei no Aquarion, the TV version of Black Rock Shooter, the sequel to Bakemonogatari, and the fourth and final season of Zero no Tsukaima — but as is often the case when I put together a season preview, I discovered many are a lot more interesting than they originally appeared. Best of all, there is a wide variety of shows from various different genres, so there’s a good chance there will be something for everyone. Care to find out which ones I’m talking about? TV Series OVA / Movie

60 Useful iPhone Applications Apr 13 2011 Owning an iPhone is a dream for most people nowadays. And why not… it’s equipped with smart apps and softwares that leaves mouths wide open in astonishment. To continue this legacy of the iPhone, we’ve searched for even more applications to make your iPhone your best friend, navigator and adviser. Gilt for iPad You can shop for fashion and luxury brands at get up to 70% discounts. Its a member only community. WordPress Now you can edit, Manage and moderate your WordPress blog and/or website from your iPhone through this wonderful application. Simultravel GPS With Simultravel you can locate hotels around your location while you travel. Adobe Ideas Its your digital sketch book which lets you capture ideas anywhere you go. Hey Where Are You : Location Service (HeyWAY) (HeyWAY) is a location service with which you can keep track of your family, friends or employees and you will get constant updates on their location and they can also request the details from you. Yahoo! Yowza!!

Dave Rapoza How Much Does It Cost To Develop an App | iPhone App Development Costs Table of Contents Types of AppsApp Development ProcessDevelopment CostsDesign CostsTotal CostsFree iPhone App Quote Overview In the past two years, the app market has exploded. And for good reason. The good news? Let’s talk about what goes into getting an app developed. Types of Apps You Can Develop There are many different kinds of apps you can develop. Basic table functionality – think about this as a hierarchy: opening screen has big topics and you click one and you now have a set of new lists to click on. The type of app you want to develop may change based on how much content you have and how much control you want to have over the entire process. App Development Process The app development process can be broken out into four major parts – idea, layout and planning, design, and going live. 1. This is the first genesis of where the app will be going and one step after “I want an app.” 2. 3. 4. iPhone App Development Costs iPhone App Design Costs Total App Costs There Is Another Way

Free College: How to Audit Courses From 7 Elite Schools Online Danny Gallagher is a freelance writer, reporter and humorist who also contributes to TruTV's Dumbasablog.com, Playboy's TheSmokingJacket.com and TheFW.com. He can be found on the web at dannygallagher.net or on Twitter @thisisdannyg. Getting accepted to a prestigious Ivy League school has its perks — and its price tag. But thanks to the Internet, you don’t have to take on mountains of debt to snag a piece of that educational pie. SEE ALSO: How Online Education Is Changing the Way We Learn [INFOGRAPHIC] Image courtesy of Flickr, Paul Lowry

Accessing iPhone Call History « Bushra Shahid's iOS stuff Although there is no API in the SDK to access iPhone’s Call History, there is a read-only SQLite database that gives access to the call history. In this tutorial, we shall learn what is the name of this database; where is it stored; what is its schema; and finally how can we access it? Call History Database – Path, and Schema The iPhone call history is stored in “call_history.db” which is located at the following path: /private/var/root/Library/CallHistory/call_history.db There are other important databases on the iPhone, some of which are accessible and some are not. I got the following results: var/db/launchd.dbvar/mobile/Library/AddressBook/AddressBook.sqlitedbvar/mobile/Library/AddressBook/AddressBookImages.sqlitedbvar/wireless/Library/CallHistory/call_history.db Feel free to share yours :) So now we have the database path and we can easily read the values stored in it, but to know what value is what we need to know the schema. You will get something like this: Accessing the Call History

OpportunisticRefactoring refactoring tags: From the very beginning of when I started to talk and write about refactoring people have asked me how it should be incorporated into the wider software development process. Should there be refactoring phases in the software development lifecycle, what proportion of an iteration should be devoted to refactoring tasks, how should we figure out who should be assigned to refactoring duties? What this means is that at any time someone sees some code that isn't as clear as it should be, they should take the opportunity to fix it right there and then - or at least within a few minutes. This opportunity can come at various parts of implementing some new functionality or fixing a bug. As you add the functionality, you realize that some code you're adding contains some duplication with some existing code, so you need to refactor the existing code to clean things up. Sometimes you see an opportunity when you're in the middle of something else.