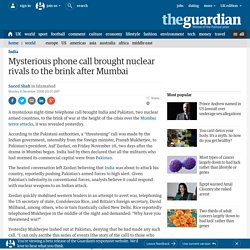 According to the Pakistani authorities, a "threatening" call was made by the Indian government, ostensibly from the foreign minister, Pranab Mukherjee, to Pakistan's president, Asif Zardari, on Friday November 28, two days after the drama in Mumbai began. India had by then declared that all the militants who had stormed its commercial capital were from Pakistan. The heated conversation left Zardari believing that India was about to attack his country, reportedly pushing Pakistan's armed forces to high alert. Given Pakistan's inferiority in conventional forces, analysts believe it could respond with nuclear weapons to an Indian attack. Yesterday Mukherjee lashed out at Pakistan, denying that he had made any such call. NSA’s call to Chinese official for border affairs resolved Ladakh stand-off. Thailand slaps anti-dumping duty on steel imports - Indian Express - Pale Moon. In what could be a blow to Indian steel makers, Thailand has imposed a provisional safeguard duty on import of rolled flat steel products of a certain specification, a major export from India. 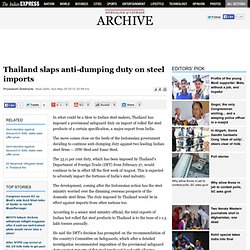 The move comes close on the heels of the Indonesian government deciding to continue anti-dumping duty against two leading Indian steel firms — JSW Steel and Essar Steel. The 33.11 per cent duty, which has been imposed by Thailand's Department of Foreign Trade (DFT) from February 27, would continue to be in effect till the first week of August. This is expected to adversely impact the fortunes of India's steel industry. The development, coming after the Indonesian action has the steel ministry worried over the dimming overseas prospects of the domestic steel firms. Danielle Rajendram (DRajendram) sur Twitter - Pale Moon... India-Italy marines row: 'No legal immunity' for envoy Daniele Mancini - Pale Moon. 18 March 2013Last updated at 09:16 ET Ambassador Daniele Mancini had given his personal assurance that the marines would return on time. 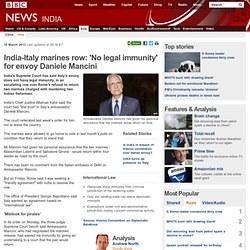 China & India. India, Syria bilateral relations: stepping on the gas - The Fina. Last week’s state visit to India by President Bashar al-Assad of Syria denoted more than just an expression of satisfaction with the deepening of mutual ties. The president wants more of the same. Syria, which is experiencing a fall-off in oil exports, and is indebted internally, received investments in 2006 from India to the tune of $84 million out a total of $800 million.

That was just $16 million short of China’s $100 million, while Iran topped the list. India, therefore, emerged third highest. Even Germany was fourth-ranked, with $24 million, while the EU as a whole put in $155 million. Even then, India’s investments in Syria have mostly been small-scale ones. India, meanwhile, would like Damascus to open up in the new emerging sectors. New Delhi is also eager to step up trade with Syria. Syria would like stepped-up trade with India since the latter is a major oil importer, and petro-exports account for 50% of the Syrian government’s total revenue takings. Manmohan Opposes External Intervention in Syria, Urges NAM to Take Lead. Strongly pitching for coordinated global actions against international terrorism and proliferation of weapons of mass destruction, Prime Minister Manmohan Singh on asked the Non-Aligned Movement to take a lead in this and also take a stand based on “universally accepted principles” on Syria. 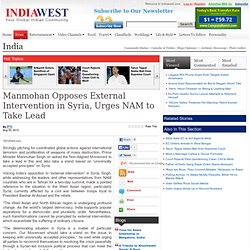 Voicing India’s opposition to “external intervention” in Syria, Singh, while addressing the leaders and other representatives from NAM countries who are in Tehran for a two-day summit, made a pointed reference to the situation in the West Asian region, particularly Syria, currently afflicted by a civil war between troops loyal to President Bashar Al-Assad and the rebels. “The West Asian and North African region is undergoing profound change. As the world’s largest democracy, India supports popular aspirations for a democratic and pluralistic order.

Nevertheless, such transformations cannot be prompted by external intervention, which exacerbate the suffering of ordinary citizens. India, Norway sign social security pact. India and Norway today signed a social security pact that will relieve their workers from double taxation and provide for cooperation in areas of labour market expansion and orderly migration. 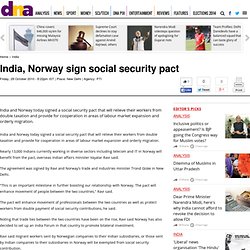 Nearly 13,000 Indians currently working in diverse sectors including telecom and IT in Norway will benefit from the pact, overseas Indian affairs minister Vayalar Ravi said. The agreement was signed by Ravi and Norway's trade and industries minister Trond Giske in New Delhi. "This is an important milestone in further boosting our relationship with Norway. The pact will enhance movement of people between the two countries," Ravi said. Myanmar - India relations. What are India's Interests in Afghanistan? - by Christine Fair. India's profile in Afghanistan has been a quiet but looming concern for New Delhi, Washington, Brussels and of course Islamabad with all wondering what is the optimal role for India in Afghanistan's reconstruction in light of the enduring security competition between India and Pakistan. 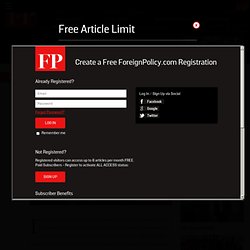 On the one hand are those who want to expand India's presence in Afghanistan through increased Indian training of Afghan civilian and military personnel, development projects, and expanded economic ties. These observers are aware of India's long-standing and robust ties with Kabul and Afghans' generally positive public opinion towards Indians and India. 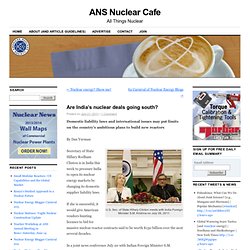 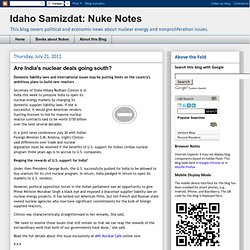 If she is successful, it would give American vendors hunting licenses to bid for massive nuclear reactor contracts said to be worth $150 billion over the next several decades. Polaris » Perceptions, Reality, and U.S.-India Relations. If not even Americans believe their country is the world’s leading economic power today, how can India be expected to work on that assumption? 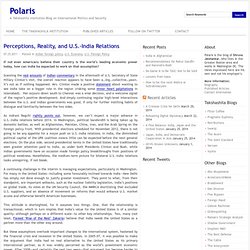 Scanning the vast amounts of Indian commentary in the aftermath of U.S. Secretary of State Hillary Clinton’s visit, the overall reaction appears to have been a…big…collective…yawn. It’s not as if nothing happened. Mrs. Clinton made a positive statement about wanting to see India take on a bigger role in the region (risking some minor heart palpitations in Islamabad). As Indrani Bagchi rightly points out, however, we can’t expect a major advance in U.S. A continuing challenge in the interim is managing expectations, particularly in Washington.

This attitude is shortsighted, for it assumes two things. But these assumptions overlook important changes to the international system, hastened by the financial crisis and recession in the United States. Perhaps. Not aware of China dam on Brahmaputra: India. Gaffe diplomatique. Watch out for Russian wild card in Asia-Pacific. JUST before we were tucking into Christmas turkey and plum pudding, Russian President Dmitry Medvedev met his Indian counterpart Prime Minister Manmohan Singh in New Delhi to reaffirm what the Russian leader called a "privileged partnership" between the two countries. 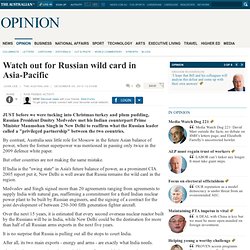 By contrast, Australia sees little role for Moscow in the future Asian balance of power, where the former superpower was mentioned in passing only twice in the 2009 defence white paper. But other countries are not making the same mistake. If India is the "swing state" in Asia's future balance of power, as a prominent CIA 2005 report put it, New Delhi is well aware that Russia remains the wild card in the region. Medvedev and Singh signed more than 20 agreements ranging from agreements to supply India with natural gas, reaffirming a commitment for a third Indian nuclear power plant to be built by Russian engineers, and the signing of a contract for the joint development of between 250-300 fifth generation fighter aircraft.