Tamarind. This article is about the tropical plant. 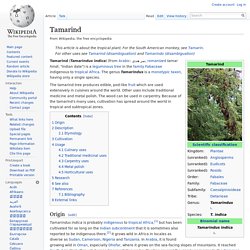 For the South American monkey, see Tamarin. The tamarind tree produces edible, pod-like fruit which are used extensively in cuisines around the world. Other uses include traditional medicine and metal polish. The wood can be used in carpentry. Because of the tamarind's many uses, cultivation has spread around the world in tropical and subtropical zones. Origin[edit] In the 16th century, it was heavily introduced to Mexico, and to a lesser degree to South America, by Spanish and Portuguese colonists, to the degree that it became a staple ingredient in the region's cuisine.[5] Today, India is the largest producer of tamarind.[6] The consumption of tamarind is widespread due to its central role in the cuisines of the Indian subcontinent, South East Asia and America, particularly in Mexico.

Description[edit] The tamarind does flower, though inconspicuously, with red and yellow elongated flowers. The fruit has a fleshy, juicy, acidulous pulp. Curry powder. Ingredients[edit] Most curry powder recipes include coriander, turmeric, cumin, fenugreek, and chili peppers in their blends. 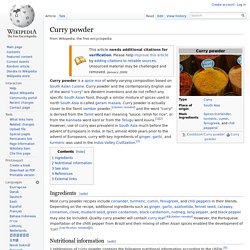 Sambar (dish) Sambar is a lentil based vegetable stew or chowder based on a broth made with tamarind popular in South Indian and Sri Lankan Tamil cuisines adapted in each to its taste and environment. 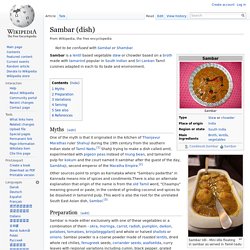 Sambar Idli - Mini idlis floating in sambar as served in Tamil nadu One of the myth is that it originated in the kitchen of Thanjavur Marathas ruler Shahuji during the 19th century from the southern Indian state of Tamil Nadu.[1] Shahji trying to make a dish called amti, experimented with pigeon peas instead of mung bean, and tamarind pulp for kokum and the court named it sambhar after the guest of the day, Sambhaji, second emperor of the Maratha Empire.[2] Other sources point to origin as Karnataka where "Sambaru padartha" in Kannada means mix of spices and condiments.There is also an alternate explanation that origin of the name is from the old Tamil word, "Chaampu" meaning ground or paste, in the context of grinding coconut and spices to be dissolved in tamarind pulp.

Chole Palak (Chickpeas With Spinach) Chickpeas and spinach is a marvelous combination, and Chole Palak is a healthy, protein-rich dish. 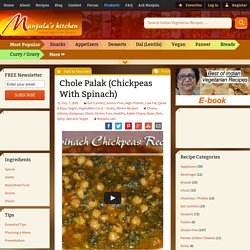 Serving suggestions Chole Palak can be served with roti, naan, or any other bread. Quick Vegan Chana Masala. Good news! 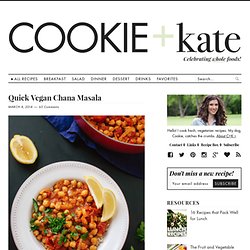 Cookie got her bandage off yesterday. Just a few more long days with the cone around her head. I’m tired of getting herded around by a furry bulldozer! The best news is that the vet said she should be in good shape for our long walks this spring. Sometimes I wonder which of us needs those walks more. I’ve been working non-stop on a website redesign (coming so soon) but I’m pausing to share this recipe, which is from Angela Liddon’s just-released The Oh She Glows Cookbook.

Chana masala is one of my favorite options at Indian buffets. The only significant change I made to this recipe was using a tikka masala spice blend instead of garam masala. I’m loving the recipes I’ve tried from Angela’s new cookbook. Angela kindly offered me a review copy and I know it will be a permanent fixture in my collection. Quick Vegan Chana Masala Author: Cookie and Kate Recipe type: Main Cuisine: Indian Prep time: