List of snack foods from the Indian subcontinent. From Wikipedia, the free encyclopedia This is a list of Indian snack foods. 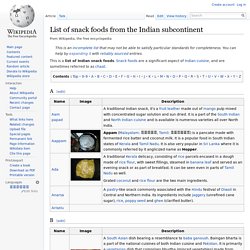 Snack foods are a significant aspect of Indian cuisine, and are sometimes referred to as chaat. A[edit] Indian cuisine. India cuisine or Indian food encompasses a wide variety of regional cuisines native to India. 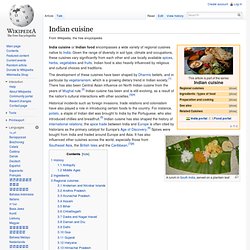 Given the range of diversity in soil type, climate and occupations, these cuisines vary significantly from each other and use locally available spices, herbs, vegetables and fruits. Indian food is also heavily influenced by religious and cultural choices and traditions. The development of these cuisines have been shaped by Dharmic beliefs, and in particular by vegetarianism, which is a growing dietary trend in Indian society.[1] There has also been Central Asian influence on North Indian cuisine from the years of Mughal rule.[2] Indian cuisine has been and is still evolving, as a result of the nation's cultural interactions with other societies.[3][4] Historical incidents such as foreign invasions, trade relations and colonialism have also played a role in introducing certain foods to the country. History[edit] Antiquity[edit] Middle Ages[edit] Ingredients[edit] Indian cuisine. Raita recipes - 18 indian raita recipes or indian raitha varieties.

Indian Cuisine - Step-By-Step Cooking and Recipes. Indian Food - Food In India - Foods Of India. Indian food is different from rest of the world not only in taste but also in cooking methods. 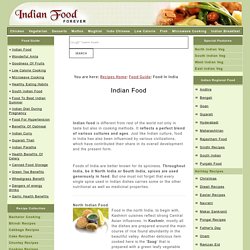 It reflects a perfect blend of various cultures and ages. Just like Indian culture, food in India has also been influenced by various civilizations, which have contributed their share in its overall development and the present form. Foods of India are better known for its spiciness. Throughout India, be it North India or South India, spices are used generously in food.

But one must not forget that every single spice used in Indian dishes carries some or the other nutritional as well as medicinal properties. North Indian Food Food in the north India, to begin with, Kashmiri cuisines reflect strong Central Asian influences. But on the other hand states like the Punjab, Haryana and Uttar Pradesh show high consumption of chapatis as staple food. Cafe Bhonsle, Panjim, Panjim - Burrp. How to make Maharashtrian thalipith- step by step – Of Cloves & Capers. With our busy lifestyles, noone has the tie to make a proper sitdown breakfast. 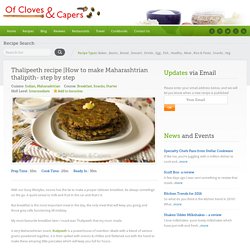 Its always somethign on the go. A quick cereal or milk and fruit in the car and that’s it. But breakfast is the most important meal in the day, the only meal that will keep you going and those grey cells functioning till midday. My most favourite breakfast item / snack was Thalipeeth that my mum made. A very Maharashtrian snack, thalipeeth is a powerhouse of nutrition. Try them. Ingredients Whole Wheat flour- 1 cupJawar Flour- 1/2 cupRice Flour- 1/2 cupBesan/ Chickpea Flour- 1/2 cupOnion, finely chopped- 1/4 cup Coriander powder-2 tsp (optional)Ginger- 1 inchGreen Chillies- 3-4Garam Masala- 1 tsp (optional) Cumin seeds-1 tsp Fresh coriander, finely chopped- 1/2 cupRed Chilli powder (optional)- 1/2 tsp Sesame seeds-2 tbsp Turmeric powder- 1/4 tspSalt- to tasteJaggery- 2 tsp (optional) Method Mix all the ingredients (except oil) together to make a soft pliable dough like so.

Heat a tawa/ skillet. Tips for eating street food in India. Views 0Likes 3Rating 12345 One of the best things about living, working or studying in India is its strong food culture. 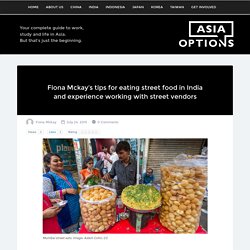 You’ll find different foods in different states and cities. But one thing in common across India is the incredible array of snacks and meals on offer by street vendors around almost every corner. In fact, enjoying the likes of aloo tikki, pav bhaji, mirchi bajji, panni puri or idli sambar from your favourite street stalls is something that unites all Indians. But, the food rules that traveller’s live by – no ice, no water, no salad, and no ice cream – mean that many visitors stay away from the delights of India’s street foods. Working with the National Association of Street Vendors of India I’ve recently been lucky enough to spend some time with the National Association of Street Vendors of India (NASVI), and the association’s street vendors in Delhi and in Patna.

I came to India to complete a research project on hygiene and livelihood with the street vendors.