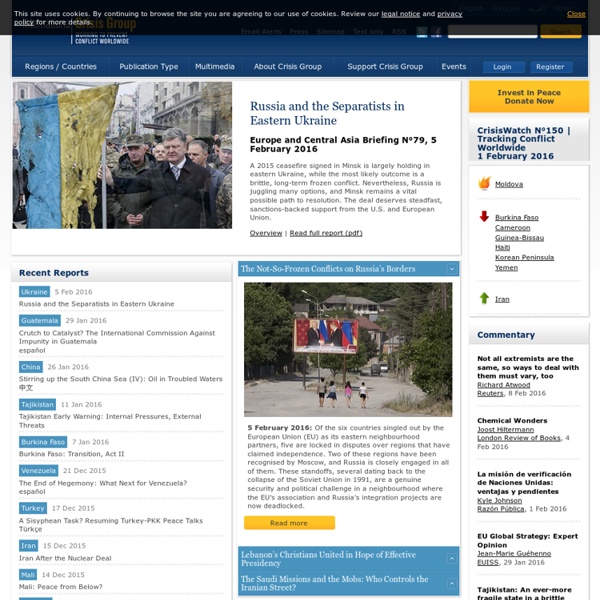 Africa Center for Strategic Studies September 6, 2012 – 7:00 am Please note: The following news items are presented here for informational purposes. The views expressed within them are those of the authors and/or individuals quoted, not those of the Africa Center for Strategic Studies, the National Defense University, or the Department of Defense. Why Mali Matters Mali requests military assistance to free north Kenya readies Somali Kismayo [...]

MEDIA SERVICE America — A Failed State? by Johan Galtung, 7 Apr 2014 - TRANSCEND Media Service Depends, of course, on the criteria. A state has an inside towards its citizens, and an outside toward the state system. Depends on domestic and foreign policy, in other words. ALEC – American Legislative Exchange Council More than 40 years ago, a small group of state legislators and conservative policy advocates met in Chicago to implement a vision: A nonpartisan membership association for conservative state lawmakers who shared a common belief in limited government, free markets, federalism, and individual liberty. Their vision and initiative resulted in the creation of a voluntary membership association for people who believed that government closest to the people was fundamentally more effective, more just, and a better guarantor of freedom than the distant, bloated federal government in Washington, D.C. At that meeting, in September 1973, state legislators, including then Illinois State Rep. Henry Hyde, conservative activist Paul Weyrich, and Lou Barnett, a veteran of then Gov. Ronald Reagan’s 1968 presidential campaign, together with a handful of others, launched the American Legislative Exchange Council.

Bosnia and Herzegovina general election, 2010 Presidential and parliamentary elections were held in Bosnia and Herzegovina on 3 October 2010 for both the Federal government and the two entities.[1] Voters elected 42 deputies to the State House of Representatives.[2] In the Federation of Bosnia and Herzegovina (FBiH), 98 deputies to its House of Representatives, two representatives (one Bosniak, one Croat) to the tripartite state presidency and ten cantonal assemblies were elected.[2] In Republika Srpska (RS), 83 deputies to its National Assembly, the Serb representative of the tripartite state presidency, one RS president and two RS vice-presidents were elected.[2] There were 39 political parties, 11 coalitions, and 13 independent candidates.[3] Background[edit] After the Bosnian War and the Dayton Accords that ended the war, the constitution set out, in Article V, a tripartite rotational presidency between the Bosniak, Croat and Serb entities. Candidates[edit] Presidency[edit]

The Transformation of Political Islam FRANK ANDERSON, president, Middle East Policy Council Good morning, everyone, and thank you for coming. I’m really grateful that you’re here. The subject is important, and I think we’ve prepared a fine collection of real experts to speak about it. I’m Frank Anderson. I’m the president of the Middle East Policy Council. 2012 Global Peace Index « Vision of Humanity through See the latest peace news and research Contact us Press Release: OSCE Chairperson welcomes agreement on new government in BiH Press Release | 29.12.2011 The OSCE Chairperson-in-Office, Lithuanian Foreign Minister Audronius Ažubalis, speaking at the 20th Annual Session of the OSCE Parliamentary Assembly, Belgrade (Frane Maroevic) VILNIUS, 29 December 2011 - The OSCE Chairperson-in-Office, Lithuanian Foreign Minister Audronius Ažubalis, welcomed today the agreement by Bosnia and Herzegovina's politicians to form a new state government. "I congratulate the political leaders on their determination to resolve the political stalemate. It is also very positive that the main focus for the new Council of Ministers will be progress on the country's own EU integration agenda," said Ažubalis. "The OSCE, through one of its largest missions, is ready to support the new leadership in fulfilling its reform agenda, especially when it comes to the country's OSCE commitments.

As estatísticas do governo do Kuwait, definições e fontes. Definitions Administrative divisions: This entry generally gives the numbers, designatory terms, and first-order administrative divisions as approved by the US Board on Geographic Names (BGN). Changes that have been reported but not yet acted on by BGN are noted. Key Policy Institutions and Think Tanks in Peacebuilding and Related Fields Dear Colleagues Over the past two decades, many new institutions from governments, foundations and nonprofits have emerged that provide in-depth policy analysis of current conflicts and the effectiveness of existing responses. In order to stay up to date on current crises, success stories in preventing, managing and transforming conflicts, and larger policy lessons for the field, reading reports from many of these institutions is indispensable. While it is not possible to provide a complete list of all these institutions in the world, I wanted to start off by providing a list of some the key institutions out there. Feel free to suggest additional institutions.

2010–2012 Bosnia and Herzegovina government formation Following the election on 3 October 2010, a process of formation of Bosnia and Herzegovina's Council of Ministers had begun. The resulting election has produced a fragmented political landscape without a coalition of a parliamentary majority more than a year after the election. The centralist Social Democratic Party of Bosnia and Herzegovina, the largest party in the Federation of Bosnia and Herzegovina and the Bosnian Serb autonomist Alliance of Independent Social Democrats, the largest party in the Republika Srpska, each have 8 MPs of the total 42 MPs of the House of Representatives (28 from FB&H and 14 from RS). E-Notes: Understanding the Resilience of Monarchy During the Arab Spring - FPRI Over a year into the Arab Spring, a curious pattern has come to define the revolutionary wave that has swept the Middle East. It is presidents and colonels, not kings and princes, who have proven most vulnerable to social upheaval. Civic unrest forced Zine Abidine Ben Ali in Tunisia to leave the country for exile abroad, while in Egypt mass protests compelled Hosni Mubarak to cede power to military caretakers. In Libya, an armed rebellion with NATO assistance defeated the regime of Muammar Qaddafi, who lost both his office and his life. Milder earthquakes have shaken other presidential regimes, as well: witness Bashar Assad in Syria, whose regime confronts widespread uprisings outside Damascus, and Ali Abdullah Salih in Yemen, who grudgingly acceded to political transition in the context of roiling violence.