Farmers' suicides in India. India is an agrarian country with around 60% of its people depending directly or indirectly upon agriculture. 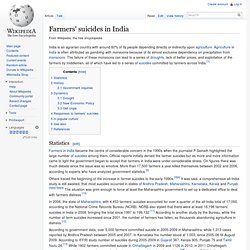 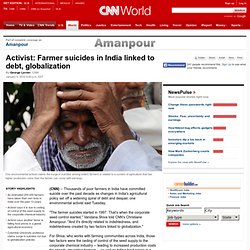 EST One environmental activist claims the surge in suicides among India's farmers is related to a system of agriculture that has higher production costs than the farmer can cover with earnings. India’s Looming Microcredit Crisis. Microfinance schemes were meant to be the saviour of the world’s poor. 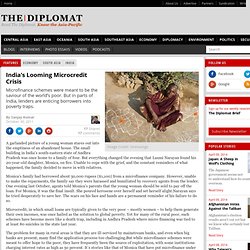 But in parts of India, lenders are enticing borrowers into poverty traps. A garlanded picture of a young woman stares out into the emptiness of an abandoned house. The small building in India’s south-eastern state of Andhra Pradesh was once home to a family of four. But everything changed the evening that Laxmi Narayan found his 20-year-old daughter, Monica, on fire. Unable to cope with the grief, and the constant reminders of what happened, the family decided to move in with relatives. Monica’s family had borrowed about 50,000 rupees ($1,100) from a microfinance company. Microcredit, in which small loans are typically given to the very poor – mostly women – to help them generate their own incomes, was once hailed as the solution to global poverty.

Indian Farmer Suicides: One Every 30 Minutes. IRRI Images If you read TreeHugger, you probably know about the shockingly high suicide rate among farmers in India. 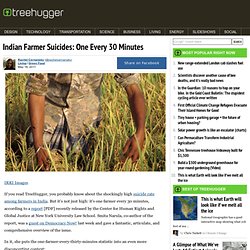 But it's not just high: it's one farmer every 30 minutes, according to a report [PDF] recently released by the Center for Human Rights and Global Justice at New York University Law School. Smita Narula, co-author of the report, was a guest on Democracy Now! Last week and gave a fantastic, articulate, and comprehensive overview of the issue. The GM genocide: Thousands of Indian farmers are committing suicide after using genetically modified crops. By Andrew Malone Updated: 00:48 GMT, 3 November 2008 When Prince Charles claimed thousands of Indian farmers were killing themselves after using GM crops, he was branded a scaremonger. 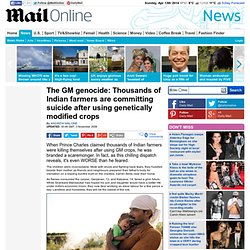 In fact, as this chilling dispatch reveals, it's even WORSE than he feared. The children were inconsolable. Mute with shock and fighting back tears, they huddled beside their mother as friends and neighbours prepared their father's body for cremation on a blazing bonfire built on the cracked, barren fields near their home. Monsanto in India. The Indian Suicides Farmers in India are finding that the "biotechnology revolution" is having a devastating effect on their crop lands and personal debt levels. 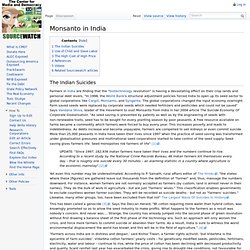 "In 1998, the World Bank's structural adjustment policies forced India to open up its seed sector to global corporations like Cargill, Monsanto, and Syngenta. The global corporations changed the input economy overnight. Farm saved seeds were replaced by corporate seeds which needed fertilizers and pesticides and could not be saved" Says Vandana Shiva, leader of the movement to oust Monsanto from India in her 2004 article The Suicide Economy Of Corporate Globalisation.

"As seed saving is prevented by patents as well as by the engineering of seeds with non-renewable traits, seed has to be bought for every planting season by poor peasants. UPDATE: "Since 1997, 182,936 Indian farmers have taken their lives and the numbers continue to rise. Yet even this number may be underestimated. This has been called a genocide [3]. References. Columns / Sainath : In 16 years, farm suicides cross a quarter million.

Click here to view/download table on Farm Suicides: All India Totals, 1995-2010 It's official. 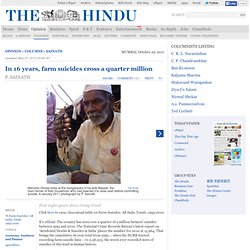 The country has seen over a quarter of a million farmers’ suicides between 1995 and 2010. The National Crime Records Bureau’s latest report on ‘Accidental Deaths & Suicides in India’ places the number for 2010 at 15,964. That brings the cumulative 16-year total from 1995 — when the NCRB started recording farm suicide data — to 2,56,913, the worst-ever recorded wave of suicides of this kind in human history. India: Suicide Rate Among Indian Farmers Soar As They Struggle To Make Ends Meet. By Alex Rossi, India correspondent The record suicide rate among farmers in India continues to rise and is threatening the country's stability and future development, according to campaigners. 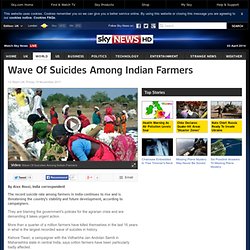 They are blaming the government's policies for the agrarian crisis and are demanding it takes urgent action. More than a quarter of a million farmers have killed themselves in the last 16 years in what is the largest recorded wave of suicides in history. Kishore Tiwari, a campaigner with the Vidharbha Jan Andolan Samiti in Maharashtra state in central India, says cotton farmers have been particularly badly affected. Many of them have only just moved to growing cash crops - like cotton - in the last few years.

He says the farmers have taken on large debts to buy hybrid seeds, which are often unsuited to the harsh and temperamental Indian climate. "They are sold these modern seeds and modern chemicals and have to take on large debts to buy them. "He was always tense" she said. Monsanto Indian Farmer Suicide. Www.thehindu.com/multimedia/archive/00820/Farm_Suicides__All__820602a.pdf.