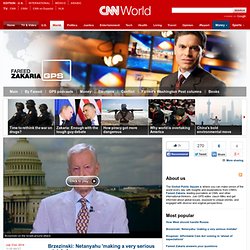 ET on CNN Fareed speaks with former U.S. National Security Advisor Zbigniew Brzezinski about Israel's military operation in Gaza. Israeli minister Tzipi Livni given diplomatic immunity for UK visit. The British government has granted temporary diplomatic immunity to a prominent Israeli politician ahead of a visit to the UK this week to protect her against arrest and potential prosecution for alleged breaches of international law, including war crimes. 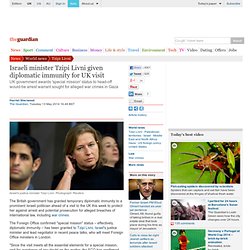 The Foreign Office confirmed "special mission" status – effectively, diplomatic immunity – has been granted to Tzipi Livni, Israel's justice minister and lead negotiator in recent peace talks, who will meet Foreign Office ministers in London. "Since the visit meets all the essential elements for a special mission, and for avoidance of any doubt on the matter, the FCO has confirmed consent to the visit as a special mission," the FCO said. Israeli PM condemns US and UK spying on predecessor as 'unacceptable' The Israeli prime minister Benjamin Netanyahu has broken his silence over revelations that British and US spy agencies had targeted one of his predecessors, condemning the activities as “unacceptable”. 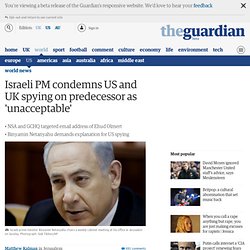 Papers leaked by Edward Snowden, and published by the Guardian on Friday, revealed that GCHQ in association with the National Security Agency had targeted an email address used by the Israeli prime minister when Ehud Olmert was in office. Three further Israeli targets appeared on GCHQ documents, including another email address understood to have been used to send messages between the then Israeli defence minister, Ehud Barak, and his chief of staff, Yoni Koren.

“I have asked for an examination of the matter,” Netanyahu told members of his ruling Likud Party at a meeting of the parliamentary faction in the Knesset on Monday. Israeli warplanes attack shipment of Russian missiles in Syria stronghold. Israeli jets have attacked Russian missiles in Syria, a development that threatens to add another explosive layer to regional tensions. 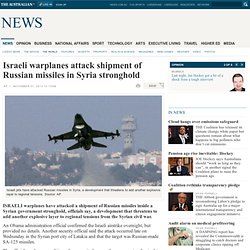 Source: AP ISRAELI warplanes have attacked a shipment of Russian missiles inside a Syrian government stronghold, officials say, a development that threatens to add another explosive layer to regional tensions from the Syrian civil war. An Obama administration official confirmed the Israeli airstrike overnight, but provided no details. Another security official said the attack occurred late on Wednesday in the Syrian port city of Latakia and that the target was Russian-made SA-125 missiles. The officials spoke on condition of anonymity because they were not authorised to publicly discuss the attack. 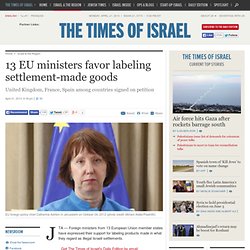 Get The Times of Israel's Daily Edition by email and never miss our top stories Free Sign up! According to a report Friday in El Pais, the Spanish daily, the request was made to Catherine Ashton, the European Union’s foreign policy chief, in a letter co-signed by ministers from Spain, Portugal, France, the United Kingdom, Ireland, Denmark, Finland, the Netherlands, Belgium, Austria, Slovenia, Luxembourg and Malta. 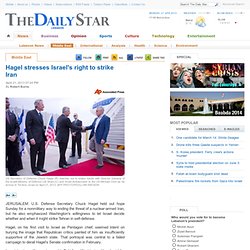 Defense Secretary Chuck Hagel held out hope Sunday for a nonmilitary way to ending the threat of a nuclear-armed Iran, but he also emphasized Washington's willingness to let Israel decide whether and when it might strike Tehran in self-defense. Hagel, on his first visit to Israel as Pentagon chief, seemed intent on burying the image that Republican critics painted of him as insufficiently supportive of the Jewish state. That portrayal was central to a failed campaign to derail Hagel's Senate confirmation in February. In an interview with reporters on his flight from Washington, Hagel said the United States and Israel see "exactly the same" threat from Iran, which he described as a toxic combination of nuclear ambition and support for terrorism.

Obama in Middle East: US and Israel 'share same goals' - Pale Moon. 20 March 2013Last updated at 18:22 ET Video highlights of President Obama's trip to Israel Barack Obama and Israeli PM Benjamin Netanyahu have stressed their shared, tough stance towards Iran, as the US leader makes his first visit to Israel as president. 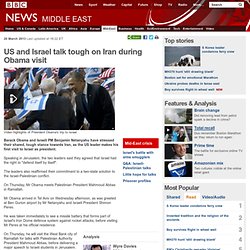 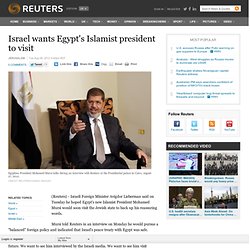 Netanyahu and US Ambassador Clash on Policy Toward Iran. US Secretary of State Hillary Clinton (2nd L) listens to Israel's Prime Minister Benjamin Netanyahu (2nd R) during their meeting in Jerusalem July 16, 2012. 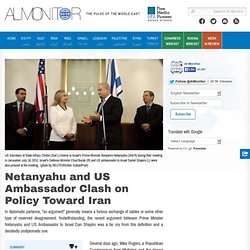 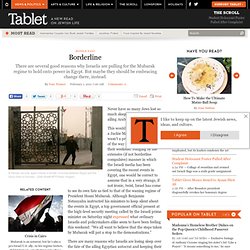 This would be the opening line to a Jackie Mason monologue if it wasn’t a pretty valid description of the way most Israelis spent their weekend. Judging by the extensive (if not borderline compulsive) manner in which the Israeli media has been covering the recent events in Egypt, one would be correct to assume that in a very strange, if not ironic, twist, Israel has come to see its own fate as tied to that of the waning regime of President Hosni Mubarak. L’accord d’échange d’informations « classifiées » entre en vigueur avec Israël. Israel Begins Using WMD Attack Simulator. PrintShareEmailTwitterFacebookLinkedIn Israel yesterday began using a simulation system to help domestic protection commanders prepare for a potential WMD attack, the Jerusalem Post reported today (see GSN, Aug. 19).

Israel cuts ties with UNESCO after holy site classified as 'mosque' Israel approves pullout from Lebanon border village. 17 November 2010Last updated at 15:31 The village of Ghajar falls partly in Lebanon and partly in the occupied Golan Heights Israel's cabinet has approved the withdrawal of its troops from the northern half of a village deemed by the UN to be inside Lebanon. Ghajar is split by the UN blue line, the de-facto border between Lebanon and the Israeli-occupied Golan Heights. Details of the plan will be worked out with UN peacekeepers in the next month, the prime minister's office says. 2009-10-29 - FRANCE-ISRAEL STRATEGIC DIALOGUE COVERS TURKEY, PEACE PROCESS, SYRIA. U.S. Presses Israelis on Renewal of Freeze. Mavi Marmara incident. Turkey - Israël. Shimon Peres denies calling British 'anti-Semites'

Israel’s Nuclear Ambiguity Reconsidered. The Israeli policy of “nuclear opacity” — by which that country’s presumptive nuclear weapons program is not formally acknowledged — is examined in the new book “The Worst-Kept Secret: Israel’s Bargain with the Bomb” by Avner Cohen (Columbia University Press, October 2010). For a variety of reasons, the author concludes that Israel’s “nuclear opacity” is obsolete and will have to be replaced, sooner or later, with a forthright acknowledgment of what everyone already believes to be the case anyway.

Cohen, an Israeli scholar who was trained as a philosopher, provides a lucid account of how nuclear opacity has “worked,” i.e. served Israeli interests, by providing the benefits of deterrence without the negative political and strategic consequences that could ensue from overt disclosure. But its time has passed, he says.