Alberta: How the West was Young - Fur Trade and Mission History - Missionaries in Alberta. Oral traditions, archaeological evidence and early documents all provide clear evidence that spirituality played a vital role in the cultures of the First Nations of western Canada at the time of contact. 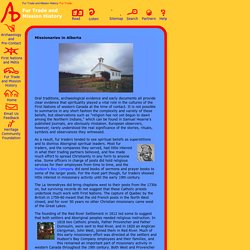 It is not possible to summarize in any short fashion the complexity and variety of these beliefs, but observations such as "religion has not yet begun to dawn among the Northern Indians," which can be found in Samuel Hearne’s published journals, are obviously mistaken. European observers, however, rarely understood the real significance of the stories, rituals, symbols and observances they witnessed. As a result, fur traders tended to see spiritual beliefs as superstitions and to dismiss Aboriginal spiritual leaders. Most fur traders, and the companies they served, had little interest in what their trading partners believed, and few made much effort to spread Christianity in any form to anyone else. ...cont'd. Ethnic Settlement in Alberta: Francophones, P1. The first French-speaking people to come west were Métis traders working for the Hudson’s Bay Company and North West Company. 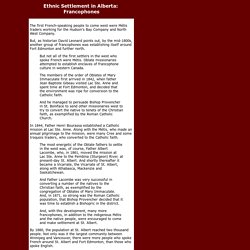 But, as historian David Leonard points out, by the mid-1800s, another group of francophones was establishing itself around Fort Edmonton and further north. But not all of the first settlers in the west who spoke French were Métis. Oblate missionaries attempted to establish enclaves of francophone culture in western Canada. The members of the order of Oblates of Mary Immaculate first arrived in 1842, when father Jean Baptiste Gibeau visited Lac Ste. Anne and spent time at Fort Edmonton, and decided that the environment was ripe for conversion to the Catholic faith.

In 1844, Father Henri Bourassa established a Catholic mission at Lac Ste. Pemmican. Chokeberries (Aronia prunifolia), sometimes added to pemmican Pemmican is a concentrated mixture of fat and protein used as a nutritious food. 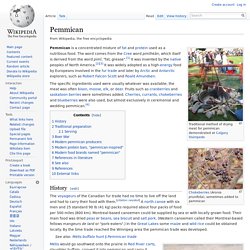 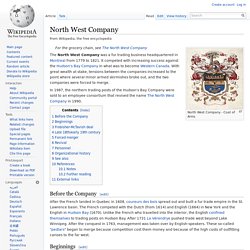 It competed with increasing success against the Hudson's Bay Company in what was to become Western Canada. With great wealth at stake, tensions between the companies increased to the point where several minor armed skirmishes broke out, and the two companies were forced to merge. Hudson's Bay Company - Our History. The Fur Trade Two centuries before Confederation a pair of resourceful Frenchmen named Radisson and des Groseilliers discovered a wealth of fur in the interior of the continent – north and west of the Great Lakes – accessible via the great inland sea that is Hudson Bay. 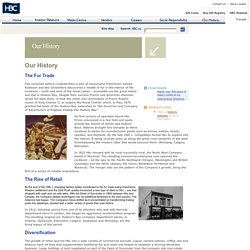 Despite their success French and American interests would not back them. HBC Point Blanket. Coureur de bois - Simple English Wikipedia, the free encyclopedia. Hudson Bay company freight canoe with voyageurs A coureur des bois (French pronunciation: [kuʁœʁ de bwa], runner of the woods) was a French Canadian man who engaged in the fur trade. 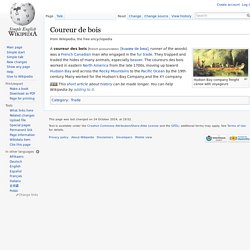 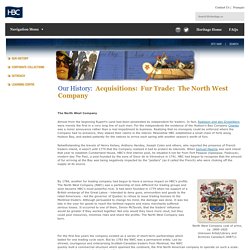 In fact, Radisson and des Groseilliers were merely the first in a very long line of such men. For the independents the existence of the Hudson's Bay Company Charter was a minor annoyance rather than a real impediment to business. Realizing that no monopoly could be enforced where the Company had no presence, they staked their claims in the interior. Notwithstanding the travels of Henry Kelsey, Anthony Henday, Joseph Colen and others, who reported the presence of French traders inland, it wasn't until 1774 that the Company realized it had to protect its interests. 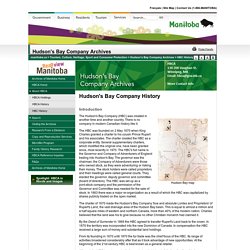 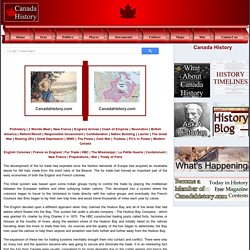 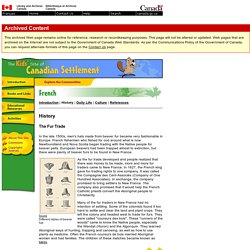 French fishermen who fished for cod around what is now Newfoundland and Nova Scotia began trading with the Native people for beaver pelts. European beavers had been trapped almost to extinction, but there were plenty of beaver furs to be found in New France. As the fur trade developed and people realized that there was money to be made, more and more fur traders came to New France. Fur Trade. For nearly 250 years, from the early 17th to the mid-19th centuries, the fur trade was a vast commercial enterprise across the wild, forested expanse of what is now Canada. Beaver Hats Beaver hats were a fashionable item in 18th and 19th century Europe. ABORIGINAL PEOPLES. Fur Traders Shortly after Europeans began sailing to Canada to explore and to fish, they found out that Canada was a land with many fur-bearing animals.

When explorers and fishers began trading with Aboriginal Peoples for fresh food, they learned that the Aboriginal Peoples had furs from the animals they hunted. The fur trade in Canada began because many Europeans wanted these furs. Both the French and the English used furs, especially beaver fur, to make hats and to trim other clothing.

The Beginnings of the Fur Trade. Europeans traveling in the wilds had to create alliances with First Nations people who knew and controlled the waterways and transportation routes. The coureurs-des-bois needed Indian women to cook, prepare their food supplies for winter, make and repair their clothes, heal their wounds, and especially to make their moccasins and snowshoes, which were essential for travel. Some of these relationships developed into families. The children of these unions, between French Canadians and their First Nations wives, would eventually become the Métis Nation of Canada. Métis comes from a French word meaning mixed. Sometimes the country wives stayed behind with the kids, while the voyageur returned home to Quebec, to return the next summer.

The Hudson's Bay Company saw this 'mixing' as bad for morals, while the North West Company saw it as good for business. But fur trade post chiefs from both companies took Indian wives, like those in Victoria, BC, Fort Edmonton, Winnipeg, and York Factory. Exploration, the Fur Trade and Hudson's Bay Company - Timeline. Fur Trade Nation. Saskatchewan Stories, The Fur Trade. Untitled. Fur_trade. Alberta: How the West was Young - Fur Trade and Misison History - Fur Trade Rivalries. The Fur Trade - Opening the West. Father Lacombe Chapel.

Fort Edmonton is a large compact establishment with good buildings, palisades, and bastions, pleasantly situated in a deep valley. The Fur Trade: Our People's story. Canada Vignettes - Trading Post. 1830 Beaver Trapping with Francois of the HBC.