Under the Hood VI

Under the Hood VII 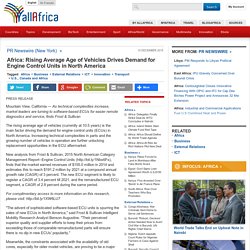 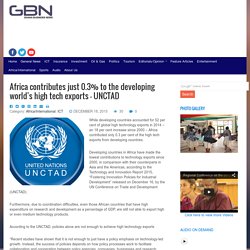 Developing countries in Africa have made the lowest contributions to technology exports since 2000, in comparison with their counterparts in Asia and the Americas, according to the Technology and Innovation Report 2015, “Fostering Innovation Policies for Industrial Development” released on December 16, by the UN Conference on Trade and Development (UNCTAD). Furthermore, due to coordination difficulties, even those African countries that have high expenditure on research and development as a percentage of GDP, are still not able to export high or even medium technology products. According to the UNCTAD, policies alone are not enough to achieve high technology exports “Recent studies have shown that it is not enough to just have a policy emphasis on technology-led growth. Africa's future is urban, but someone has to pay for it - where will the money come from? 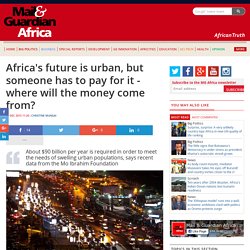 Two cities in Mozambique emerged as the continent’s centers for highest growth potential, and African cities with medium to high growth potential are all located in Eastern and Western Africa. The index noted that one of the greatest barriers to African cities’ economic expansion is the low level of internal trade within the continent. But it is just one of the many headaches the continent’s cities have to contend with. In Yaonde, Cameroon, city authorities were going through a familiar challenge for African cities – greater responsibility thrust on them, as the emphasis on governance shifts towards decantralisation, but the central government retaining a tight grip on finances. The unlikely nations topping race to grow rich from resources - Madagascar, Tanzania are stars, and Nigeria, Seychelles flop. AS the continent marked “African Industrialisation Day” on November 20, a major reason offered for its failure to rapidly shift millions out of poverty continues to be its role as an exporter of raw materials or unprocessed resources, only to spend the cash earned importing the finished product at a much higher price. 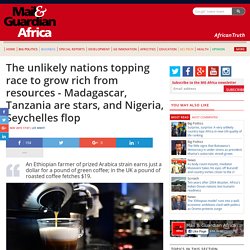 The failure to value add—enhance a product to earn more from it— is usually put down to a lack of processing facilities and infrastructure, meaning the region is bulking up others’ economies, only this time with its own consent. The costs are enormous: A cup of coffee in Kenya for example retails anywhere between $3-$5, prices comparable to those in Europe, despite the country exporting nearly half of its harvested green coffee. An Ethiopian farmer producing the prized Arabica strain earns just a dollar for a pound of green coffee; in the UK a pound of roasted coffee fetches $19. Surprise, surprise: A very unlikely country tops Africa in new UN quality of life ranking.

MAURITIUS and Seychelles retained their positions as the countries with the highest quality of life in Africa, but in the five years to 2014, Zimbabwe chalked up the fastest average growth in human development, a new UN study shows. 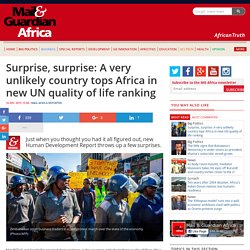 The 2015 Human Development Report released Monday also confirmed that Ethiopia and Rwanda, seen as the continent’s foremost developmental states, have also rapidly raised the living conditions of their nationals between 2010-2014, even as it threw up some more surprises. In the same five-year period, Zimbabwe - seen largely as a basket case in recent years - had the highest change on the Human Development Index (HDI) ranking on the continent, a 12-place jump, ahead of the Seychelles, Cameroon and Mauritius, data from the report showed. In its similar index last year, the United Nations Development Programme (UNDP) had showed that Zimbabwe, which has been beset by political divisions that have hurt its economy, had made some notable gains.

Africa: Surprise Win for Africa As It Gains Greater Market Access Globally. By Christabel Ligami Nairobi — Africa scored a surprise win at the World Trade Organisation meeting in Nairobi with resolutions that will give the continent enlarged access to markets in both the developing and developed countries. 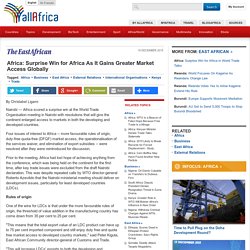 Four issues of interest to Africa -- more favourable rules of origin, duty-free quota-free (DFQF) market access, the operationalisation of the services waiver, and elimination of export subsidies -- were resolved after they were reintroduced for discussion. Prior to the meeting, Africa had lost hope of achieving anything from the conference, which was being held on the continent for the first time, after key trade issues were excluded from the draft Nairobi declaration. This was despite repeated calls by WTO director-general Roberto Azevêdo that the Nairobi ministerial meeting should deliver on development issues, particularly for least developed countries (LDCs). Rules of origin Export subsidies. Top Five Elections To Watch In Africa And Predictions For 2016. Samia Nkrumah, center, is chairwoman of Ghana's Convention People’s Party and a possible presidential candidate in 2016. 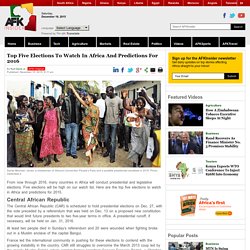 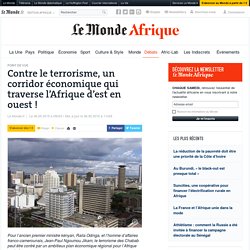 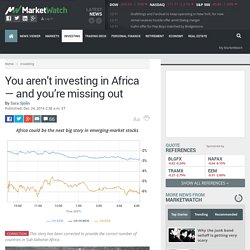 Bloomberg LONDON (MarketWatch) — If a financial adviser offered her clients a chance to invest in a country that expected economic growth of 6% or 7% a year for the next two decades, chances are the clients would jump at the prospect. But once they found out that country was in sub-Saharan Africa, chances are a lot of them would lose their nerve. With the Ebola virus ravaging the populations and economies of several West African countries, and armed conflicts claiming lives in Nigeria, Kenya and other nations, Africa continually generates the kind of headlines that make Westerners uneasy. SUNDAY TIMES - How Africa skipped an industrial milestone. A country would traditionally start as an agrarian economy and progress to an industrial one, then mature into a services-led economy. 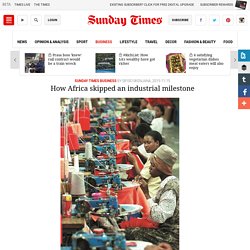 Many African countries, however, did not follow this path - a big part of the industrialisation phase was missed in the quest to compete on a global scale. In fact, sub-Saharan Africa has on aggregate been deindustrialising over the past 15 years. This is evident from the decrease in the share of manufacturing and industry in total output. Two economic theories underpin the effect of globalisation on the short-lived industrialisation process, and subsequent deindustrialisation: the Kuznets curve, and comparative advantage in international trade economics. A country has comparative advantage when it can produce a product at a lower cost than its trading partners can.

Industrialisation is closely linked to infrastructure development and job creation and has been identified as a precondition for Africa to achieve inclusive economic growth. Raw materials: Africa ‘pushing to curb exports’ #Focac: Pretoria - African countries will use the Forum on China-Africa Co-operation (Focac) to explore ways to diminish the trade imbalance currently tilted in China’s favour, Trade and Industry Minister Rob Davies said on Thursday. “The continent is really united in saying we really need to build a new basis for trade with China if we are going to reduce the quantitative inequalities. To grow the trade, we got to move from beyond just supplying raw materials, into us also supplying some value added products,” Davies told African News Agency at the Focac ministerial meeting in Pretoria. Africa's business tycoons highly corrupt, Transparency says. Image copyright Eye Wire Business executives are the most corrupt group in Africa after police officers, a new survey indicates.

This is the first time its annual survey ranked businessmen as highly corrupt, Transparency International said. Abuses of power increase poverty and deprive people of basic needs, the anti-corruption watchdog warned. Poor people were hardest hit as they were almost twice as likely to pay a bribe compared with the more affluent. More than people 43,000 were interviewed in 28 states in sub-Saharan Africa for the People and Corruption: African Survey 2015.

Africa’s soaring demand for energy creates oil storage opportunities for investors. Africa’s soaring demand for energy creates oil storage opportunities for investors Updated Tuesday, December 1st 2015 10:20am Africa’s annual appetite for gasoil and gasoline is expected to climb by as much as 8%, while demand for liquefied petroleum gas (LPG) has hit double digits. The continent’s growing home-grown energy supply will help satisfy some of the burgeoning demand. Africa's Booming Retail Sector Set to Attain China's Lofty Standards. By Gift Ndolwane Johannesburg — THE continent's retail industry is earmarked for a boom, such as one experienced by current economic powerhouse China in the late 1980s, on the back of a rapidly increasing population and significant investments in the sector. The comparison with the Asian country has earned Africa the tag of the 'next big story" in the foreseeable future, similar to China's meteoric rise to current trends of yesteryear retailers are expanding four to five times faster than retailers in the United States and Europe.

Lesser known African cities from four corners of the continent remind us why they shouldn't be overlooked. LIKE many other parts of the world, Africa’s capital cities are hogging the limelight. They draw in international visitors and investments, whilst local governments and cities - which are key agents of change and transformation in their own right - watch from the sidelines. ‘Military Inc’: African armies are big players in economies— with Ethiopia, Egypt top of the list. UGANDA’S army has announced a tie-up with a Chinese company to make explosives, which would then be sold both locally and to the East African country’s neighbours. How Africa’s 1bn+ population will transform telecoms sector. By Myolisi Sikupela: Staff Reporter on 18 November, 2015 3. How will new technology transform Africa? [AfricaCom] By Stuart Thomas: Senior Reporter on 17 November, 2015. Forget ‘Africa Rising’ - Take A Deeper Look - GE Reports Sub-Saharan Africa.

By Simon Freemantle, Senior Political Economist, Standard Bank Here are five elements investors should examine to assess whether growth across African markets is sustainable. There are clear limitations to the idea of a single and definable story behind Africa’s recent economic and political momentum. How Digital Technology is Transforming African Agriculture. Africa is growing fast—and yet it’s still wildly uncompetitive. Fearing for the life of her unborn child, Faatma had begged her husband, Mohamed, to flee the civil war unraveling their country.