Windows 7 tweaks: 3 Registry edits to speed performance. This article is excerpted from the book Microsoft Windows 7 Your Way: Speed Up and Customize Windows from Que Publishing. 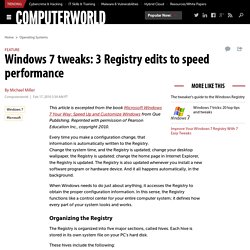 Organizing the Registry The Registry is organized into five major sections, called hives. These hives include the following: HKEY_CLASSES_ROOT. The settings or data for each individual key or subkey is called the value. Collection of Best Registry Tweaks to Speed Up Your Windows. We here at AskVG always try our best to share useful Registry tweaks and tips to make your Windows faster and user friendly. 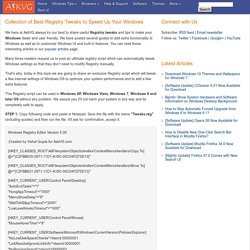 Speed Up Win7 With Simple Registry Edit (Hack) Want a little more speed out of Win7? 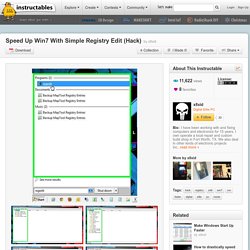 As a first start you should always clean up your system first. Most slow down comes from junk files and full registries. 6 Registry Hacks to Make Your PC Faster. The Windows Registry is a database that holds your operating system's configurations and settings. 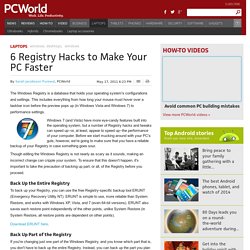 This includes everything from how long your mouse must hover over a taskbar icon before the preview pops up (in Windows Vista and Windows 7) to performance settings. Windows 7 (and Vista) have more eye-candy features built into the operating system, but a number of Registry hacks and tweaks can speed up--or, at least, appear to speed up--the performance of your computer. Before we start mucking around with your PC's guts, however, we're going to make sure that you have a reliable backup of your Registry in case something goes sour. Though editing the Windows Registry is not nearly as scary as it sounds, making an incorrect change can cripple your system. To ensure that this doesn't happen, it's important to take the precaution of backing up part, or all, of the Registry before you proceed.

Registry Tweaks for Windows 7 Performance Boost. Whatever a user commands, it is fulfilled through the registry edits. 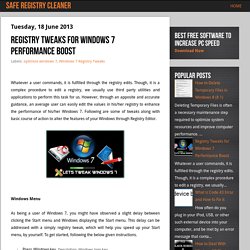 Though, it is a complex procedure to edit a registry, we usually use third party utilities and applications to perform this task for us. However, through an apposite and accurate guidance, an average user can easily edit the values in his/her registry to enhance the performance of his/her Windows 7. Following are some of tweaks along with basic course of action to alter the features of your Windows through Registry Editor. Windows Menu As being a user of Windows 7, you might have observed a slight delay between clicking the Start menu and Windows displaying the Start menu. . · Press Windows key · Type ‘regedit’ and press Enter to open Registry Editor · Navigate to the Desktop key, following the path cited beneath HKEY_CURRENT_USER\Control Panel\Desktop · Click on the Desktop key and locate the value MenuShowDelay in the rightmost pane.

The 50 Best Registry Hacks that Make Windows Better. We’re big fans of hacking the Windows Registry around here, and we’ve got one of the biggest collections of registry hacks you’ll find. 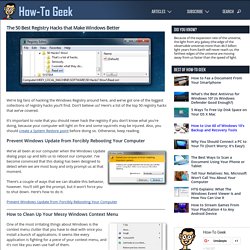 Don’t believe us? Here’s a list of the top 50 registry hacks that we’ve covered. It’s important to note that you should never hack the registry if you don’t know what you’re doing, because your computer will light on fire and some squirrels may be injured. Also, you should create a System Restore point before doing so. 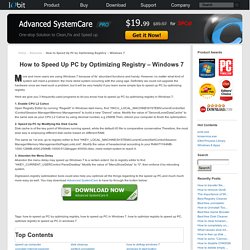 However, no matter what kind of system will meet a problem: the more stolid system occurring with the using age. Definitely we could not upgrade the hardware once we meet such a problem, but it will be very helpful if you learn some simple tips to speed up PC by optimizing registry. Here we give you 3 frequently-used programs to let you know how to speed up PC by optimizing registry in Windows 7: 1. 2. The same as 1st one, go to registry editor to find “HKEY_LOCAL_MACHINE\SYSTEM\CurrentControlSet\Control\Session Manager\Memory Management\IoPageLockLimit”, Modify the value of hexadecimal according to your RAM.FYI:64MB-1000;128MB-4000;256MB-10000;512&bigger-40000).Also, need restart system to reach it. 3. 10 Windows 7 Registry hacks and tweaks.

Windows 7 needs far less of the sleeves-up shuffling about that its predecessors demanded for smooth operation. 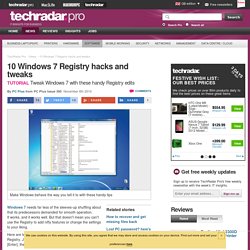 It works, and it works well. But that doesn't mean you can't use the Registry to add nifty features or change the settings to your liking. Here are ten things you can do with the Windows 7 Registry. Just type regedit in the usual search box and hit [Enter], then follow our tips. 1. Bought your PC from an overzealous manufacturer that's gratuitously branded Internet Explorer with its own name? In the registry editor, navigate to 'HKEY_CURRENT_ USER\Software\Microsoft\ Internet Explorer\Main' and create a new string value. 2. Top 10 Registry Tweaks that Power Up Windows.