Nuremberg Trials. YIVO Digital Archive on Jewish Life in Poland. GHDI - Section. Roman Vishniac Archive. German History in Documents and Images. Kristallnacht: The Night That Changed Germany Forever and Signalled the Start of the Holocaust. Kristallnacht, or the Night of the Broken Glass, was a pogrom against Jewish people in Nazi Germany, on 9-10 November 1938. 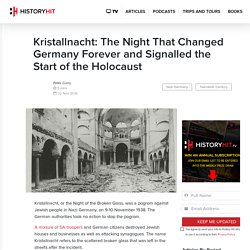 The German authorities took no action to stop the pogrom. A mixture of SA troopers and German citizens destroyed Jewish houses and businesses as well as attacking synagogues. Holocaust Poster Art. Two Objects That Illustrate the Horrors of Nazi Oppression. This article is an edited transcript of The Third Reich in 100 Objects with Roger Moorhouse on Dan Snow’s History Hit, first broadcast 20 November 2017. 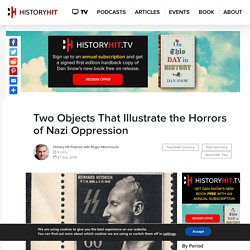 You can listen to the full episode below or to the full podcast for free on Acast. Reinhard Heydrich stamp. Lebensraum: Policy or Rhetoric? When the Germans talked of Lebensraum, or ‘living space’, they used the term to denote a perceived need to have enough physical room to provide for themselves comfortably. 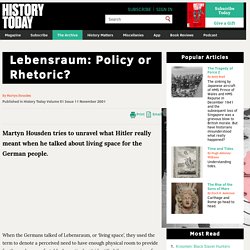 In particular, it identified the possession of enough land to feed a population large enough to ensure Germany a place on the world stage. Hitler did not just start talking about the need to conquer Lebensraum in 1941; its origins lay much further back than even 1939. Anti-Nazi newspaper columnists (for example in Der Deutsche in Polen) observed during the late 1930s that Hitler’s foreign policy involved something more than just planless initiatives, improvisation and contradictory imperatives. They said that its main direction had been well-established during the mid-1920s. The second volume of Mein Kampf, published in December 1926, contained a chapter entitled ‘Eastern Orientation and Eastern Policy’. Where could Hitler’s country expand? What was to be done? The Weimar Republic Timeline. On March 13, 1920, the Erhardt Brigade, a rebellious military unit, marched into Berlin as part of the first serious rightist attempt to destroy the Republic and seize power. 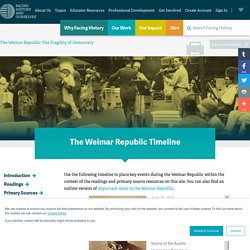 This brigade, a Freikorps unit that had fought in the Baltic under Captain Hermann Erhardt, had refused orders to demobilize. It was greeted in Berlin by the civil servant Wolfang Kapp and General Walther Luttwitz who proclaimed a new government of national unity. The Social Democratic leadership proved unable to get regular military units to engage the Erhardt Brigade. Although General Walther Reinhardt, the Prussian Minister of Defense, was willing to use troops against the rebels, most troops took their cue from General von Seeckt, the Army Chief of Staff, who told the Social Democratic leaders that troops would not fire on other troops. President Friedrich Ebert and his cabinet fled to Dresden and then to Stuttgart where they called on their supporters to stage a general strike. Who Voted for the Nazis? Campaigners at a polling station in BerlinBetween 1928 and 1932, the National Socialist German Workers Party (NSDAP) became the most popular of Germany's many political organisations. 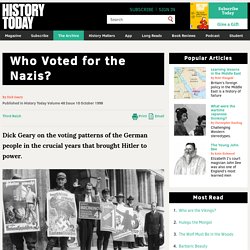 It had won no more than 2.6 per cent of votes cast in the Reichstag election of 1928 but just two years later registered massive gains, winning 18.3 per cent of the popular vote. Untitled Document. Introduction Where do we get our politics from? 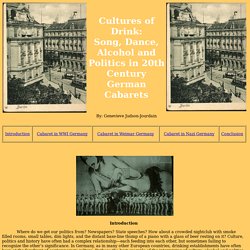 Newspapers? State speeches? How about a crowded nightclub with smoke filled rooms, small tables, dim lights, and the distant base-line thump of a piano with a glass of beer resting on it? Culture, politics and history have often had a complex relationship—each feeding into each other, but sometimes failing to recognize the other’s significance. Cabarets served a special role as an outlet for political discourse, but in the end, they catered to public tastes and had to strike an appropriate balance between mindless entertainment and engaging political commentary. Cabaret during World War I: 1914-1919. German Propaganda Archive (Guide Page) Nazi and East German Propaganda Guide Page Propaganda was central to Nazi Germany and the German Democratic Republic. 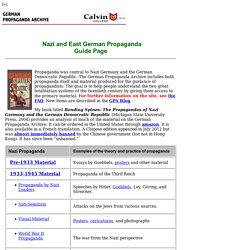 The German Propaganda Archive includes both propaganda itself and material produced for the guidance of propagandists. The goal is to help people understand the two great totalitarian systems of the twentieth century by giving them access to the primary material. For further information on the site, see the FAQ. GHDI - Document - Chapter. X. 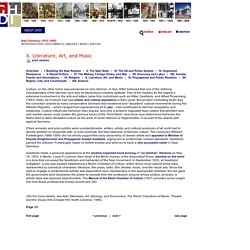 Literature, Art, and Music print version Overview | I. Music in the Third Reich. Music Approved of by the Third Reich. Under the Nazi regime, all music produced had to fit within certain standards defined as "good" German music. 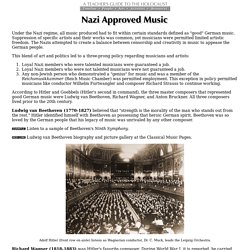 Suppression of specific artists and their works was common, yet musicians were permitted limited artistic freedom. The Nazis attempted to create a balance between censorship and creativity in music to appease the German people. This blend of art and politics led to a three-prong policy regarding musicians and artists: Loyal Nazi members who were talented musicians were guaranteed a job. Loyal Nazi members who were not talented musicians were not guaranteed a job. Any non-Jewish person who demonstrated a "genius" for music and was a member of the Reichsmusikkammer (Reich Music Chamber) was permitted employment. Adolf Hitler (front row on aisle) listens as Wagnerian conductor, Dr. Degenerate Art. The years 1927-37 were critical for artists in Germany. 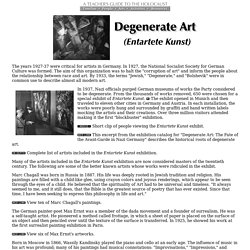 In 1927, the National Socialist Society for German Culture was formed. The aim of this organization was to halt the "corruption of art" and inform the people about the relationship between race and art. By 1933, the terms "Jewish," "Degenerate," and "Bolshevik" were in common use to describe almost all modern art. In 1937, Nazi officials purged German museums of works the Party considered to be degenerate. Culture in the Third Reich: Overview. The "Synchronization" of Culture In 1933, Nazi Minister for Popular Enlightenment and Propaganda Joseph Goebbels began the synchronization of culture, by which the arts were brought in line with Nazi goals.

The government purged cultural organizations of Jews and others alleged to be politically or artistically suspect. The works of leading German writers such as Bertolt Brecht, Lion Feuchtwanger, and Alfred Kerr were consigned to flames in a book burning ceremony in Berlin. Hitler Youth. Kurt Gruber formed the first group of young members of the National Socialist German Workers Party (NSDAP) in 1926. Rudolf Hess suggested the name of the Hitler Youth (Hitler Jugend) and later that year transferred the leadership of the movement to Franz Pfeffer von Salomon of the Sturm Abteilung (SA). Pfeffer's main intention was to train young men to fight against members of left-wing youth groups. (1) The Hitler Youth www.HolocaustResearchProject.org.

The Hitler Youth Jungsturm Adolf Hitler In 1920, Adolf Hitler, authorized the formation of a Youth League of the National Socialist Workers' Party (NSDAP) based upon the principles of an earlier German youth group known as as the Wandervögel. The Wandervögel (translated as "Migratory Bird") were the German equivalent of the Boy Scouts of America and the World Organization of the Scout Movement. Wandervögel members had an idealistic, romantic notion of the past, yearning for simpler days when people lived off the land.

Wandervögel members distinguished themselves by wearing shorts and hiking boots rather than the starched shirts and creased trousers of the middle class. This new Nazi Youth League attracted very few members at first, competing against numerous other well-established youth groups, and following the failed Munich Beer Hall Putsch and Hitler's arrest, the Youth League of the NSDAP had been outlawed. Hitler's SS: Private Army of the Third Reich. This article appears in the March 31, 2006 issue of Executive Intelligence Review. Hitler's SS: Private Army Of the Third Reich by Steve Douglas The blackshirted SS (Defense Detachment) of Heinrich Himmler, which fulfilled certain "defense" and intelligence/security functions in and for Adolf Hitler's Nazi Party, numbered only around 10,000 members until 1932, the year before Hitler's installation as Chancellor.

"Weimar Culture and the Rise of National Socialism: The <i>Kampfbund fü" by Alan E. Steinweis. Abstract. Hitler's Failed Coup - The Beer Hall Putsch. Ten years before Adolf Hitler came to power in Germany, he tried to take power by force during the Beer Hall Putsch. On the night of November 8, 1923, Hitler and some of his Nazi confederates stormed into a Munich beer hall and attempted to force the triumvirate, the three men that governed Bavaria, to join him in a national revolution. History - World Wars: The Rise of Adolf Hitler. Aggression as a Basic Nazi Idea: Mein Kampf. [Page 644] Full text of "Mein Kampf"