Untitled. In last decades, Germany has forgotten how to be a startup country. 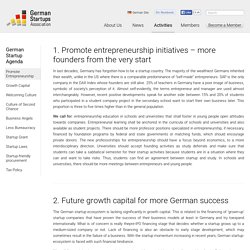 The majority of the wealthiest Germans inherited their wealth, unlike in the US where there is a comparable predominance of “self-made” entrepreneurs. SAP is the only company in the DAX Index whose founders are still alive. 25% of teachers in Germany have a poor image of business, symbolic of society’s perception of it. Almost self-evidently, the terms entrepreneur and manager are used almost interchangeably. However, recent positive developments speak for another side: between 15% and 20% of students who participated in a student company project in the secondary school want to start their own business later.

This proportion is three to five times higher than in the general population. We call for: entrepreneurship education in schools and universities that shall foster in young people open attitudes towards companies. 2. The German startup ecosystem is lacking significantly in growth capital. 3. 4. 5. 6. 7. 8. 9. 10. The Founder Institute: Helping Founders to Build Great Companies. Founders’ Pack. In addition to the investment from Seedcamp, we offer our teams a unique Founders’ Pack. 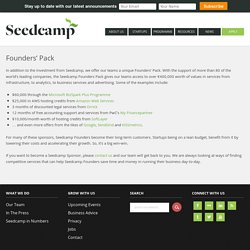 With the support of more than 80 of the world’s leading companies, the Seedcamp Founders Pack gives our teams access to over €400,000 worth of values in services from infrastructure, to analytics, to business services and advertising. Some of the examples include: $60,000 through the Microsoft BizSpark Plus Programme $25,000 in AWS hosting credits from Amazon Web Services3 months of discounted legal services from Orrick12 months of free accounting support and services from PwC’s My Financepartner$10,000/month worth of hosting credits from SoftLayer… and even more offers from the likes of Google, SendGrid and KISSmetrics. For many of these sponsors, Seedcamp Founders become their long-term customers. Startups being on a lean budget, benefit from it by lowering their costs and accelerating their growth. If you want to become a Seedcamp Sponsor, please contact us and our team will get back to you. Europe's top startup countries: the good, the bad and the ugly. (Editor’s note: this article was written by Tech.eu in connection with a partnership with the upcoming Le Web conference in Paris, and was cross-posted on their blog.) 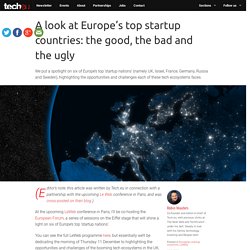 At the upcoming LeWeb conference in Paris, I’ll be co-hosting the European Forum, a series of sessions on the Eiffel stage that will shine a light on six of Europe’s top ‘startup nations’. You can see the full LeWeb programme here, but essentially we’ll be dedicating the morning of Thursday 11 December to highlighting the opportunities and challenges of the booming tech ecosystems in the UK, Israel, Germany, France, Russia and Sweden.

In the lead-up to the event, I wanted to focus attention on some of the specifics of said ecosystems, and categorise them under ‘the good, the bad and the ugly’. It’s important to note that this is a mix of facts and opinions based on my own observations, alongside feedback from a good number of local industry insiders. You’re free to disagree; in fact, the comment floor is all yours. Israel. Business and start-up entrepreneurs from third countries. If an entrepreneur from a non-EU country (so-called third country) wishes to start up a business in Germany or wants to open a regional branch of a company here in Berlin, he/she needs to obtain a residence permit, authorising them to engage in such work. 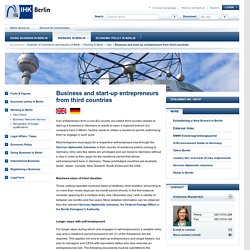 Most foreigners must apply for a respective self-employed visa through the German diplomatic missions in their country of residence before coming to Germany. Only very few states are privileged and can travel to Germany without a visa in order to then apply for the residence permit that allows self-employment here in Germany. These priviledged countries are Australia, Israel, Japan, Canada, New Zealand, South Korea and the USA. Business stays of short duration Those making repeated business stays of relatively short duration amounting to no more than ninety days per six-month period should, in the first instance, consider applying for a multiple-entry visa (‘Business visa’) with a validity of between six months and five years.