Instagram Sells For $1 Billion, Despite No Revenue. The technology world is abuzz over Facebook's $1 billion deal to acquire the photo-sharing app Instagram. 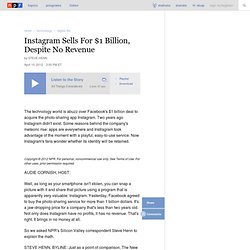 Two years ago Instagram didn't exist. Some reasons behind the company's meteoric rise: apps are everywhere and Instragram took advantage of the moment with a playful, easy-to-use service. Now Instagram's fans wonder whether its identity will be retained. Copyright © 2012 NPR. For personal, noncommercial use only. Well, as long as your smartphone isn't stolen, you can snap a picture with it and share that picture using a program that is apparently very valuable: Instagram. So we asked NPR's Silicon Valley correspondent Steve Henn to explain the math. STEVE HENN, BYLINE: Just as a point of comparison, The New York Times was founded in 1851.

JOSH BERNOFF: The argument that they're doing is just to keep it out of the hands of Twitter, where it could be actually quite useful. HENN: That's Josh Bernoff. Picture this: Instagram could be worth $35 billion. Pinterest valuation: Worth billions, no revenue. Photo by Steve Jennings/Getty Images for The Crunchies Matthew Yglesias is on vacation. 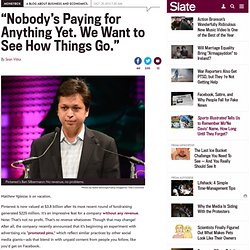 Pinterest is now valued at $3.8 billion after its most recent round of fundraising generated $225 million. Pinterest Raises More Money, Fetching a Valuation of $5 Billion. Photo The business of online scrapbooking is getting more valuable — at least in the eyes of investors. 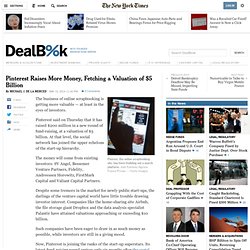 Pinterest said on Thursday that it has raised $200 million in a new round of fund-raising, at a valuation of $5 billion. At that level, the social network has joined the upper echelons of the start-up hierarchy. The money will come from existing investors: SV Angel, Bessemer Venture Partners, Fidelity, Andreessen Horowitz, FirstMark Capital and Valiant Capital Partners. Despite some tremors in the market for newly public start-ups, the darlings of the venture capital world have little trouble drawing investor interest. Such companies have been eager to draw in as much money as possible, while investors are still in a giving mood. Now, Pinterest is joining the ranks of the start-up superstars. Snapchat Doesn’t Make Any Money, So Why Is It Worth So Much? Nov 14, 2013 1:22pm The founders of Snapchat, a mobile app that lets mostly teenagers send mostly naked pictures of themselves, were recently offered $3 billion for the company, only to turn it down. 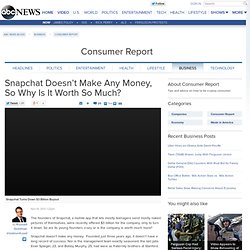 So are its young founders crazy or is the company is worth much more? Snapchat doesn’t make any money. Founded just three years ago, it doesn’t have a long record of success. Nor is the management team exactly seasoned; the last jobs Evan Spiegel, 23, and Bobby Murphy, 25, had were as fraternity brothers at Stanford. So why would Facebook CEO Mark Zuckerburg reportedly offer a pair of 20-somethings so much money? In short, people–some people at least–think Snapchat is a good idea that has a lot of potential. Read More: Teens Leaving Facebook For These Sites Between June and September, the company nearly doubled the number of users sending messages or “snaps” from 200 million a day to 350 million a day. Spritz. Germany v Google. LONDON – American tech companies are under unprecedented attack by European Union regulators. 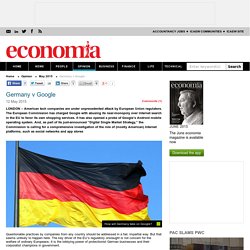 The European Commission has charged Google with abusing its near-monopoly over Internet search in the EU to favor its own shopping services. It has also opened a probe of Google’s Android mobile operating system. And, as part of its just-announced “Digital Single Market Strategy,” the Commission is calling for a comprehensive investigation of the role of (mostly American) Internet platforms, such as social networks and app stores Questionable practices by companies from any country should be addressed in a fair, impartial way. But that seems unlikely to happen here. Germany’s government boasts about how “globally competitive” the country is, and its officials lecture their EU peers on the need to emulate their supposed reformist zeal. With Germany’s digital start-ups stifled by overregulation and underinvestment, dinosaurs from the analogue world set the policy agenda. 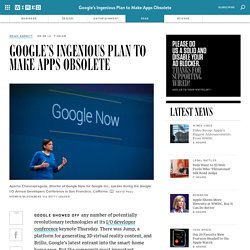 There was Jump, a platform for generating 3D virtual reality content, and Brillo, Google’s latest entrant into the smart-home horse race. But the company’s most important announcement was the evolution of a technology that’s nearly three years old. It laid out a course for making apps obsolete and getting users back onto the web, where Google is master. And that course is paved by Google Now. Getting To Now Google Now project manager Aparna Chennapragada presented a vision for Now in which it not only provides all the information you could possibly need, but also knows when you need it and in what form. More impressive, though, might be Google Now’s contextual awareness, its ability to know where you are and what you might need there.