Rage and Refuge: German Asylum System Hits Breaking Point. "Their villages are bombed, then they come here and they are called criminals," says Turgay Ulu, a Turkish journalist and former political prisoner who came to Germany about two years ago as an asylum seeker. 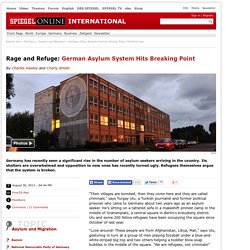 He's sitting on a tattered sofa in a makeshift protest camp in the middle of Oranienplatz, a central square in Berlin's Kreuzberg district. Ulu and some 200 fellow refugees have been occupying the square since October of last year. "Look around! Germans Open Their Homes To Refugee Roommates : Parallels. Berlin residents Mareike Geiling (left) and her boyfriend, Jonas Kakoschke, speak with their roommate, a Muslim refugee from Mali. 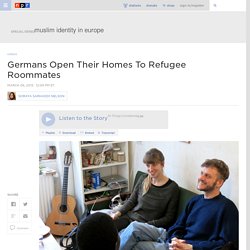 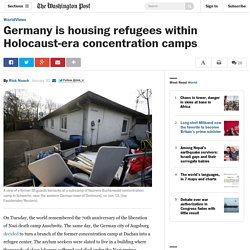 (Ina Fassbender/Reuters) On Tuesday, the world remembered the 70th anniversary of the liberation of Nazi death camp Auschwitz. The same day, the German city of Augsburg decided to turn a branch of the former concentration camp at Dachau into a refugee center. The asylum seekers were slated to live in a building where thousands of slave laborers suffered and died under the Nazi regime. The Dachau outpost is not the only concentration camp site that is being turned into a refugee center in Germany.

In Germany, refugees seek fair treatment. Berlin, Germany - Hakim Bello doesn't like to be called a refugee, because that implies he's from somewhere else and you're from here, and the one has nothing to do with the other. 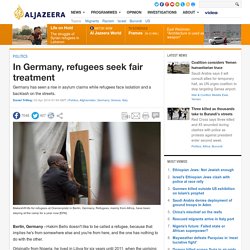 Originally from Nigeria, he lived in Libya for six years until 2011, when the uprising against Colonel Muammar Gaddafi - and the subsequent NATO intervention - made life there untenable for black Africans like him, who became the target of racist attacks. Like thousands of others, he crossed the Mediterranean by boat, landing on the Italian island of Lampedusa, where he was transferred between reception centres "like a business toy", before being released.

Now, the 32-year-old explains all this perched on a park bench in Berlin, outside the protest camp he has called home for the past year. "They say I'm illegal," Hakim says. "So I'm putting it in their face: I'm illegal. " Many complain about the resulting isolation, compounded by delays in processing their claims. 'Flowers, candles and coffee were waiting for us': Syrians find warm welcome ... Germany. 2015 UNHCR subregional operations profile - Northern, Western, Central and Southern Europe | Overview | The number of asylum applications received in 2014 in European Union (EU) Member States has risen by 25 per cent compared to the same period in 2013. 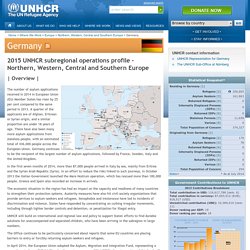 A quarter of the applicants are of Afghan, Eritrean or Syrian origin, and a similar proportion are under 18 years of age. There have also been many more asylum applications from stateless people, with an estimated total of 436,000 people across the European Union. Fleeing violence, Syrian refugees find new homes in Germany. In the past two years, Germany has pledged to admit 30,000 Syrians on humanitarian grounds, a number that is higher than the quotas of the rest of Europe, Australia and Canada combined. 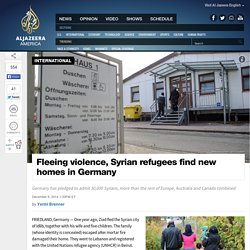 Ariane Rummery, spokeswoman for UNHCR, described Germany’s humanitarian admission program as generous. She suggested such initiatives, in which legal pathways to Europe for refugees are created, could help address the rising death toll in the Mediterranean Sea’s human-trafficking routes. “Certainly the lack of safer and legal alternatives to find protection in industrialized countries is part of what drives people to take dangerous sea journeys or other so-called irregular movements,” said Rummery, adding that humanitarian admission scheme practiced by Germany should serve as an example for other governments. Syrian Refugees. Interview with Claus Sørensen, Director-General of the Directorate-General Humanitarian Aid and Civil Protection at the European Commission. 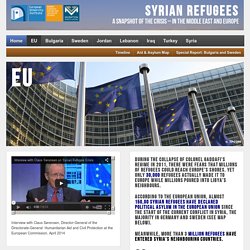 April 2014 Migration Policy Centre Policy Brief The Mediterranean Sea is the most porous border between Europe and its neighbours and the world’s most dangerous border between countries that are not at war with each other. Three facts emerge: sea routes to Europe are anything but new; places of embarkation and disembarkation have changed in relation to controls; and the risk of dying at sea has considerably increased over the last decade. Download the full Policy Brief European Union Case Studies The European Union (EU) is leading international humanitarian aid to Syria and neighbouring countries, with over €2 billion distributed in humanitarian aid as of October 2014.