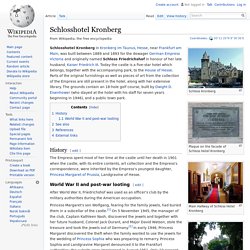 Today the castle is a five-star hotel which belongs, together with the accompanying park, to the House of Hesse. Battle of Hürtgen Forest. The Battle of Hürtgen Forest (German: Schlacht im Hürtgenwald) was a series of fierce battles fought from 19 September to 16 December 1944 between U.S. and German forces during World War II in the Hürtgen Forest about 50 sq mi (130 km2) east of the Belgian–German border. 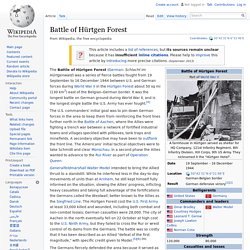 It was the longest battle on German ground during World War II, and is the longest single battle the U.S. Army has ever fought.[4] The U.S. commanders' initial goal was to pin down German forces in the area to keep them from reinforcing the front lines further north in the Battle of Aachen, where the Allies were fighting a trench war between a network of fortified industrial towns and villages speckled with pillboxes, tank traps and minefields.

A secondary objective may have been to outflank the front line. The Americans' initial tactical objectives were to take Schmidt and clear Monschau. Hamburg. Official logo of the Free and Hanseatic City of Hamburg Hamburg (/ˈhæmbɜːrɡ/; German pronunciation: [ˈhambʊʁk], local pronunciation - [ˈhambʊɪ̯ç]; Low German/Low Saxon: Hamborg - [ˈhambɔːx]), officially Freie und Hansestadt Hamburg[4] (Free and Hanseatic City of Hamburg), is the second largest city in Germany and the eighth largest city in the European Union.[5] It is the second smallest German state by area. 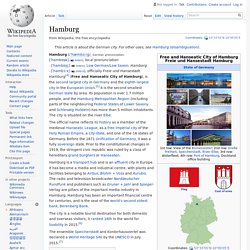 Its population is over 1.7 million people, and the Hamburg Metropolitan Region (including parts of the neighbouring Federal States of Lower Saxony and Schleswig-Holstein) has more than 5 million inhabitants. The city is situated on the river Elbe. Hamburg is a transport hub and is an affluent city in Europe. It has become a media and industrial centre, with plants and facilities belonging to Airbus, Blohm + Voss and Aurubis. Black Forest. Geography[edit] 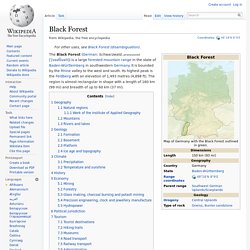 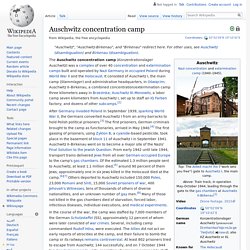 It consisted of Auschwitz I (the original camp), Auschwitz II–Birkenau (a combination concentration/extermination camp), Auschwitz III–Monowitz (a labor camp to staff an IG Farben factory), and 45 satellite camps. Auschwitz I was first constructed to hold Polish political prisoners, who began to arrive in May 1940. The first extermination of prisoners took place in September 1941, and Auschwitz II–Birkenau went on to become a major site of the Nazi "Final Solution to the Jewish question". From early 1942 until late 1944, transport trains delivered Jews to the camp's gas chambers from all over German-occupied Europe, where they were killed with the pesticide Zyklon B. History Background Subcamps. Potsdam. Hohenzollern Castle. Hohenzollern Castle (German: A popular tourist destination, Hohenzollern castle has over 300,000 visitors per year, making it one of the most visited castles in Germany.[1] 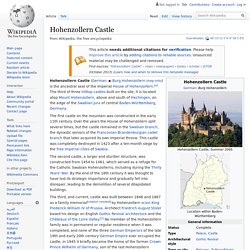 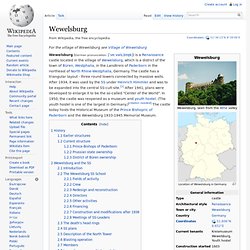 Baden-Baden. Majdanek concentration camp. Unlike other similar camps in Poland, Majdanek was not located in a remote rural location away from population centres, but within the boundaries of a major city (see also: Nisko Plan preceding the formation of the Ghetto).[3] This proximity led the camp to be named 'Majdanek' ("little Majdan") by local people in 1941 because it was adjacent to the city's district of Majdan Tatarski ("Tatar Maidan") in Lublin. 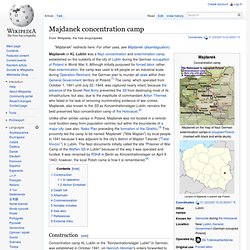 The Nazi documents initially called the site "Prisoner of War Camp of the Waffen-SS in Lublin" because of the way it was operated and funded. It was renamed by RSHA in Berlin as Konzentrationslager on April 9, 1943; however, the local Polish name is how it is remembered.[4] Construction[edit] Concentration camp KL Lublin or the "Konzentrationslager Lublin" in German, was established in October 1941, on Heinrich Himmler's orders forwarded to Odilo Globocnik soon after his visit to Lublin on 17–20 July 1941. In operation[edit] Preserved crematorium ovens (closeup) Death toll[edit] City Palace, Berlin. The Berliner Stadtschloss (or Stadtschloß) in a 19th-century painting The palace was originally built in the 15th century and changed throughout the next few centuries. 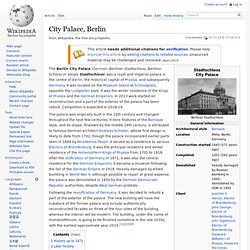 It bore features of the Baroque style, and its shape, finalised by the middle 18th century, is attributed to famous German architect Andreas Schlüter, whose first design is likely to date from 1702, though the palace incorporated earlier parts seen in 1688 by Nicodemus Tessin. It served as a residence to various Electors of Brandenburg.