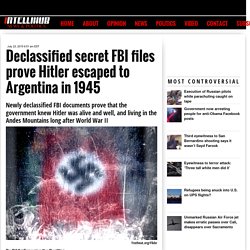 His body was later discovered and identified by the Soviets before being rushed back to Russia. Or was it? Is it really possible that the Soviets have been lying all this time, and that history has purposely been rewritten? No one thought so until the release of the FBI documents. The Intelligence Community Knew Recently released FBI documents are beginning to show that not only was Hitler and Eva Braun’s suicide faked, the infamous pair might have had help from the Swiss Director of the United States OSS himself, Allen Dulles. In one FBI document from Los Angles, it is revealed that the agency was well aware of a mysterious submarine making its way up the Argentinian coast dropping off high level Nazi officials. Who is the Mysterious Informant? The Argentinian government not only welcomed the former German dictator, but also aided in his hiding.

Advertisement. George Orwell Reviews Mein Kampf (1940) Christopher Hitchens once wrote that there were three major issues of the twentieth century — imperialism, fascism, and Stalinism — and George Orwell proved to be right about all of them. 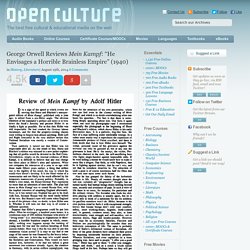 Orwell displays his remarkable foresight in a fascinating book review, published in March 1940, of Adolf Hitler’s notorious autobiography Mein Kampf. In the review, the author deftly cuts to the root of Hitler’s toxic charisma, and, along the way, anticipates themes to appear in his future masterpieces, Animal Farm and 1984. The fact is that there is something deeply appealing about him. […] Hitler … knows that human beings don’t only want comfort, safety, short working-hours, hygiene, birth-control and, in general, common sense; they also, at least intermittently, want struggle and self-sacrifice, not to mention drums, flags and loyalty-parades.

However they may be as economic theories, Fascism and Nazism are psychologically far sounder than any hedonistic conception of life. Mein Kampf. 9. 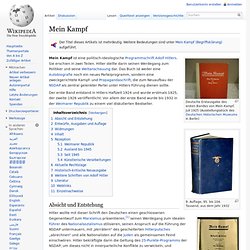 The Rise of the Third Reich. Nazi Camps. INTRODUCTION Between 1933 and 1945, Nazi Germany established about 20,000 camps to imprison its many millions of victims. 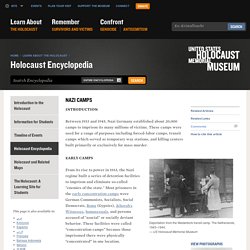 These camps were used for a range of purposes including forced-labor camps, transit camps which served as temporary way stations, and killing centers built primarily or exclusively for mass murder. EARLY CAMPS From its rise to power in 1933, the Nazi regime built a series of detention facilities to imprison and eliminate so-called "enemies of the state. " Most prisoners in the early concentration camps were German Communists, Socialists, Social Democrats, Roma (Gypsies), Jehovah's Witnesses, homosexuals, and persons accused of "asocial" or socially deviant behavior. These facilities were called “concentration camps” because those imprisoned there were physically “concentrated” in one location. Following the June 1941 German invasion of the Soviet Union, the Nazis increased the number of prisoner-of-war (POW) camps.

Concentration Camps, 1933–1939. Concentration camps (Konzentrationslager; abbreviated as KL or KZ) were an integral feature of the regime in Nazi Germany between 1933 and 1945. 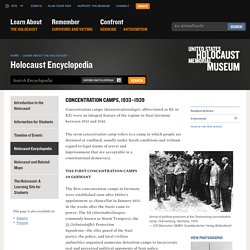 The term concentration camp refers to a camp in which people are detained or confined, usually under harsh conditions and without regard to legal norms of arrest and imprisonment that are acceptable in a constitutional democracy. THE FIRST CONCENTRATION CAMPS IN GERMANY The first concentration camps in Germany were established soon after Hitler's appointment as chancellor in January 1933. In the weeks after the Nazis came to power, The SA (Sturmabteilungen; commonly known as Storm Troopers), the SS (Schutzstaffel; Protection Squadrons—the elite guard of the Nazi party), the police, and local civilian authorities organized numerous detention camps to incarcerate real and perceived political opponents of Nazi policy.